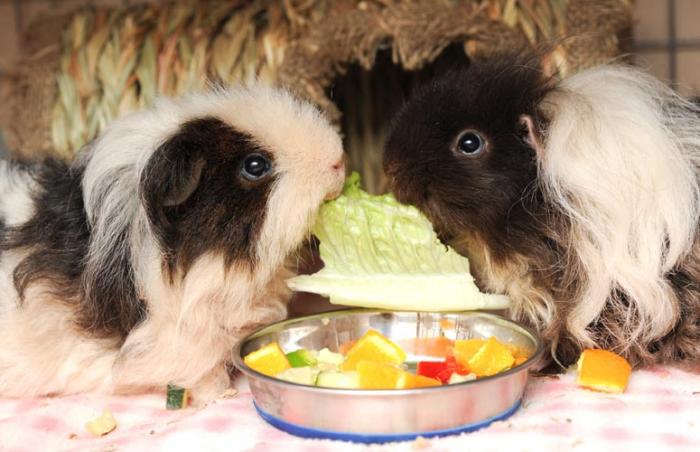 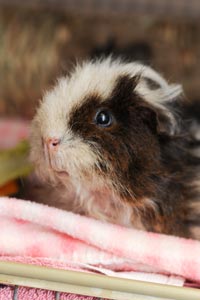 To look at Furby and Chewy running around in their enclosures and making happy little squeaking sounds, you’d never know that these two female guinea pigs came to the Sanctuary in such poor condition. They’d been living in a hoarding situation, left in their cages in a dark room. Not only were the poor pigs starved for human attention, their little bodies were severely malnourished and lacking in vitamin C – a deficiency that can be fatal for guinea pigs.

As soon as Furby and Chewy arrived at the Bunny House, caregivers began giving them intensive care. The first order of business was changing their diets. Besides high-quality pelleted food, guinea pigs also require a variety of fresh fruits and vegetables to stay healthy and happy. So Bunny House caregivers chopped up generous portions for the girls – fresh oranges, tomatoes, blueberries, cucumbers and peppers. But Furby and Chewy had likely never seen such a feast. They were used to low-quality “junk food” and didn’t even recognize some of the fruits and veggies as something they could eat. And they preferred plain pellets over colorful salads.

Caregivers had to get creative. First, they gave the girls vitamin C shots so they wouldn’t get sick. But nobody likes shots. Caregivers had to find a way to get the girls to eat their vegetables, so they could get enough vitamin C naturally. Furby and Chewy were game. Caregivers finely chopped up the vegetables so they were the same size as the pellets the guinea pigs were eating. They decided to try them, and they found them delightful. In just a short amount of time, the girls began to look forward to their fruits and veggies, and to feel much better. Now, instead of getting shots, they run up to their bowls the minute they’re set down and start munching on the fruit and vegetable medley. 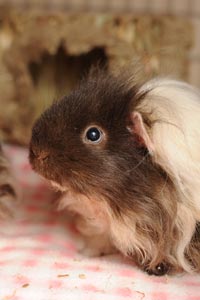 Not only have Furby and Chewy come to look forward to healthy meals, they are more amenable to human affection now. Because they’d been ignored for so long, they were shy and reserved around people when they first came to the Sanctuary. But lots of love and TLC have helped them feel better about that. Though Chewy is still a bit bashful, they are both well on their way to becoming loving family pets. “They've learned to enjoy being spoiled,” says caregiver Bryan Elliott.

Now that the guinea pigs are getting plenty of nutrition and love, caregivers will begin to work on their neglected coats. Furby and Chewy (named after Chewbacca) got their names because of their long black-and-white fur. Neglect and malnutrition, however, left their coats coarse and a bit patchy. But with better care and grooming, their fur will soon be smooth, shiny and luxurious.

While the two wait for homes of their own, they’re living the best possible life. After living in the dark for so long, they relish outdoor time. When caregivers place them in a large enclosure on the Bunny House patio, they get to bask in the warm desert sun, burrow in piles of sweet-smelling hay, and greet everyone who stops by. The girls are thriving with care and love — and the healing energy of the Sanctuary. That’s certainly worth squeaking about.