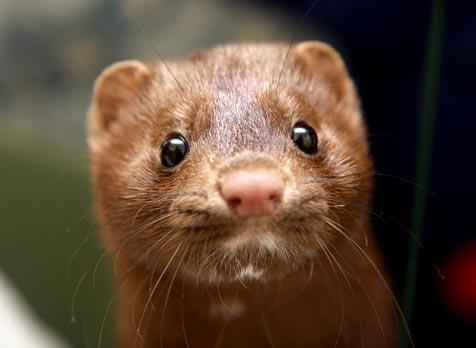 Pixie is a year old, feisty, and obviously well recovered from six months spent in a shelter surrounded by dogs and cats. When Best Friends received the mink in March, she was fearful and rather aggressive. But, after a few weeks away from the barking and meowing, she’s now racing around her enclosure, dipping into the water bowl, and making the most of her chew toys.

Pixie was turned in to Nevada Humane Society, which kept her in its Reno shelter for lack of anywhere else to put her. Knowing it wasn’t an ideal situation for the critter, the humane society contacted Best Friends wildlife rehabilitator Carmen Smith and asked if Best Friends could give her a permanent home. Carmen was happy to oblige.

Genetically engineered to produce the luxury fur coats that have unfortunately become synonymous with the animals, minks are prone to developing tumors. So far, though, it appears the new arrival is in good health. Soon she’ll move into her own enclosure, located in the neighborhood of Raissa and Snitch, the sanctuary’s two other minks.

Find out about wildlife rehabilitation at Best Friends Animal Sanctuary.