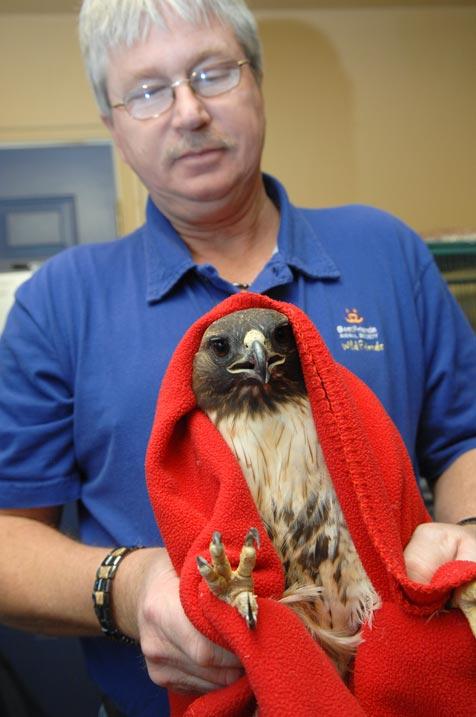 It’s a wonder that she can see, let alone that she’s still alive.

A couple saw the red-tail hawk get hit by a car while the bird was feeding on roadkill along the side of the highway in a canyon near Best Friends. The good Samaritans immediately called Wild Friends.

She was in respiratory distress when Best Friends’ wildlife rehabilitators Carmen Smith and Barbara Weider inspected her. She was also bleeding from one eye, and unable to see from both. All signs pointed to head trauma.

Carmen and Barbara gave the hawk full supportive care, including oxygen and an anti-inflammatory medication to prevent her brain and eyes from swelling anymore than they had already. They had to feed the hawk by hand, since the bird was unable to see the food in front of her.

"Both her eyes were still intact, so we had hope that her sight would return," Barbara says.

They were right to have hope. It’s taken a few months, but the hawk has rebounded. 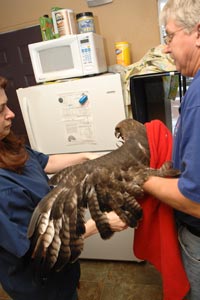 "She has now progressed very gradually from complete blindness, to making out shadows and movement, to being able to see her food," Barbara reports. "Her eyesight isn’t perfect yet, but given her progress we are confident that she will regain full sight and be released back into the wild."

The hawk is, by no means, the first raptor that Wild Friends has treated who has been hit by a car while eating roadkill. It’s more common than one would think. Drivers presume a bird will fly away when they’re approaching. But sometimes the bird in question, especially if he’s a large bird, will have gorged himself and be too heavy to make a quick get-away. Often, birds just wait for the last possible minute and misjudge their timing.

A good rule of thumb then is to slow down, way down, if you see birds feeding from carrion on the side of the road while you’re driving. You might even want to honk your horn for good measure.

And if you have the misfortune to hit and kill an animal while you’re driving, stop and drag the animal at least 10 feet away from the side of the road. That way, no animal will be in danger while feeding on the one you’ve struck.

Two sapsuckers, one with a broken wing and the other with head trauma

Though sapsuckers are fairly common birds in Utah and northern Arizona, it’s not often that Wild Friends receives one. It was therefore rather coincidental, and fortuitous, that they would arrive within a week of each other — fortuitous, because an animal’s rehabilitation often goes much easier when there’s another of the same species to go through it with. For the two sapsuckers—one found on Cedar Mountain (a high-elevation plateau north of Best Friends) and the other in Escalante, Utah — that turned out to be the case.

The first sapsucker to arrive was an adult male with a broken wing. The best treatment for such an injury is often a splint and time. A bird can easily recover from a broken wing when the break is simply allowed to callus.

Over about a month, the sapsucker’s wing healed just as it should with just the splint and no surgery. "When you look at the x-ray now, you’d never know he had broken his wing," Barbara says.

The second sapsucker, probably a first year, came in with head trauma. A person found him on the ground, wobbly on his feet and unable to fly — most likely having flown into a window.

Barbara placed the two birds in adjacent cages, so they could at least hear and see each other and know they had company of their own kind. After a few weeks, they moved together into a larger, single enclosure, first during the day to see how they got along. Once it was clear the two got along marvelously, the younger sticking close to his elder, they stayed together around the clock.

A kind of woodpecker, sapsuckers feed from the insides of tree trunks, so are programmed to perch on vertical surfaces, and not horizontal. Wild Friends therefore has to design their enclosures to suit their perching method. And that means lots of upright tree branches and other vertical surfaces they can cling to and feed from.

Sapsuckers, at least in the West, spend the warmer months at high elevations, then come to the lower elevations for the winter. Though the two at Wild Friends had arrived from the high country, Carmen and Barbara were able to release them at Best Friends, which is at the elevation sapsuckers in southern Utah are now wintering at.

A bird’s initiation to flying is pretty rough as it is. Many end up falling from the nest to the ground, where they’ll stay until they finally launch themselves back into the air. For one kingbird, however, things only got worse after he fell.

A dog bit his foot.

To add insult to injury, the folks who found him didn’t realize the severity of the injury and waited five days before bringing him to Wild Friends. In that time, his foot swelled to the point that his toes stopped receiving blood. Soon after he arrived, two of them fell off. 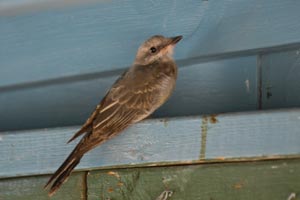 Carmen and Barbara weren’t sure they would be able to save the other two toes, which included the rear one. The kingbird would have to stay off the foot as much as possible, which meant leaning against something while balancing on the good foot. So they created a special perch that allowed him to do just that. The perch worked, and the two toes healed. He can now perch normally on both feet.

The kingbird is ready to be released. Unfortunately, he missed the fall migration, which means he’ll have to wait for his fellow kingbirds to return in the spring before he can go.

A state- and federally-licensed wildlife rehabilitation center at Best Friends, Wild Friends treats injured and orphaned animals with the goal of releasing them back into the wild. Wild Friends also serves as an educational center for wildlife conservation.

This occasional feature highlights some of the hundreds of animals — the birds, mammals, amphibians and reptiles — who pass through Wild Friends every year, as well as those who can’t be released and remain as educational animals at the Sanctuary.