Saving 800 puppies and dogs: That’s what Best Friends is working on right now with our partners at Palm Valley Animal Center in Edinburg, Texas, just this side of the Mexican border.

The shelter is working hard to save more lives than ever before, but there’s a long way to go. With hundreds of animals coming into the shelter every week and not enough resources to get them all adopted locally, transport is a way to start saving lives immediately while new programs ramp up to counteract the influx of animals.

About the 800 pups project

Hundreds of dogs and puppies have already left the shelter on transports across the country, and last week 58 pups went to Boise Idaho.

Heidi Losleben, a copywriter at Best Friends and colleague Linda Blauch who works in human resources, spent time helping at the Palm Valley Animal Care Center. When asked if they’d be willing and able to drive dogs from Texas all the way to Idaho, they said yes. The trip covered 2,000 miles over three days with stops at rescue partners along the way.

Anyone who works in animal rescue knows it’s not a 9 to 5 gig. So when you’re asked to show up at an adoption center at 5:30 a.m. to help save some lives, you show up. And while 4 a.m. might not be your preferred wake-up time, you get excited. The dogs and puppies are counting on you. Today is their lucky day and they don’t even know it.

To say it’s “complicated” to transport 58 dogs from Texas to Idaho is a vast understatement. The paperwork that gets them out of the state is staggering, and the logistics mind-boggling. How do you decide which dogs should go? How many drivers will be needed? How many rescue groups are willing to take dogs? How in the world do you fit them all in a Ford Sprinter? Where in the heck can you find a place to stay with that many dogs? 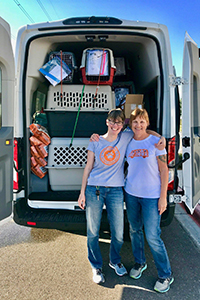 So it’s pretty remarkable that I find myself hauling tail (actually 58 tails) northward on Texas Highway 137 to Albuquerque on the first leg of a 2,000-mile transport as part of Best Friends’ 800 Pups project. Right now, my greatest hope is my unstoppable co-driver Linda Blauch and I can make it to our first stop at the City of Albuquerque Westside Animal Shelter before midnight. It’s 7:21 p.m. and we’ve got 400 miles to go.

Linda and I arrived at the Albuquerque shelter at 12:40 a.m. The van had stopped moving, but our bodies couldn’t seem to process this. Our legs were unsteady and we felt like we had just stepped on land after a bumpy boat ride.

We made a beeline for the bathroom (Hey, I’m being honest!). And then we introduced ourselves to our incredibly gracious hosts. Julie, the shelter’s outreach program manager, was there along with seven volunteers. They were all up early to help us unload the van, walk pups (if they were old enough), water, clean kennels and then house all 58 dogs for the night. We were beyond grateful. They embraced each pup as if he or she was their own pet, showering them with love and affection. 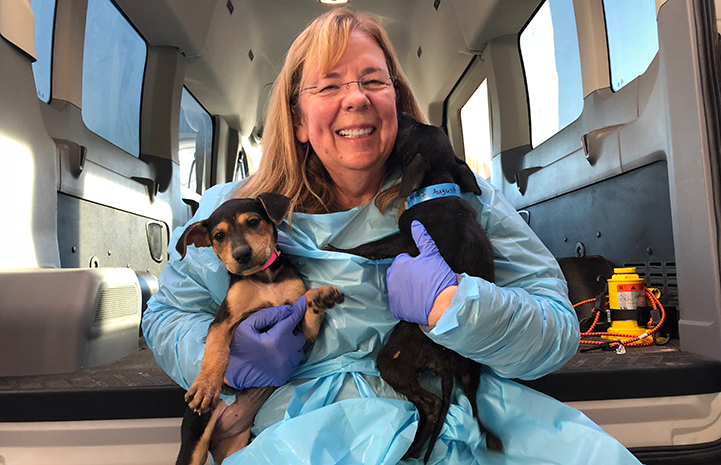 It was truly heartwarming to meet so many people willing to offer such kindness to complete strangers. It’s amazing how a love of animals can instantly unite people.

Puppies not old enough to be walked had to be held while someone cleaned their kennels, where they had been confined most of the day. Being puppies, they had a lot of energy to burn and Julie offered to let us put them in the shelter’s pristine stainless steel kennels. That helped enormously as it freed up more people to help with other tasks, and it also made cleaning the puppies’ crates that much easier. Plus, the puppies had a little more space to romp around.

Once all the kennels were cleaned and the puppies were given water and food, we walked groggily to the van. At this point, it was a challenge to place one foot in front of the other. When we finally checked into a nearby hotel, it was 2:19 a.m. and we had gained an hour for the rollback of daylight saving time. I’ve never been so eager for an extra hour! 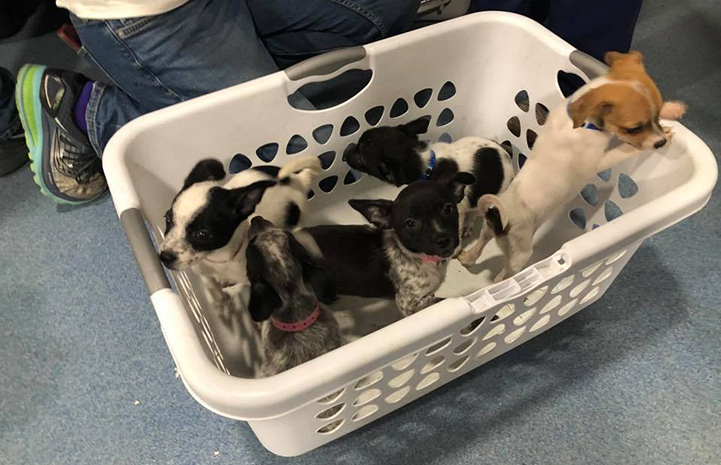 Back on the road to Utah

On Sunday at 6 a.m. we were back at the Albuquerque shelter to once again walk, water and feed the dogs and clean kennels. After a chaotic night, we were more organized this time. Each of the kennels had a numbered zip-close bag with pup paperwork inside. As the kennels were cleaned, we moved them to the other side of the room and placed them in numerical order so we could load the van more efficiently. This also served as a quick way to tell which kennels had been cleaned and which kennels hadn’t. “We’ve got a Code Brown over here” was a phrase heard quite often as we went about our cleaning.

Then came the challenge of fitting all 33 crates in our van — exactly the way they were before. Thankfully, we weren’t starting from scratch. Jay Garret, Best Friends lifesaving programs manager back in Edinburg, had made a drawing we could follow. And we did — religiously. (Thanks, Jay!) It was me, Linda and Valorie (one stalwart volunteer) working closely together. We did it. I was so, so proud. I wanted to bask in the glory of it all, but there wasn’t time. We set off for Salt Lake City around 10:30 a.m. 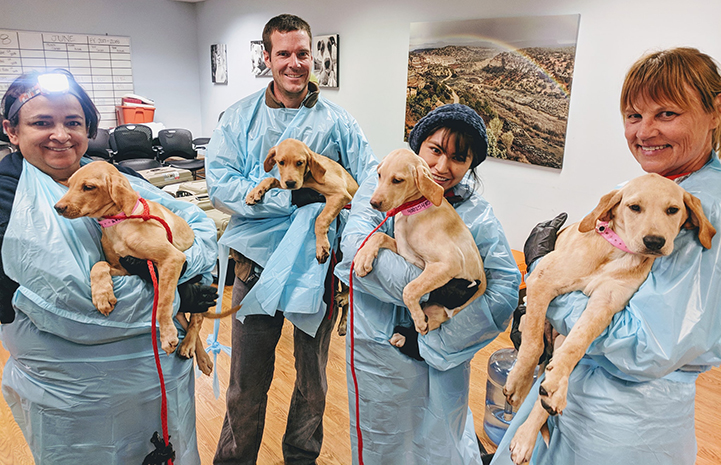 Along the way, we blindly followed Google Maps. For the most part we had no idea what state we were in at any given moment. We saw a sign that said, “State Line, 5 miles” and we guessed as to which state the sign referred to. They all passed by in a blur.

We were making good time to Salt Lake City when we got caught in a snowstorm. Yes. You read that right — a snowstorm. We were on a super curvy mountain road. (Is there any other kind?) Visibility was horrific. I happened to be driving. Since I’m from Minnesota, you would think I could take this in stride. And I certainly have driven in similar conditions back home, but not with 58 dogs counting on me to get them to safely.

We gave the Salt Lake City crew a heads-up that we would be late and kept plowing through the madness. Linda was an incredible co-pilot, helping guide me along as my knuckles got whiter and whiter. After what seemed like a lifetime (but was probably only 15 minutes), we had descended and the snow turned to rain that eventually stopped completely.

It was about 8:45 p.m. when we pulled into the parking lot of the Best Friends Pet Adoption Center in Utah. The lot was filled with more than a dozen staff and volunteers. They were so happy and excited to lend a hand that I burst into tears at the sight of them. 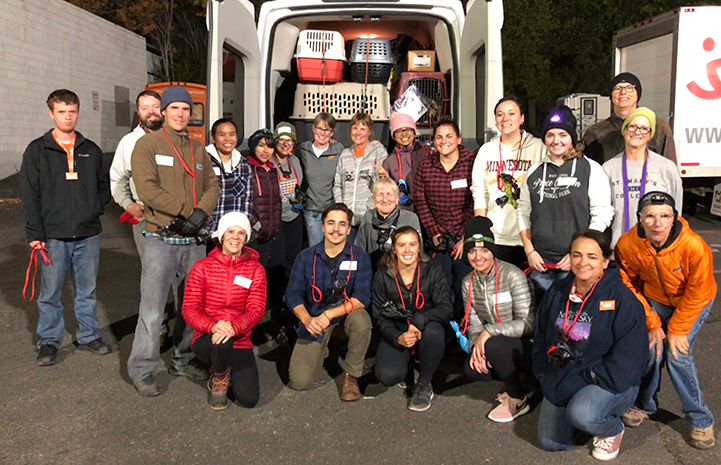 Once again, we walked, watered and fed the dogs and cleaned kennels. With so many helping hands, we were able to wrap up quickly and we were in our hotel by 11 pm. Linda and I celebrated with our first non-gas station meal of the trip. A delivery pizza never tasted so good.

The next morning, I felt as if I was caught in a Groundhog Day remake as we walked, watered and fed the dogs, and then cleaned their kennels. Again, the large number of staff and volunteers who showed up was impressive and so, so inspiring. Lindsay Hooker, the volunteer coordinator at Best Friends in Utah, said there was a waiting list of people willing to help out. It is hard to describe how grateful Linda and I were.

It was hard to believe everything that had happened since leaving our hotel. Again, we loaded up the van using Jay’s drawing (Thanks again, Jay) and hit the road. Boise was (almost) in sight.

After 10- and 15-hour drives, five hours felt like nothing. Plus, it was all daytime driving and the terrain was completely flat. We received a map of where we were supposed to meet up with the four rescue groups (Idaho Humane Society, MCPAWS Regional Animal Shelter, Panhandle Animal Shelter and West Valley Humane Society) that were picking up the pups. After we pulled in and parked, we opened the back of the van and I called out each dog’s name so that groups could claim their dogs. Linda checked names off the list and we kept going until all the crates were out.

I felt a little like Santa Claus. I have never witnessed so many instances of love at first sight. As I handed out the crates, I could hear the people oohing and aahing over their pups. Over the past two days, Linda and I had grown to love each and every one of the dogs in our van. And now they would have new people to love them. While the dogs and puppies were not technically home, they were at least one step closer. After double-checking that each group got the right dogs, Linda joined me in breaking down the crates. We cleaned them up the best we could and put them back in the van, but not before taking a quick pic of my favorite photo of the trip — an empty van.

So, I’m home now and trying to process everything that’s happened in the last week. It’s a lot to take in. Being a part of transport was exhausting, exhilarating, frustrating, intense, amazing, difficult and satisfying all at once.

It is truly mind-blowing to think of all the people who made it happen: those who purchased gift cards for gas and booked the hotels, those who cared for the puppies and dogs before they were put on the transport, those who created the list of dogs to be transported, and those who worked with the rescue groups to take them in. I don’t know all their names, much less how to thank them for their efforts. 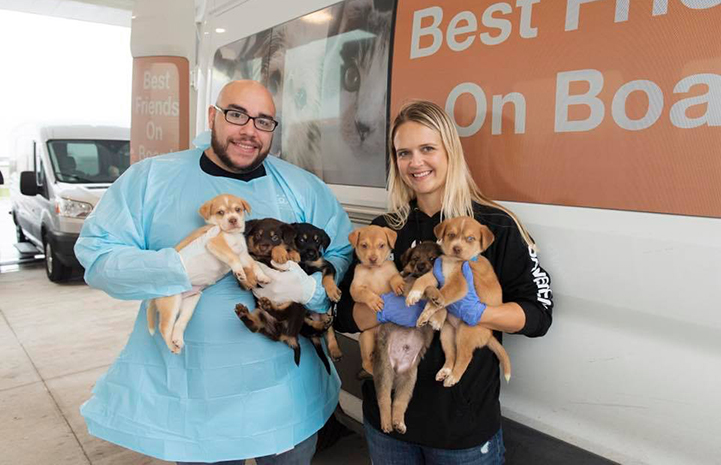 Find out how you can help Save Them All