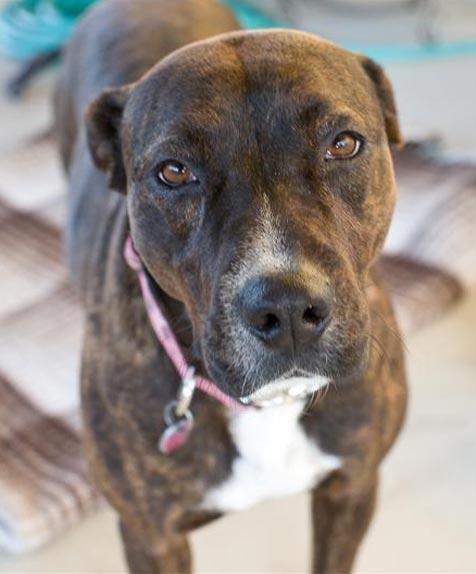 A twist of fate for pit bull terrier dog

When Tana Seaford of Westminster, California, took Olivia the dog on a sleepover at Best Friends, she had a lot of fun making a new friend. But what she didn’t know was that while Olivia wasn’t quite the one for her, she was about to lead her to the dog who was!

Imagine Tana’s surprise when, for a moment, she thought she’d bumped into Olivia again the very next day at a local restaurant. At second glance, she realized the pit bull terrier dog wasn’t Olivia. There were just a lot of similarities, enough to grab Tana’s attention. Funny thing, though, this new girl was also a Best Friends dog on a sleepover. Tana was intrigued and wanted to get to know the new dog, Whitney, a bit better. So she learned from the four gals who were entertaining Whitney for the evening that they’d be bringing her back to the sanctuary the next day.

The following morning, Tana was waiting at Dogtown headquarters when Whitney came back from her sleepover. Whitney didn’t even make it back to her play area. Tana snatched her up for a two-day sleepover. By the end of the two days, Tana was smitten in a big way. Adoption tugged at her. But she had one concern: She didn’t know how Whitney would react to her cat and dog back home.

Lady Luck continued to smile on Tana. There was a Best Friends super-adoption event scheduled in Los Angeles, not far from Tana’s home. The Best Friends staffers going to the event offered to bring Whitney along for the ride, so she could have a weekend sleepover with Tana at her home. That proved to be Whitney’s ticket to paradise. She behaved perfectly the whole time. When the weekend sleepover was done, Whitney showed up with a pink collar upgrade! That’s when the adoption staff knew it was a sealed deal.

And it couldn’t have happened to a more deserving dog. Whitney was found abandoned nearly two years ago. She’d been wandering around in the middle of nowhere with a leash dangling from her neck. No fun! After such a run of bad luck, her turn finally came. All because she looked like another dog who had been willing to make a friend.

And more good news; Olivia's found a home, too!

Adopt a pit bull or other great dog from Best Friends