Cinema may have "101 Dalmatians," but Best Friends has had 101 adoptions out of our new Cat Headquarters building.

Like the movie, things got a little dicey for the kitten who was selected for the landmark adoption (and we don't even have a Cruella de Vil), but it all worked out in the end.

A pair of six-week-old kittens came out of a thicket of cacti and were discovered by Best Friends Animal Care operations assistant Cindy Smith. It's a good thing that Cindy rescued the kittens who were alone and unable to fend for themselves. Chausette and Moufle were dehydrated, and Chausette's neck was covered in cactus spines. Ouch!

Cindy raised the siblings in her home, with field trips to the office, until they were old enough to be fixed and put up for adoption. That's when they came to Cat Headquarters.

While a love connection is the most important element in making an adoption work, Cat Headquarters was built to help facilitate such matches. And it's obviously working with over 100 adoptions in the one year since its grand opening.

At any given time, roughly 40 felines live in the building's 20 rooms, which provide living arrangements for cats who require special diets or who don't get along with other cats.

"It's given us flexibility we've never had before," says Cat World manager Michelle Warfle. "There's more space, fewer cats. Cats have their own private space, so we can help them bring out the best of their personalities." 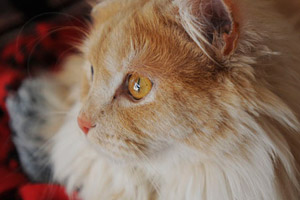 Carmello was a diamond in the rough.

While each and every adoption is special, there have been some real standouts over the year. Carmello let it be known in no uncertain terms that he didn't like other cats. "He was a sweetheart and then turned into a monster when he got into rooms with other cats," recalls Michelle. Then he got his own room as the first resident of Cat HQ. Michelle says, "Within a few days, he was back to the snuggle-bunny that he was before." It wasn't long before he was adopted.

And there's Smokey, who moved to Cat Headquarters so her long-term physical therapy and special diet needs could be accommodated. With so many folks visiting HQ, she too was quickly adopted.

The Cat Headquarters rooms are also perfect for accommodating litters of kittens once they're ready to be adopted. That extra exposure to visitors and volunteers has resulted in a bumper crop of kittens finding their forever homes.

Who can resist cute kitten faces? Apparently not Mark Anzalone. 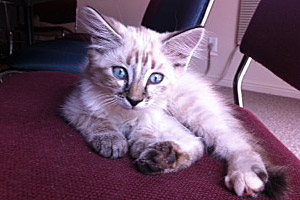 From a cactus patch to a loving home

Little did he know that this was to be the 101st adoption from Cat Headquarters. In fact, he didn't even know he was in the market for a feline friend. Mark was visiting Best Friends to look at the horses and scout potential cats for his mom. And that's when it happened - he fell in love.

He ended up adopting Chausette. She brings new life to his home after his Amazon parrot of the past 51 years recently passed away. Now renamed Princess, the kitten follows Mark around the house, sleeps in his lap, and waits by the door when he steps out.

However, Mark's mom was not too pleased. She wanted Princess for herself.

No worries, Princess' sister Moufle still needed a home. So Mark arranged for his mom to adopt, thus making it 102 felines adopted out of Cat Headquarters.

Though the feline siblings may lack spotted coats and wagging tails, like their classic Disney Dalmatian counterparts, they'll live happily ever after.

Word is now out. Cat Headquarters residents are available for adoption and make fabulous companions. Check out our HQ Adorable Adoptables.