Esther’s life started out precariously on the streets of Hell’s Kitchen, a busy area of New York City. The tiny striped kitten was originally whisked out of harm’s way by Animal Care and Control of NYC. Best Friends–New York admitted Esther to its foster care and adoption program so she could get the TLC a young kitten would need to grow healthy and find a new home. As she grew, so did her personality, and it was her budding charms that helped secure for her a forever family. 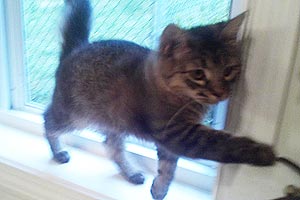 When the cute kitten was ready for her own home, Best Friends–New York began networking her to potential adopters. As soon as Barbara Bergeron saw Esther’s photograph, it was love at first sight. She immediately ran into the other room to show the photo to her fiancé, Paul.

“Although I live in Connecticut, and the kitten was in a foster home on the Upper East Side of Manhattan, I knew I had to meet her,” says Barb. Within days of seeing the photo, Barb and her sister drove to pick her up and take her home. “We brought a cat carrier, but she sat in my sister’s lap the whole way home, just loving the attention,” says Barb.

Barb and Paul had the house readied in advance for their new family member: The litter box, cat food and scratching posts were all in place for Esther’s arrival. Esther immediately made herself right at home. But then she pulled a fast one by deciding to hide for a day. Paul, a retired police officer, called Barb at work to tell her that he hadn’t seen their new kitten all day. “Paul was so funny,” says Barb. “He said it was like I brought home a potato. She just wasn’t being very social that first day.”

Tater turns on the charm 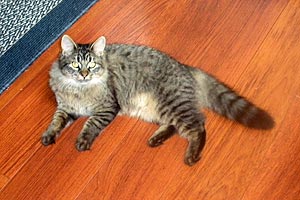 A new day and a new name brought a 180-degree turn in Tater’s demeanor. By the second day, she began seeking out affection, and in less than a week, the selfies started coming from Paul while Barb was at work. “Paul is so enamored with Tater. I receive multiple images per day of them in their favorite pose, Tater on Paul’s shoulder,” says Barb. “She’s so sweet and playful. We just love having her.”

Tater’s also quite the talker. She follows them from room to room, meowing for treats and attention. Because she is curious and likes to sit and look out the large living room window, Paul decided to make some décor adjustments. “I like to decorate and the living room had some plants and a lamp arranged around the window,” says Barb. “When I came home the other day to find all the items cleared from the window and a towel in their place, I asked Paul why everything was changed. He explained he wanted Tater to have a comfy spot to view the world.”

“Tater was one of the first kittens to be adopted through our new foster network,” says Jamie Lyn Rubin, Best Friends–New York manager, who adds that her program has taken in about 70 young felines so far. “We are thrilled that Tater found the perfect family.”

From a kitten fending for herself on the mean streets of New York, to living the pampered life of a cherished family member, Tater’s journey is testament to what people can do when they all work together to Save Them All.

To help more animals like Tater go from homeless to home, become a Best Friends member.