Getting to know puppies 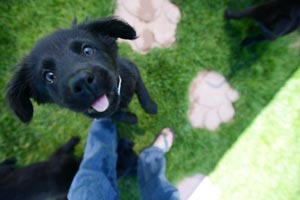 When a litter of puppies arrives at the Sanctuary, Dogtown caregivers name them by using themes. Not only is it cute, but it’s also a good way to distinguish members of one litter from another. That’s how one litter became known as the “Maine puppies.”

Amity, Arundel, Casco, Rumford and Buxton have more in common than being named after cities in Maine, or the fact that they’re siblings. The adorable black Lab and border collie mixes are quite difficult to tell apart. When you have a litter of five carbon-copy pups, it can be hard for potential adopters to see each as an individual. But Dogtown caregivers didn’t want that to happen to the Maine pups. They had already been through enough.

At five weeks old, the three girls and two boys were in a desperate situation. Separated from their mother, they were out in the blazing sun on the side of the road, with no water or shade. Just in the nick of time, a volunteer from a local rescue group saved the puppies. However, because the rescue organization did not have space for the pups, they came to the Sanctuary.

More than the color of their collars

After being checked by the Best Friends veterinary team, they went to live in the puppy area at Dogtown. There, they would get the care and socialization they need to grow into happy, healthy, well-adjusted dogs and find their forever homes. In the beginning, different colored collars provided quick and easy identification. But the pups were more than the color of their collars. Each was an individual with a unique personality.

Caregiver Elizabeth Frank spent a lot of time with the pups and worked hard to get to know who was who. She watched them closely, noting the slightest personality differences in the way they interact with her, their siblings and other pups. It wasn’t long before telling them apart became much easier. 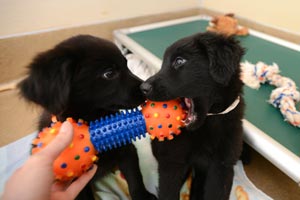 One of the boys, Rumford, can be a bit dramatic. One day while playing in his yard, poor Rumford stepped on a burr, squealed and began to limp. Elizabeth immediately removed the burr and had one of the vets examine his foot. Rumford wasn’t injured but continued to limp around until he forgot about the pinchy thing on the ground.

Rumford’s sister, Arundel, is the smallest pup in the litter, but her assertiveness proves that she’s no runt. The second girl, Amity, is the most inquisitive. She loves to look at and investigate everything in the outside world. Casco, the third girl, and Buxton, the other boy, both have tiny white chin spots. They’re also extremely cuddly and a bit more outgoing than the others.

With personality traits pinned down, caregivers can more effectively help potential adopters choose the perfect pup. But that’s not the only benefit of knowing each littermate so well. “It’s good to know their different personalities, so you can tell when something is wrong,” Elizabeth says.

For example, Amity, the playful adventurer, recently became a little lethargic. “If it was Rumford or Buxton,” Elizabeth explains, “I wouldn’t have been as concerned, as they aren’t quite as active to begin with.” But the decrease in Amity’s activity level was a red flag. She was quickly diagnosed, treated for an upset stomach, and is now back to her bouncy self.

Of course, emphasizing personality differences doesn’t mean playing favorites. Caregivers like Elizabeth make sure that everyone gets equal love, attention and socialization. But again, knowing the quirks of each pup is a big help in making sure everyone gets what they need. And that includes what every pup dreams of — a home.

To help more puppies like these get the royal treatment they deserve, become a Best Friends member.

Note: It should come as no surprise, but all the "Maine" puppies are either adopted or going home soon.