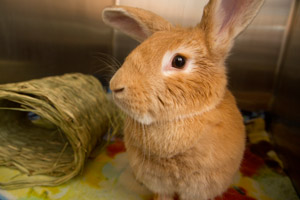 One of the Bunny House's newest additions, Edna, is a stunning palomino rabbit with golden fur similar to that of a palomino horse. But no one would have known this when she was first rescued and brought to the Sanctuary. That's because Edna was found abandoned on the side of the road in a rather sorry state. Her beautiful fur was all covered in urine and feces.

Luckily, animal control in Ivins, Utah, picked her up and brought her to the shelter there. However, the shelter was not equipped to house and care for rabbits. So, even though the Bunny House was already at full capacity, Edna came to live at Best Friends.

Fortunately for Edna, her physical problems were strictly cosmetic. The young rabbit wasn't suffering from any health complications despite the condition of her fur. She wasn't even underweight. After she was cleaned up and spayed, she settled right in at the Bunny House, and began to let her golden personality shine through her initial shyness.

Despite being a little reserved at times, she is getting more and more comfortable with people. In fact, she's friendly enough that volunteers can hold her. And, not only does she seem to enjoy the attention, she's also turning into a regular cuddle bug who relaxes and starts closing her eyes as you pet her. Edna's already won the heart of a little girl from Iowa named Harper, who drew a special picture for her during her visit. 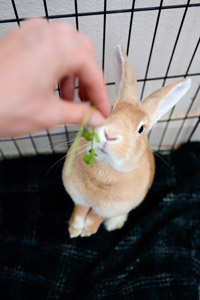 But, as sweet as she is, Edna's still a young girl at just over a year old, and she has a spunky side too. Recently, her caregivers moved her into a large outdoor run, and it was then that they discovered how much she loves to dig. In fact, she's a champion digger, often kicking around so much dirt that piles of it end up in her food dish. She likes to rile up the bunnies in the adjacent run, too, by running around in her enclosure until they start doing the same thing. She gets her exercise that way, and keeps everyone entertained.

Most of all, Edna loves to snack on cilantro; it's her very favorite treat. And she's not alone in her love of the leafy greens. It's a good thing that the Bunny House gets eight cases of the herb every week to keep her and the other bunnies satisfied. It may also help to keep Edna's pretty golden fur healthy and shiny.

Learn more about the adoptable rabbits at the Sanctuary.