Image
Best Friends dog converts German shepherd enthusiast to a fan of the mutt - and adoption.
By  Denise LeBeau 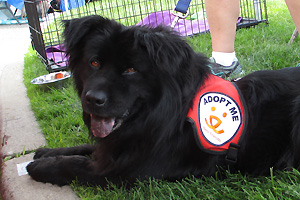 Charlie, a three-year-old black chow mix, is about as loveable as any dog can be, but that couldn’t prevent him from losing his home. That’s how he wound up at Animal Care & Control of New York City. In a city, larger dogs can face a harder time getting adopted, and that includes a big, fluffy mixed-breed dog like Charlie. So Best Friends–New York took Charlie in and placed him in a foster home, where he’d have plenty of time to find just the right family to love. As it turned out, though, it didn’t take long for this looker to turn on the charm and melt his new mom’s heart.

Mary Ann Smith of Long Island, New York, has a penchant for German shepherd dogs, and over the years has gotten her new dogs from breeders she knew and trusted. But in the time since her last shepherd passed away, she decided she wanted to give a homeless dog a second chance. She began checking out German shepherd rescue groups with the hope of finding a dog who’d get along great with her Pomeranian, Sophie, and would readily accept new people. Since Mary Ann is a social person, she wanted a dog who loves meeting new people as much as she does. So when she stopped by a Long Island adoption event that included Best Friends animals and caught a glimpse of Charlie’s big goofy smile, she had to meet him.

Shannon Kirkman, Best Friends–New York’s mobile adoption coordinator, had brought Charlie to the adoption event. “Charlie’s a great dog and I hoped his friendly attitude would help find him a home with a loving suburban family,” says Shannon. “He just deserves the best.”

Even with many dogs vying for attention that day, Charlie’s big smile was a beacon, and Mary Ann saw it at just the right moment. She says that when she went to the event, she was ready to “look with her heart.” While she loves German shepherds, maybe her next dog could be another breed or a combination of breeds. Maybe it could be Charlie.

After she spent a bit of time with him, Mary Ann knew she liked Charlie, but she wasn’t the most important decision-maker. Charlie had to meet Sophie’s standards, too. So Mary Ann went home and picked up her spunky little Pomeranian and brought her to the event to see if she’d like Charlie as a new best friend. Soon the two dogs were strolling along together on a walk — one big fluffy dog and one little fluffy dog, happy as could be. That was enough for Mary Ann to take the plunge and bring Charlie home. 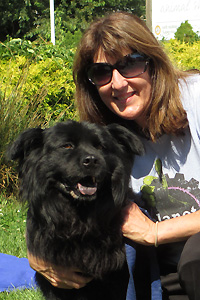 It’s been a few weeks since that fateful day, and Mary Ann couldn’t be happier with her decision. Charlie settled right into a routine in his new home, and has shown how fantastic it can be to adopt a pet who’s already had some life experience. Mary Ann says, “I knew I didn’t have time to train a puppy, and Charlie already knows a lot of commands.” One of their favorite pastimes is playing fetch, and Charlie knows how to sit and wait to fetch the ball until Mary Ann gives the OK.

She’s also happy that Charlie loves meeting new people and accepts Sophie climbing all over him. “He’s perfect for me,” says Mary Ann. And Charlie loves his new family, too. He follows Mary Ann from room to room, and she reports that if she’s in bed, he’s by her side. If she’s in the living room, he’s by her feet. Above all, he’s happy to have found what he lost for a while — a home.

And now, thanks to Charlie, Mary Ann is a fan of adopting pets. “This is my first adoption and it couldn’t have gone better,” says Mary Ann. “Charlie’s such a good dog. I don’t know why anyone would give him up. All he needs is love, and he gives so much back in return.”

Best Friends has been operating in the New York City area for the past five years, hosting large-scale events like super adoption and Strut Your Mutt events on Pier 84 in Manhattan. In addition to holding numerous smaller adoption events, Best Friends provides regular assistance to local groups and rescuers and was one of the lead animal welfare organizations in the effort to rescue animals after Superstorm Sandy.