Help for a three-legged dog 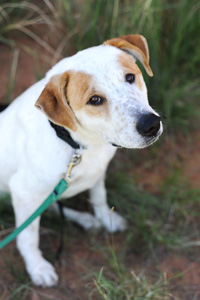 Long Tail has been dealt more than his share of bad luck. But somehow, despite it all, the sweet hound mix always seems to have a smile on his freckled face. He’s a testament to how a good attitude, paired with lots of love and care, can make all the difference in the world for pets in need.

The white dog with copper spots and patches first got into trouble years ago when an accident required that one of his back legs be amputated. After recovering, Long Tail was doing OK for a long time, until this past July when he tangled with a moving car and came away with a broken pelvis. While most animals can get along just fine on three legs, everything can change when a new injury strikes.

When Long Tail arrived at the Sanctuary, he was in terrible pain and couldn’t walk at all. He needed help — fast.

The Best Friends veterinary team got to work easing Long Tail’s pain, but once they got a better look at his injury, they determined that the break was so bad that he would need to see a specialist. Soon, the chipper but pain-wracked dog was on his way to Phoenix for surgery with a specialist who often works with Best Friends’ extra special cases.

Long Tail’s surgery was a success, and as soon as he was stable, he came back to the Sanctuary to begin his long recovery. He would be living at the Best Friends Animal Clinic until he was strong enough to learn to walk again, after which he would move to Dogtown.

Support for a three-legged dog

The going was tough. Long Tail had physical therapy sessions twice a day, but he was reluctant to put any weight on his one back leg. He only wanted to crawl or walk on his front legs, but that put too much stress on his joints and his front legs couldn’t handle the weight for very long. And at Long Tail’s age (eight), he’s likely to start losing some of his mobility anyway. To stay mobile and pain-free during his golden years, he would have to strengthen that back leg and get it moving again.

Again, the Best Friends veterinary team was there for him. They helped Long Tail learn how to walk in a support sling. That way, he could gradually put more and more weight on his leg until he could get going on his own again. The process took about six weeks, but Long Tail didn’t give up. He even learned how to get up from a sitting or lying down position without help. And he was getting a tiny bit better each day. 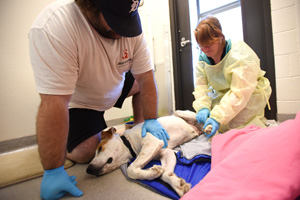 Then in late September, Long Tail was finally strong enough to move up to Dogtown. With the worst of his ordeal behind him, he spends a good part of his days lounging in front of his building, next to some towering sunflower plants. Occasionally he gets up to greet a visitor or a Dogtown tour group, and ask for some back scratches.

Long Tail’s life today doesn’t leave much time for leisure. He still has an intensive physical therapy routine that includes hydrotherapy twice a week, and daily exercises like stair climbing, short walks, leg stretches and “puppy push-ups” (going back and forth from a sit or down position to standing). But it’s worth it, because the more he keeps up with his exercises, the better the rest of his life will be.

While Long Tail will continue hydrotherapy indefinitely and will always need to stay active, he’ll eventually have a more relaxed physical therapy routine that will include trail walks with volunteers and introductions to other dogs. Now, the only thing he still needs is a real home, where he can enjoy life as someone’s much-loved pet.

There’s no doubt in anyone’s mind that Long Tail can get there. After all he’s been through, the sweet senior knows how to get up and keep trucking.

To bring hope and healing to more animals like Long Tail, support our work.