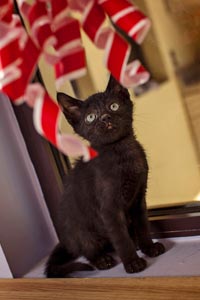 When they first arrived from a Los Angeles city shelter, Yoshi and Yessi appeared to be just like the other kittens around them.  At just three weeks old, the fuzzy black kittens were adorable with their blue-gray eyes and exclamation-point tails.

All pets at the Best Friends Pet Adoption and Spay/Neuter Center in Los Angeles come from Los Angeles city shelters, and neonates (young kittens) make up a large percentage of them. Best Friends focuses on kittens like Yoshi and Yessi because, sadly, they are among the pets most at risk of dying in city shelters, especially during the height of the summer kitten season, when hundreds enter shelters every day.

Yoshi and Yessi were all settled with the others into a suite in the Best Friends kitten nursery. The plan was for the group to be carefully fed and cared for by staff and volunteers until they grew to be two pounds, at which point they could be spayed or neutered and placed for adoption. But things didn’t go according to plan.

A turn for the worse

“The day after Yoshi and Yessi arrived, they were suddenly stiff-legged, with all four limbs straight out to their sides,” says Rita Ball, a manager at the center. The kittens also were diagnosed with lockjaw — their tiny mouths unnaturally clamped shut. At three weeks old even healthy kittens can be fragile, so the turn was cause for alarm. Rita immediately sought help from Dr. Fumie Yamamoto, one of the center’s veterinarians.

Dr. Yamamoto recalls: “When I initially saw them I thought, ‘Ooh, this is bad.’” There were a few possible causes; the most likely was tetanus, but it’s rare for kittens to get tetanus. Though clearly in trouble, Yoshi and Yessi were alert, looking around and still attempting to eat.

“They seemed like they wanted to fight through it,” Dr. Yamamoto says, “so we gave them a chance.” She prescribed antibiotics and regular feeding by syringe, since the kittens couldn’t eat on their own. It would be a lot of work, but if the kittens wanted to live, staff would do their best to help them. Everyone understood that if there were no signs of improvement, the kindest thing would be to let them go. 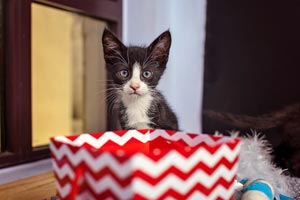 The kittens were set up in Rita’s office where she could monitor them more closely. Volunteers and overnight staff kept up the intensive care, including feeding and giving antibiotics. It was necessary to use small syringes without a needle to carefully feed the lock-jawed kittens.

“They ate really well, just really awkwardly,” Rita explains. “We’d put the syringe in the corner of their mouths and they’d lock onto it.” And Dr. Yamamoto checked them daily. She says, “They could move different parts of their bodies slightly more each day, and since they showed a tiny sign of getting better, we just kept going.”

After a few days, Yessi and Yoshi’s jaws began to relax. They continued to be wobbly for about two and a half weeks, but they were growing and improving a bit each day. Then one day, the kittens buried their noses in wet food — on their own. Soon after that, the wobbliness subsided and today you’d never know the little black kittens had overcome so much in their short lives.

When the pair reached two pounds, Yoshi was neutered and Yessi was spayed. While they were once again just like other healthy kittens, their fighting spirit must have made them stand out to adopters because they both were adopted the very next day.