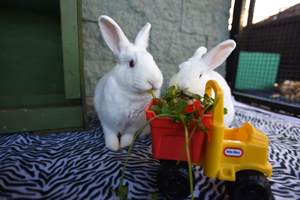 Standing side-by-side, pulling long strands from a bucket of sweet hay and nibbling contentedly, Norah and Ernie look like they’ve been living together all their lives. But the two rabbits didn’t know each other before they came to the Sanctuary. They arrived three months apart, after being saved from similar, terrible fates.

The adorable New Zealand bunnies were both homeless and roaming the streets, exposed to hot weather, traffic and natural predators. Whether they’d escaped or had been abandoned, they were born to be people’s pets and didn’t know how to fend for themselves in the great outdoors. Their chances of survival were slim even if they hadn’t been injured.

In the middle of the summer, Norah was found dragging her back end across a street. The injured rabbit was unable to get out of harm’s way — or out of the heat. She had likely been hit by a car and was terrified. A rescue effort was launched, and soon Norah was on her way to the Sanctuary. Although she was sore after her ordeal, she was a very lucky bunny. She didn't have any broken bones or other serious injuries. After a few days of recuperation in the Best Friends Animal Clinic, she was able to go live at the Bunny House.

At first, Norah was extremely shy and would not leave her hidey-house box until all of her caregivers had left the room. But sometimes it just takes new bunnies time to settle in and figure out that the Bunny House is a great place to be. As soon as she realized she was free to munch on big, leafy greens in complete safety and peace, her fun, friendly personality really came out.

Not long after that, her best-friend-to-be, Ernie, arrived at the Bunny House. Because of their similar backgrounds, staff hoped that the two bunnies might make a good pair, but they couldn’t be introduced right away. Ernie had been through a frightening and painful ordeal himself. He had been attacked by another animal, and had puncture wounds all over his body, including one near his eye. No one knew how he had managed to escape with his life, but he got the medical treatment and TLC he so desperately needed to feel better.

During his recovery, Ernie was bashful, too. He lived in Bunny House manager Jason Dickman’s office, and, as Norah had done at first, tried to hide from people. But gradually, he began to hop out of his hidey-house, especially when Jason offered him bunny cookies or dried banana chips. 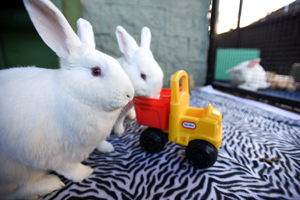 Ernie soon made lots of human friends at the Bunny House, but caregivers knew he’d do even better if he also had another bunny as a pal. Bunnies are very social creatures who enjoy each other’s companionship. They like to groom and watch over each other. But pairing them up can be a bit tricky. Because rabbits are so territorial, they have to go through a bonding phase, which can last anywhere from six days to six weeks. During that time, caregivers have to watch them very carefully whenever they are together, to make sure that they are a good match.

That wasn’t a problem for Ernie and Norah. They took to each other in just over a week. Norah now has a constant companion, and Ernie, who is still a little shy, has a role model when it comes to his relationships with people. These days, they not only get to share their hay, but they are also sharing a bright future and true happiness together.

To bring hope and healing to more animals like Ernie and Norah, become a Best Friends member.