A nose for fun

Tamika, a white Chihuahua with an underbite and pretty brindle patches, is spending some time outside her kennel at the Best Friends Pet Adoption and Spay/Neuter Center in Mission Hills, California. She runs around the room, circling cardboard boxes that have been carefully arranged by animal assessment and transport specialist Lauralea Oliver. There's a piece of cheese inside one of the boxes, and if Tamika can sniff it out, it's hers. With careful guidance - but not too much - from Lauralea, Tamika eventually figures out which box hides the prize. Then she has to work up the courage to reach into the box to claim it, which she does, tail wagging. 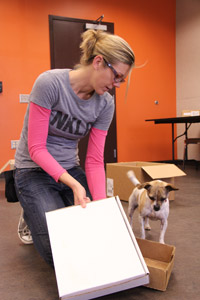 The activity, called nose work, is a competitive dog sport, Lauralea explains. She tried it with her own dog several years ago and got hooked on it when she saw that it was more than just fun - it caused positive changes in her dog. She's now a certified instructor under the National Association of Canine Scent Work, and has brought those skills to the adoption center to help the dogs. She says, "It's a nice way to break up the routine, give the dogs something different to do. Mentally, a shelter environment is boring for dogs - kennels can be monotonous and stressful if there's not enough to do." Even with lots of walks and love from staff and volunteers, dogs do even better if their minds get to work too. That's where nose work comes in.

Lauralea has been teaching volunteers how to do nose work with dogs at the adoption center every Tuesday evening, which is great fun for them and the dogs. Volunteers are assigned dogs and get instruction from Lauralea to ensure they're going about it the right way, and they're encouraged to take their dogs out for a little nose work as often as possible. During classes, dogs are worked individually; the task and the prize are theirs alone. 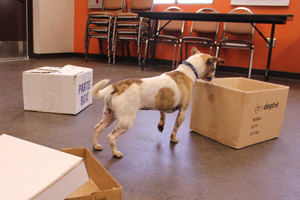 Lauralea explains, "I put out several boxes and only one has food in it. The goal is to keep them stimulated, growing and to keep the search challenging without making it so difficult that they give up." It's a puzzle for dogs to figure out. The puzzles start out easy, which "gives them a nice sense of accomplishment," Lauralea explains. Once they figure out the easy puzzles, she can start to make the food more difficult to find by closing boxes all the way, stacking them or elevating them. "It's a mentally strenuous activity, so they get a lot more out of it on an emotional mental level by using a different part of their brain that they haven't used all day. It relaxes them and builds confidence."

To watch Tamika in action, one might think that the last thing she needs is more confidence. Lauralea says, "She can be a bit snarky. She also thinks she's a Rottweiler." But behind all that bravado, she believes the Chihuahua is most likely nervous, and that's why she sometimes acts out. "I think this could help her be more at ease, build her confidence. She was nervous about the people in the room in the first session, but she's very focused on the game. She's doing really well."

It could be especially helpful for Tamika to have an edge. There are more Chihuahuas in Los Angeles shelters than any other breed except pit bull terriers. The hope is that new skills, confidence and a more relaxed attitude in life will help all the dogs using their noses in class find homes faster. Including Tamika. In the meantime, she'll keep having fun and increasing her skills following her nose.

Interested in volunteering with animals at the Best Friends Pet Adoption and Spay/Neuter Center? Learn more.