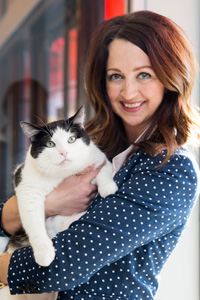 Half cat, half ham but all love

He’s big. He’s cuddly. And clearly he’s so much fun to photograph. They don’t come any cuter than Ben, a black-and-white cat who stayed for a time at the center while mending from an infection on his little chin. But whether he was feeling up or a little down, Ben was always ready to ham it up with friends. His friendly face even provided a source of comfort for one Best Friends staffer who was on her very first day at work.

“For me, one of the most memorable adoptions of 2015 was Ben the cat,” says Sandy Nelson, NKUT manager. “Day one at a new job can be scary. My day one was awesome though, because I immediately saw Ben in our Best Friends cat colony room.”

Before coming to Best Friends, Sandy worked at the local shelter where Ben was staying. So, as Sandy says, “Ben was a familiar face.”

Ben — well, he’s happy to snuggle anywhere with anyone willing to pick him up. Sandy snagged his handsome mug to be with her in her official Best Friends photograph. And 15 days later, Ben said goodbye as he headed off to his forever home. 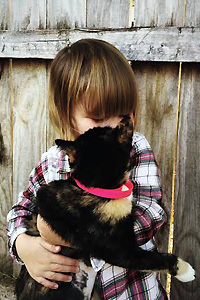 What happens when you introduce a chatty kitten to a three-year-old girl in a half-body cast? You get one of the most touching adoptions from 2015.

"The one that comes to mind for me is Viola, a beautiful and chatty kitten with feline immunodeficiency virus (FIV), who was in our kitten nursery for a long time,” says Lindsay Hooker, volunteer coordinator at the center. But once Viola moved into the main cat area of the center, she didn’t stay there very long.

“My friend Corinne has a three-year-old daughter, Liesl, who has hip dysplasia,” Lindsay says. “Knowing that Liesl would be in a waist-down cast for months with not a lot to do, Corinne wanted to get her a kitty companion.”

So after speaking with her friend about FIV, they decided to meet Viola. It was love at first sight all around.

“I checked in with them a few days after adopting (the day Liesl got back home from surgery) to see how everyone was getting along,” says Lindsay. “I got the following response: 'Viola is the most tolerant cat on earth!  Liesl and Viola have come a long way and I'm so proud of her. Best decision we ever made.'"

Second chances at a loving adoption 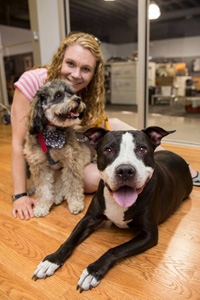 Old friends briefly reunited last year at the center. And they gleefully said goodbye again. That’s because a dog named George, who was familiar to NKUT Coalition manager Tracy Kelley from several years ago, came to the center in hope that Cupid’s arrow would strike for him again.

“I initially fostered George when he was with Salt Lake County Animal Services four years ago,” says Tracy.

At that time, a young couple adopted the pit bull terrier mix as a companion for their first dog, Maylene. But, as sometimes happens in life, things change. The couple separated, and five years later both George and Maylene ended up back in the Salt Lake County Animal Services shelter.

So when they came over to spend the day at the Best Friends Pet Adoption Center, where dogs only come for the day and don’t spend the night, Tracy had mixed emotions. She was sad that things didn’t work out in their first home, but joyful at seeing her old friend again.

“Both dogs became staff favorites here, and again at Salt Lake County Animal Services,” she says. Each dog also became favorites of two visiting families to the center. Within a few days of each other, they were off to their new homes.

“It was wonderful to see my old friend get a second chance at living happily ever after,” Tracy says. “It’s what every pet deserves.” 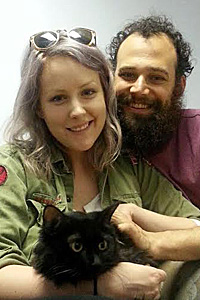 Cute couple Breana and Christian kept a secret from each other. They each came back to the center to hang out with Mrs. Robinson, a sweet little black kitty they had met on a whim. They initially came in together and spotted the sleek cat, who was in quarantine at the time, and asked to meet her. It was instantaneous love.

“We went into one of the meet-and-greet rooms and Mrs. Robinson instantly jumped in the chair next to Christian and curled into him,” says Cathy Overfield, one of the center’s adoption specialists. “She went back and forth, spending time cuddling next to both of them.”

But it was bad timing. Because the couple had been planning a camping trip for a while, Mrs. Robinson couldn’t go. And, try as they might, they couldn’t find anyone to kitty-sit while they were gone.

“Then the next day they delayed their trip and came separately into the center to visit with her,” says Cathy. “They both took pictures and spent about an hour with her, not letting their partner know that they had come in.”

But when they finally came clean with each other, they realized the camping trip just wasn’t meant to be. Adding Mrs. Robinson to the family was.

“Their connection was incredibly strong,” says Cathy, “and they were meant to be a happy family. It was one of my favorite adoptions from last year.”

Roxie runs away with hearts 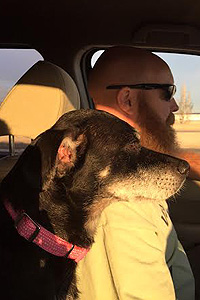 Roxie had been in a home for about six years when she landed in a shelter. Her family said they just didn’t have time for the aging girl.

At least she landed in a shelter that partners with Best Friends to save more lives. So she headed over to spend some time at the Best Friends Pet Adoption Center.

Well, in her brief time there, she really made an impression. When Beth Wolfer, regional gift advisor for Best Friends, was touring the facility with a special visitor who asked about any senior, mellow dogs looking for a home — well, of course, Roxie came to mind.

“Within a few days, Mindie came down with her family to meet Roxie and we were right. It was a perfect match,” says Beth. “Updates have been coming in and we have been told Roxie gets the coveted spot ― sleeping in bed between her two humans and kitty siblings."

Right where she belongs.

That’s the last of our look back at memorable adoptions from 2015. But we’ve already had so many touching adoptions this year, so keep an eye out for all of those stories and more.

Photos by Sarah Ause-Kichas and courtesy of NKUT