Image
“Single” cat learns to accept feline friends as he looks for a new family.
By Christelle L. Del Prete 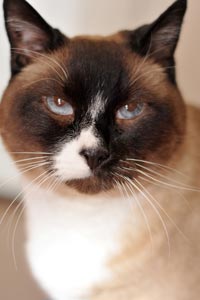 Who says you can't teach an older cat new tricks? Reno, a handsome snowshoe cat, came to the Sanctuary in May after spending most of his life in a quiet household where he didn’t have to share love and affection with other cats. He was the king of his home until he suddenly lost it and, at the age of 15, was forced to make a big lifestyle change.

The community living arrangements in Cat World were a culture shock to Reno. He immediately made it clear to everyone that he was quite dissatisfied with, and inconvenienced by, shared accommodations.

Reno didn’t like other cats, didn’t trust them and would have been happy to never interact with them. It wasn’t bravado or snobbery. His reaction could have been because he was declawed in his youth. With his natural defenses taken away, he was more likely to become stressed around so many unfamiliar felines.

Concerned that the stress would impact his mental and physical health, Cat World caregivers moved him into Sinjin’s. With its couches and kitchen/dining area, it’s the most homelike building in Cat World. It’s also where members of the “Biggest Winners Club” (cats who need to lose a little weight) live. Since there were only five members, there was lots of extra space for Reno to join the club and not feel crowded.

If Reno was going to be comfortable and happy anywhere in Cat World, surely it would be there — or so his caregivers thought. But this discerning older gentleman wasn’t appeased. He wanted to be an only cat again. He had zero interest in the Biggest Winners Club cats and didn’t want to eat his meals around them.

Under protest, Reno spent his first few weeks hiding in the office and eating his meals alone. At night, he slept by himself in the laundry room on a pile of blankets. Whenever other cats tried to greet him, he would hiss and growl.

But isolation wasn’t an acceptable answer. Cat World is a happy place and much of that happiness comes from the positive interactions cats have with both humans and other felines. Caregivers knew they needed to help Reno learn to be more social and to live peacefully with other cats. 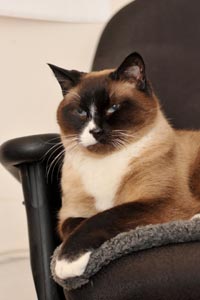 Many cats adapt quite well to major changes in their lives even at an advanced age, and Reno’s caregivers knew he had the potential to do the same. If he kept insisting on being an only cat, they would let him. But at the very least, helping him make friends was worth a try.

Over the next few weeks, they kept encouraging Reno to take his meals in the main room. As long as the other cats kept a respectful distance while he was eating, Reno finally decided that was OK with him. Once he learned to eat around them and realized they were friends and not foes, he wasn’t so quick to hiss and growl at them. He no longer felt the need for a nightly retreat to the laundry room, preferring instead to stretch out on the comfy couches.

Reno may always prefer humans to other cats, but now that he's learned to accept his feline counterparts, he's a much happier boy. And after facing the tough adjustment of losing his home, happiness has been everyone’s hope for Reno. Now, he’s got a lot more of it to look forward to.