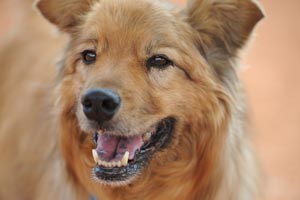 Right now, 14-year-old Rogue is celebrating a huge personal accomplishment and a very promising lifestyle change. And the best part? It’s a success that will improve his chances of finding the perfect home.

Rogue’s victory took lots of hard work and practice with Dogtown caregivers and trainers. But it’s already opening up his world. To understand why, it’s important to know something about the collar system at the Sanctuary — and about Rogue himself.

Every dog at the Sanctuary is evaluated by Dogtown trainers and caregivers, who assess temperament, as well as how the animal responds to a variety of situations, such as handling and meeting new people. Based on this assessment, the dog gets a red, purple or green collar.

Green collar dogs can interact with everyone, purple with staff and volunteers ages 18 and up, and red with staff members only. A red collar doesn’t necessarily mean that a dog is aggressive or has a bite history. A variety of factors are at play. For example, some dogs wear a red collar because they have serious medical issues that make it painful for them to be handled. In such cases, limiting interactions to those experienced with special-needs dogs can help make them more comfortable.

Rogue has difficulty communicating what he is thinking through his body language. Dogtown caregiver Lauren Casterline explains: “It is sometimes hard to read what he is thinking. He doesn't wag his tail that often or get really amped up to see his caregivers.”

There was, however, one clear, consistent sign from Rogue whenever he encountered a stranger. He would run away. In order to earn a purple collar, he would have to learn to be receptive to new people and then pass vigorous testing to prove that he could be handled safely.

But his caregivers believed in him and wanted him to have the best life possible. They knew that having Rogue interact with visitors and volunteers would help this shy, older guy gain confidence and build social skills that would help him get adopted. And, of course, he’d have a better chance of meeting a wonderful person who would fall in love with him and want to take him home. 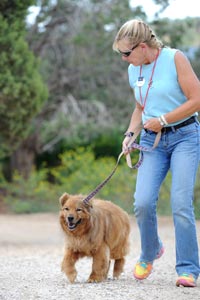 So, as soon as his caregivers sensed a tiny change, such as a more relaxed attitude around new people, an ability to adapt more quickly to new situations or a deeper connection with his caregivers, they decided to go full tilt. In March, Rogue began intensive practice sessions for his test. To pass, he would not only have to resist the urge to run away from people, but also allow himself to be handled without showing uneasiness or fear.

Triumph over his fears

On the day of the assessment, Rogue proved his caregivers right by doing what he’d always found so difficult. He let people approach him, touch his ears and paws and put him through his paces. Then, having triumphed over his fears, he was ceremoniously fitted with his new purple collar.

Rogue is now able to go for walks with volunteers when one of his caregivers is present, and he’s on a training program that someday will enable him to go for unsupervised walks with them. All the work and care has made life bigger and more fun for Rogue, which is exactly what everyone wanted for him.

As for Rogue? “He looks happy,” says Dogtown caregiver Tazmarie Christensen. “And now that he can go on walks with people, we’re hoping he’ll soon find his forever home.”