Saving them all at the holiday pet super adoption 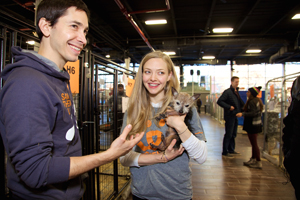 Santa Claus wasn’t the only big-name celebrity who showed up to support Best Friends Animal Society’s holiday pet super-adoption event in Brooklyn, New York, last weekend. The three-day event, held to adopt out hundreds of homeless pets and raise awareness about the great dogs and cats available for adoption in the tri-state area, also drew a few other famous faces.

On Friday, actor Amanda Seyfried, of "Les Miserables" and "Mamma Mia" fame, and actor Justin Long ("Dodgeball," "Going the Distance," "Live Free or Die Hard") stopped by to snuggle with some adoptable pups and to say hello to Santa and a dog named Rice — a brindle-colored pit bull terrier mix who had just found himself a forever family.

On Saturday, Emmy-award winning actress Edie Falco shared a heartwarming moment with a dog named Stella, who had been pulled from Animal Care & Control of New York City by Best Friends–New York. Before finding a home of her very own, Stella stuck her nose out of her kennel to give Edie a big kiss. And Amir Arison, from NBC's "The Blacklist," got the same treatment from Camo and Chase, two adorable kissy-faced pups.

Getting the message out

Their support, in fact, can save countless lives, because it taps into and sends a powerful message to a broad spectrum of people. “We have a lot of pet stores here in New York City,” Jamie says, “and not everyone knows about adopting instead of buying from pet stores.” Celebrity support is crucial to getting that message out to the public.

Jamie says, “There’s an audience out there who may not be tuned into animal welfare, but who may really admire and respect one of these celebrities and take a moment to see what this person has to say — to see him or her sharing this truth out of love and compassion.” And that can translate into a tremendous impact on animals in rescue groups and city shelters.

Doing good for the animals 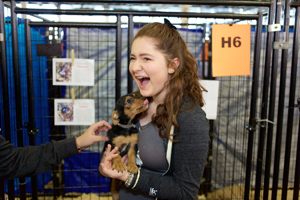 There are lots of causes out there and celebrities are being pulled in many directions, especially around the holidays, so Best Friends truly appreciates their help. Jamie says, “When they take the time to help the animals and to draw attention to the Save Them All mission, it is so important to us — and it says so much about who they are.”

The super adoption not only helped nearly 260 pets find homes, it provided a venue for educating people on the plight of shelter animals and letting them know how many wonderful, amazing pets — of all sizes, shapes, breeds, colors and stripes — are out there waiting for their chance at a loving home.