Senior cat starts over at the Sanctuary 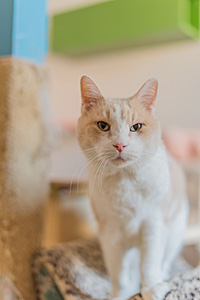 Starting over is never easy. But as Surya (pronounced Sir-ee-ah) has learned, even though starting over later in life can be especially hard, with a lot of love it’s entirely possible.

At nearly 16 years old, Surya is a super senior. He’d been in a home for most of those years and had settled deeply into his comfortable life. But when he lost that home, Surya, who wasn’t expecting such an earth-shattering change, was understandably shaken up.

Because Surya’s chances of finding a new forever home at his age would be pretty slim in a shelter situation, he came to Best Friends. It was a chance for a fresh start, but Surya wasn’t convinced of that fact at first. The handsome cream-colored cat was trying his best to make sense of things, but his first reaction was to feel a bit lost. He would pace around his room and meow pleadingly at his caregivers. Even though he was a bit depressed, he rubbed against his caregivers’ legs and accepted soothing pets from them.

As it turns out, what Surya needed more than anything when he first arrived was reassurance that things were going to be OK. And, since Cat World caregivers gave him plenty of that in the form of extra attention and stroller rides, he began to relax a little. Soon, Surya realized that if starting over was in the cards for an older gentleman like him, Cat World was a pretty great place to do that.

As he began to find his way, Surya became more confident. He learned that people would listen to him if he let them know what he wanted or needed. For example, he began eating much better after he made it clear to his caregivers (through several taste tests) that he prefers fish-flavored food. Once he figured out that people cared about him and wanted to help, he went from mopey and disinterested to a total love bug. 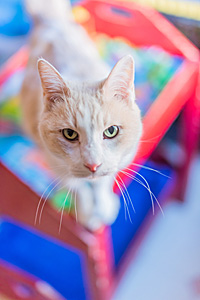 These days, all Surya needs to be perfectly happy is attention from people. His favorite thing to do is to sit on the laps of caregivers and volunteers and give them kisses. He’ll also give hugs by climbing up and wrapping his paws around someone’s shoulders, purring in his or her ear.

Of course, Surya would love to spend the rest of his golden years in a home of his own. But in the months he’s been at the Sanctuary, he’s done something that many people find very hard to do. He’s let go of his old life and embraced the new. And while it wasn’t easy to make such as big life change at his age, he’s made the adjustment like the perfect gentleman he is.

Help more cats like Surya transition to a new life — here’s how: