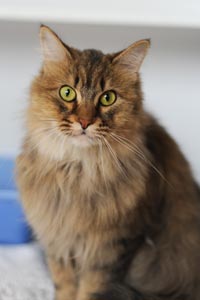 It’s no wonder that people who don’t know Lana tend to focus on her looks. The petite, longhaired tabby could be crowned Miss Universe of cats, but that isn’t what makes her so special.

What’s incredible about Lana is the way she hones in, laser-like, on cat toys. She knows exactly where they are and exactly when to pounce. And she rarely misses. Toys with Mylar in them (think crinkle balls) and other toys that make enticing noises are especially easy targets. But Lana can even slap her paw precisely onto a silent, elusive string.

What’s so special about that, you might be thinking. Any cat can do that. And you are right — if we are talking about cats who can see. Lana, however, is blind. But she’s so precise (almost professional) in her play and she was so good at navigating her room and her outdoor cattery in Cat World that her caregivers swore she can see shapes, or at least shadows. “She got around here like nobody's business,” says one admiringly.

Watch her long enough and you can figure out how Lana “sees.” She uses her ears. Listening intensely, her entire body goes taut and still except for those ears, which twitch at the tiniest sound. It’s almost as if she is gifted with echolocation, as if she were a bat in the body of a fluffy, tabby cat.

Finding things like the litter box, the cat door, cat trees and her food dish is fairly simple for Lana, as it is for many visually impaired cats. All they need is someone willing to make small adjustments at home to accommodate them. For example, litter boxes must be placed in an area where blind cats can easily get to them, furniture shouldn’t be rearranged too often and clutter should be kept out of the cats’ line of travel.

Other than that, there’s little difference between having a sighted cat and one who is blind.  Still, Lana  had not yet found a forever family. She came to the Sanctuary from a shelter that had tried unsuccessfully to find her a suitable home. She’d even been a stray for a short time. 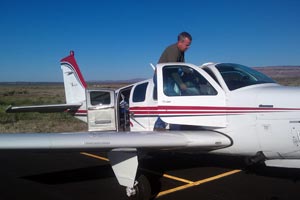 Life on the streets is hard enough for any cat, but being blind made survival extremely difficult for Lana. By the time she arrived at the shelter, she was in desperate need of help.

Lana got the help she needed, but despite being quite young and very friendly, she always was overlooked by potential adopters. At the Sanctuary, however, where special-needs animals rule, someone fell in love with her almost immediately. Finally, a forever home was in sight. All she needed was a lift to San Francisco.

And, boy, did she get one. In perfect timing, a volunteer from Southern California arrived in a private plane and offered to transport some animals on his return trip. The fact that San Francisco was 400 miles out of his way didn’t deter this dedicated volunteer in the least. He considered the detour well worth it to get Lana where she needed to be. And this Miss Universe of cats was more than happy to accept the star treatment and fly to her forever home in style.