Image
An anxious and insecure dog is trained using hand targeting as a way to help him get more comfortable around people. Learn about dog training method.
By Christelle L. Del Prete

Before he came to the Sanctuary, Fred didn’t spend much time around people. He lived on a large property with a bunch of other dogs at a private rescue organization in Arizona. But when the rescue organization lost its land, everyone had to leave, including Fred. So he came to Dogtown, bringing with him some fantastic dog skills, but lacking people skills. And that meant a life filled with people would be stressful for Fred, so caregivers made it their priority to help him.

The problem was that Fred suffered from insecurity and anxiety. He’d get defensive around people he didn’t know because he didn’t trust them to treat him kindly. His thinking seemed to be: “I’d better scare you away before you do something to hurt me.” That made people hesitant to meet him, and it made things like veterinary exams and grooming sessions challenging for both Fred and the person trying to help him. Fred wasn’t trying to be difficult. He just didn’t want people he wasn’t familiar or comfortable with to handle him, because it scared him. 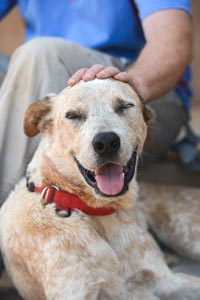 A dog's sweet side

But, deep down, Fred is a very loving, gentle and sensitive dog. He is fully capable of forming strong and trusting relationships with people. It just takes him a little more time than the average dog. And his caregivers wanted to give him the chance to showcase the sweet side of his personality.

Therefore, Fred would have to start thinking about meeting people in a whole new way. Dogtown caregiver Tom Williams began teaching him hand targeting. “We use hand targeting a lot with dogs like Fred who have real insecurity issues around new people,” says Tom. “It gives them a different way to think about meeting people, without resorting to inappropriate behaviors.”

Dog hand targeting training: Touch a hand, get a treat

Here’s how hand targeting works: When a new person walks into Fred’s room, he or she doesn’t try to touch him, make eye contact, make sudden movements or do anything that might make Fred feel insecure or defensive. Instead, the person stands still, extends a hand out to the side and says, “Fred, touch.” Fred then touches the person’s hand and gets a treat.

Fred does this as many times as it takes for him to become comfortable and accept the person. As soon as he does, he loses his wariness and relaxes. And once Fred relaxes, he’s a super loving dog. He’ll walk right up to someone and lean in for affection. “He's able to bond strongly with people, once they are in his inner circle,” Tom says. 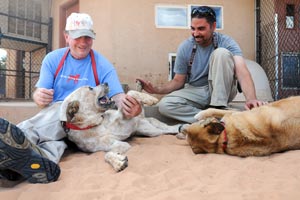 After several months of working together, the bond between Fred and Tom is not only solid, but touching to watch. Fred will follow his caregiver around his yard, stopping to lean in to be petted, and even roll over at his feet for belly rubs. “I can do just about anything to him now,” Tom says, as he scratches Fred’s head and gently strokes his ears.

Though the bond between Tom and Fred is special, it’s also proof of Fred’s ability to bond with other people. He just needed a helping hand to be able to show everyone he could do it.

To bring hope and healing to more animals like Fred, become a Best Friends member.