Image
It is indeed possible to train an adult dog - aka, teach an old dog new tricks. One older Lab became even more adoptable after receiving training.
By Christelle L. Del Prete 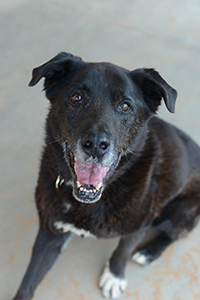 We’ve all heard the old adage: “You can’t teach an old dog new tricks.” But to give Caffrey the best possible chance at finding a new home after he came to Best Friends, the 11-year-old black Lab mix would need to learn a few things. The good news is that over the past few months, Caffrey has been busy busting the old dog training myth.

Caffrey came to the Sanctuary from an animal control agency in Albuquerque, New Mexico. Although his history was unknown, it was clear that no one had ever taken the time to teach him much of anything — not even simple training cues like “sit,” “down” or “stay.” At 11, Caffrey is no spring chicken, and since it can take a bit longer for senior dogs to be adopted, staff at Best Friends needed to give him every advantage in that area. That meant teaching him the basics he should have learned as a puppy, but didn’t.

Luckily, Caffrey’s answer to the question about whether or not you can train an older dog was quite clear: “Yes, absolutely!” Since his arrival at the Sanctuary, he’s been working hard each day with his caregivers and trainers. Since the training he gets is relationship-based, he’s been learning plenty of new tricks through positive reinforcement.

That means that when Caffrey does something his trainers or caregivers ask him to do (like lying down), he gets a tasty treat. Because he loves food, he thinks that’s a pretty great reward. And that makes him eager to repeat the trick, or to move on to the next one.

It didn’t take Caffrey long at all to figure out his training routine. He’s picking up cues faster than some dogs half his age or younger. And he’s proving that in some cases training an adult dog — even training an old dog — can be easier than training a puppy. Since Caffrey started his lessons a few months ago, he’s mastered “sit” and learned “down,” “high five,” “wait” (where he sits and waits patiently for his food), and “go to your place” (where he goes to sit on his bed).

Caffrey’s even gotten the hang of hand targeting (touching his nose to someone’s hand on cue). Hand targeting is a useful tool when working with dogs, because it can be used to teach them lots of other things. And Caffrey’s trainers will keep adding new skills to his resume, until he goes on to a home of his own. 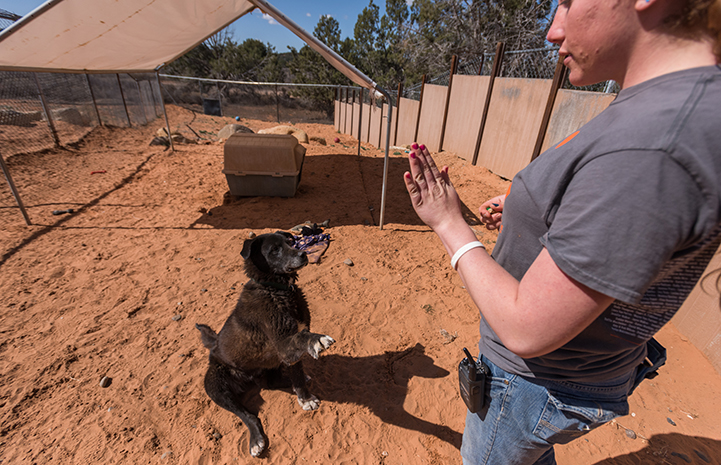 Next up: Loose leash training

The next new challenge Caffrey will take on is loose leash training. This means he’ll learn to walk nicely on his leash, without pulling. That way, he’ll be able to enjoy more walks on the Sanctuary’s trails with Dogtown volunteers, and one day with a new family of his own. He’s also learning a special recall skill so he can meet other dogs appropriately. That’s something he struggled with in the past, because he tends to get too excited when he meets a new dog. Learning the recall means that Caffrey’s caregivers can call him away from his new friends if that happens. And that will open up lots of opportunities for him to take walks with other dogs.

All of Caffrey’s walks and training sessions are helping him keep his mind sharp and gain skills that make him more appealing to potential adopters. And while Caffrey may not be able to run around like he did in his younger days, when it comes to learning, he hasn’t slowed down one little bit.

Help more dogs like Caffrey get royal treatment and training 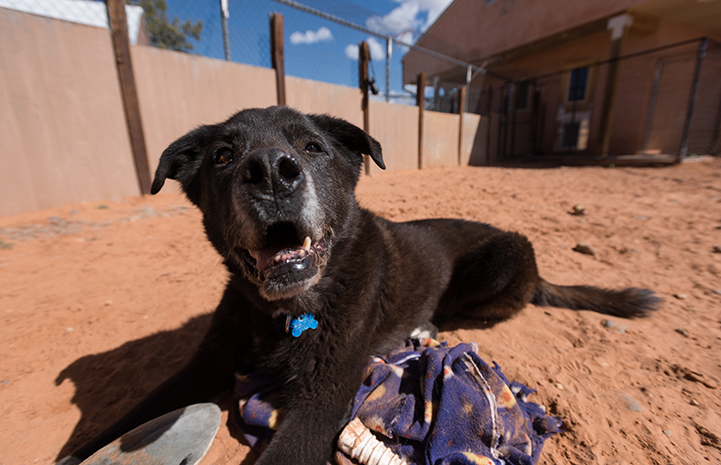