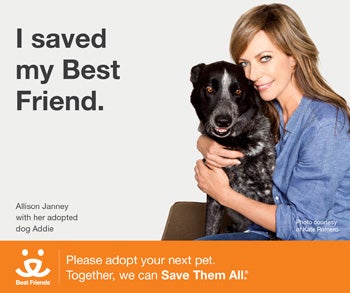 LOS ANGELES -  Seven-time Emmy winner Allison Janney from the CBS sitcom "Mom," is joining with Best Friends Animal Society, the only national animal welfare organization dedicated to ending the killing of dogs and cats in our nation's shelters, to encourage people to become part of the solution.

"The work that Best Friends has done for the far too many animals in need has been nothing short of amazing," Janney said. "Through their strategy, coordination and outreach I believe we will see a day when we can save animals from senseless deaths in overcrowded shelters.  Please remember to adopt, don't shop.  And if you're not able to bring an animal permanently into your home, please consider fostering or volunteering.  Your life will be better for it."

Best Friends Animal Society is the only national animal welfare organization dedicated exclusively to ending the killing of dogs and cats in America's shelters. A leader in the no-kill movement, Best Friends runs the nation's largest no-kill sanctuary for companion animals, adoption centers and spay and neuter facilities in Los Angeles and Salt Lake City as well as lifesaving programs in partnership with more than 1,300 rescue groups and shelters across the country. Since its founding in 1984, Best Friends has helped reduce the number of animals killed in American shelters from 17 million per year to an estimated 4 million. By continuing to build effective initiatives that reduce the number of animals entering shelters and increase the number who find homes, Best Friends and its nationwide network of members and partners are working to Save Them All®.