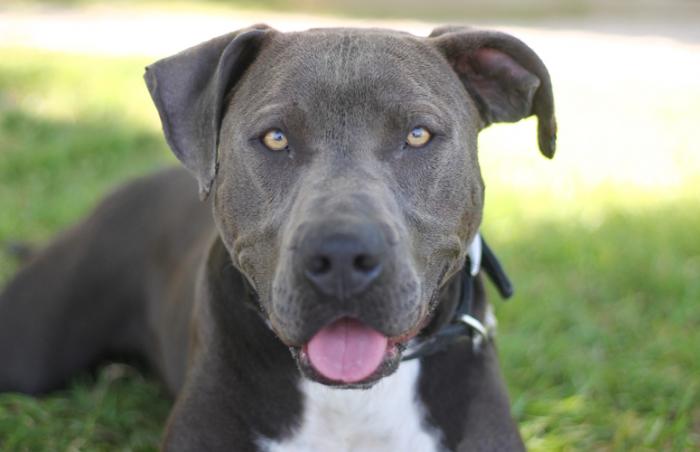 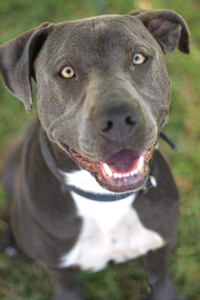 Levi, an exceptionally handsome, steel-grey pit bull terrier, was down on his luck. The five-year-old was transferred from a municipal shelter to PAWS Shelter and Humane Society in Kyle, Texas, in November 2012. Over the next year, he was adopted out twice and returned twice when life threw his new families a curve ball.

All the bouncing around started to affect Levi’s health and behavior. He lost a lot of weight, his coat became dull, and he started acting out with unwanted behavior, including biting his leash when people tried to walk him. For the next 12 months, the staff worked with Levi, made him the king of play groups, and watched him blossom. The only thing missing from Levi’s life was a family of his own. But with the Best Friends holiday adoption promotion, Levi’s holidays went from blue to beautiful.

In part because of dogs like Levi, PAWS is a member of the Best Friends No More Homeless Pets Network, a program that works with rescue organizations and municipal shelters across the country to end the killing of dogs and cats in our nation’s shelters. “The efforts made by the No More Homeless Pets Network are unlike any other in terms of saving homeless pets,” says Heather Dalby, manager at PAWS. “As a small shelter, we recognized that we needed the support of a much larger organization, not only for grant opportunities, but also the knowledge that comes with being a Network partner.” As a partner, PAWS had a plan to find more homes for their pets during the holiday season.

As part of Best Friends’ holiday adoption promotion, running during the month of December, participating Network partners get eye-catching kennel tags, flyers and more, and they agree to offer reduced adoption fees for selected pets.

Last year, PAWS participated for the first time and found homes for 131 pets. It was a big jump from the previous year, when 86 pets went home during the month of December. In addition to their three off-site adoption locations, PAWS installed an adoption trailer to showcase their adoptable cats right outside the shelter. They decorated the trailer and their shelter marquee with balloons to advertise the event and drive more foot traffic in to adopt. “We also posted a lot on Facebook,” Heather says. “Being a Network partner has inspired us to have more of a presence on social media, and it works.”

Rachel Hyde, a No More Homeless Pets Network events specialist, is thrilled with the way Network partners are rocking this year’s promotion. “We have over 220 enthusiastic partners participating this year,” says Rachel. “We should surpass last year’s record of over 3,000 pets in new homes for the holidays.” 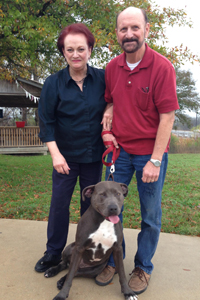 What happened to Levi? On December 4, PAWS received a call: A couple saw the promotion online and hoped to find the dog of their dreams. They had lost their senior pit bull terrier and the gentleman wanted to give his wife the best gift ever — a new canine companion. They raced down to the shelter. Even after hearing about Levi’s history and behavior hiccups, they were unfazed and ready to take him home. “It is such a morale booster for our volunteers and staff to see Levi go home,” says Heather. “Levi’s new parents have already reported how great he’s doing and how much they love him.”

The holiday adoption promotion is geared to helping dogs and cats around the country find their perfect forever families and, like Levi, become their new families’ shining star. That’s thousands of lives saved in time to ring in the new year right.

To help more animals like Levi go from homeless to home, become a Best Friends member.

Find your next best friend at the holiday adoption promotion.