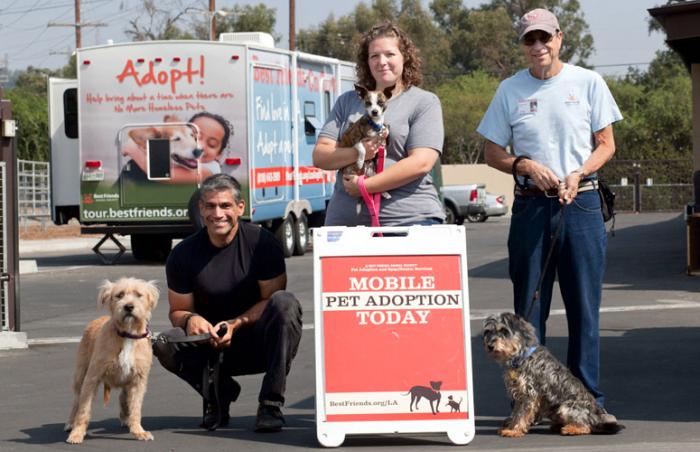 Mobile pet adoption events save hundreds of animals in LA

Reaching a goal of 600 mobile adoptions of animals for the year may sound like an impossible feat for a one-person department — especially considering that the adoption events didn’t get up and running until February, they typically only take place on weekends, and the single staff person who oversees them can only be in one place at a time.

But Jf Pryor, Best Friends – L.A.’s sole mobile adoptions staffer, reports that to date, the program has already found homes for nearly 500 dogs and cats. In other words, the department is set to blow the goal out of the water. How? With a secret weapon — an elite team of mobile adoption volunteers (affectionately called “Mo-Vs”). The secret to the Mo-Vs’ success, Jf says, is unparalleled dedication. With animals dying in Los Angeles shelters every day, that’s exactly what’s needed.

When mobile adoptions began to ramp up in February this year, like many Best Friends’ efforts, volunteers were on hand to help. In the beginning, they were dedicated, but they were few. Jf says, “There was a team of seven people who did every event.” Though the team was accomplishing a lot, there were only so many animals they could find homes for if they could only be at one location. And so Jf worked on carrying out what he had always hoped to do: Divide and conquer. Jf explains, “The natural growth was that Mo-Vs would be trained to run events as team leads” — as in totally on their own. 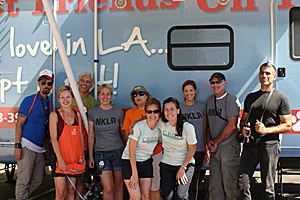 To get people ready to handle an event from beginning to end on their own meant that they would need to know just about everything that Jf knows about the supplies, protocols, animals, adoption counseling, loading and unloading, and a million other details that make a successful event where dogs and cats go home instead of back to the adoption center at the end of the day. Jf describes the preparation for Mo-V to strike off on their own as kind of like boot camp. Instead of arriving at an event and holding a dog, and then heading home when the event is over (which is still an absolutely essential role), people who wanted to do more began shadowing Jf to learn everything they’d need to know about how to run an event themselves.

Jf says, “In the beginning I would match animals with handlers and have a 'sketch' of the day. Now, as we are evolving and as their confidence in this process grows, folks are better equipped to roll with the day, wear many hats and multitask at an enviable level. Now the pros — the team leads and regulars take the new participants under their watch, and the grooming begins, as the cycle repeats.” And it’s working. He adds, “We’ve grown from seven people on heavy rotation to over 50 regulars now.” The team has held over 80 events so far this year. 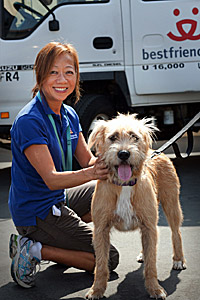 Qualities that Jf finds make an exceptional mobile adoptions volunteer include “commitment, tenacity, energy, humor, compassion, someone that is both people- and animal-friendly, (and) dedication.” The job is open to just about anyone interested in helping out. Jf says, “We find out people’s natural strengths, and we build on those. Everyone has a role, but it’s about everyone pitching in as a collective to have a successful event.”

An obvious question might be why there are people volunteering to do this much work for no pay. They want to help the animals. It’s that simple. Some of the most dedicated, altruistic Mo-Vs have high-profile, often-stressful, well-paying jobs that they work at for over 40 hours a week. But they turn up again and again, putting in full days to run mobile adoption events on the weekend, sometimes even coming in right after their “real” jobs to get things ready for an event the next day.

Jf says, “There’s such a sense of pride when people see an adoption happen. We’ve got the great good fortune that people who adopt our animals are loving, involved animal welfare enthusiasts. When the Mo-Vs see that, it’s palpable, and it’s the thing that keeps them coming back.” It has kept them coming back to the tune of 500 more dogs and cats in loving homes. Jf sums it up by saying, “This program would not be as wildly successful if it weren’t for these brilliant humans. And I mean that.”