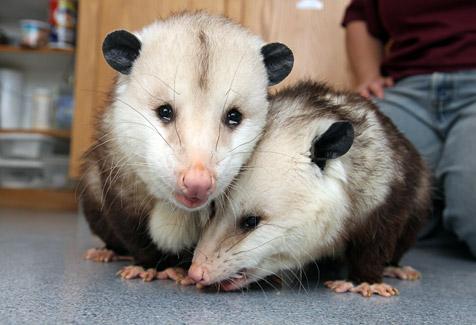 Thanks to a barrage of suggestions from our readers, two opossums recently admitted into Wild Friends, Best Friends’ wildlife education and rehabilitation center, now have names.

The marsupial pair has officially been named Felix and Oscar.

When we first reported on the opossums, we asked readers for some ideas on what to name the two. The response was overwhelming.

Three hundred people responded with 400 great names, such as Hagrid and Dumbledore, Opi-one and Kan-opi, Pericles and Euclid, and Mars and Soupy Al (wonderfully clever for two marsupials). Three people who wrote in—Amanda Kadas, Shari Vazquez, and one anonymous e-mailer—pitched Felix and Oscar.

Staff at Wild Friends chose the names not necessarily because the two remind them of the "The Odd Couple," but because they seemed to best fit the two males.

Personalities of the two male opossums

There are, however, some similarities between the two "The Odd Couple" characters and the two opossums. Like his human counterpart, Felix the marsupial is fastidious. He prefers his mushrooms brown-buttoned, and scoffs if they happen to be white-buttoned. He accepts his food gently, often using his mealtime as an occasion to socialize.

Though Oscar the opossum isn’t as grouchy as Oscar the sportswriter, he is a bit uncouth, and not nearly as finicky as Felix. Oscar will consume just about anything offered him, and takes it with ravenous abandonment. After wolfing down the food from his own bowl, Oscar often raids Felix’s bowl. After he’s eaten, he conks out.

The story of the two marsupials

Felix and Oscar came to Best Friends from the St. George, Utah area, where state wildlife officials found them at a wildlife reserve, having been obviously abandoned by someone who had tried to raise them. They are part of Wild Friends’ education program, which means you can meet the two opossums on a tour of the center, offered daily at 10:15 a.m.