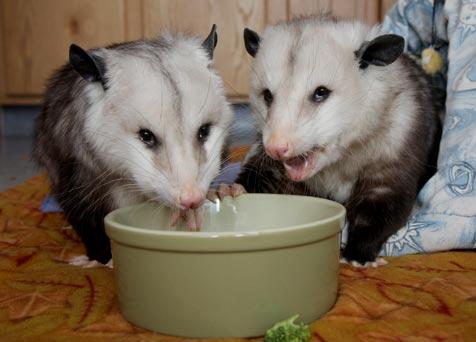 Opossums are friendly, trainable, and related to marsupials (not rats)

As North America’s only native marsupials, opossums have a lot to teach us, which is why Carmen Smith, Best Friends’ licensed wildlife rehabilitator and educator, was happy to accept two male juveniles into Best Friends’ wildlife education program.

The opossums were discovered at a state wildlife reserve near St. George, Utah, about 80 miles west of Best Friends. They were in a cage, indicating that someone had tried raising the pair and then decided to dump them. (Please note: Wild animals are best left in the wild!)

Officials at the reserve tried to place them in a zoo rather than release them back into the wild, since they would have a good deal of trouble surviving without their mother. But no zoos had room, and so the officials turned to Best Friends.

One of the factors that made taking the two a no-brainer for Carmen is that although they are happiest in the wild, opossums like these are highly trainable (they can even be trained to use a litter box). They are also very amenable to being handled and delightfully congenial. Already, they’ve won the hearts of the staff in the Wild Friends office, which is currently their home.

A lot of people think of opossums as pests, and Carmen wants to give visitors a new perspective on these animals. "Opossums are an important ingredient in any ecosystem, and are vital for rodent control," Carmen says.

A common misconception about opossums is that they are related to rats. Not true. As marsupials, they are related to kangaroos, koalas and other animals who raise their young in pouches. And they’re an ancient species, dating back to the time of the dinosaurs. Their hairless, prehensile tails, which they use to grasp objects, is a rather strong reminder of how ancient the species is.

The two opossums are incredibly curious. When they’re not snoozing (which they do quite often), they are scooting behind boxes and desks and crawling on bookshelves and into tight spaces just to have a whiff and a feel. Having been cleared of all parasites, the two are ready to be held and loved on by those who visit Wild Friends, the wildlife rehabilitation and education center at Best Friends Animal Sanctuary.

Plans for their care include building a special indoor enclosure for them with a little door leading outside to a "possumery." Carmen and the rest of the staff at Wild Friends will monitor their diets closely so these rather lethargic creatures don’t overeat and gain too much weight.

Read a story about a great horned owl rescue.