Unable to relax when she arrived at the Sanctuary, Hazel ran in endless circles, but now she's moving forward with the help of a few good friends.
By Sarah Thornton 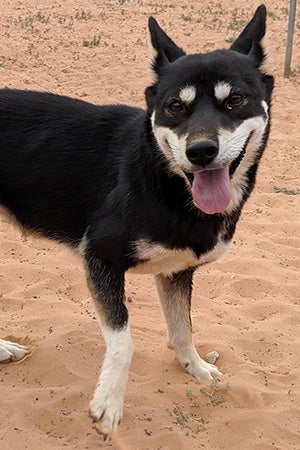 Watching a dog gulp down her meal and then settle down for a nap might not seem noteworthy because, after all, eating and sleeping are some dogs’ favorite activities. But when the dog in question is Hazel, even those small things are big. When the world is a scary place full of stressful things, every bit of progress is a milestone. But recently, more and more often, Hazel is taking those small but big steps.

A scared dog circling her anxiety

Just eight months old when she arrived at Best Friends Animal Sanctuary, Hazel was scared and full of anxiety. She had been in a situation with little to no human interaction and was kept in a small enclosure. Because of that, she hadn’t even really experienced what it meant to be a dog. At first, she spent most of her time running in circles ― small, tight circles and large, open ones ― especially when there were people around.

Her food only disappeared while caregivers were out of sight. She’d also find comfort in playing with her toys when no one was looking and often kept one firmly in her mouth when returning to her circles. Caregivers could tell she had the potential to be a happier, more relaxed dog and they were willing to do whatever it took to help her. But humans made her nervous, so that made it hard for humans to help her. 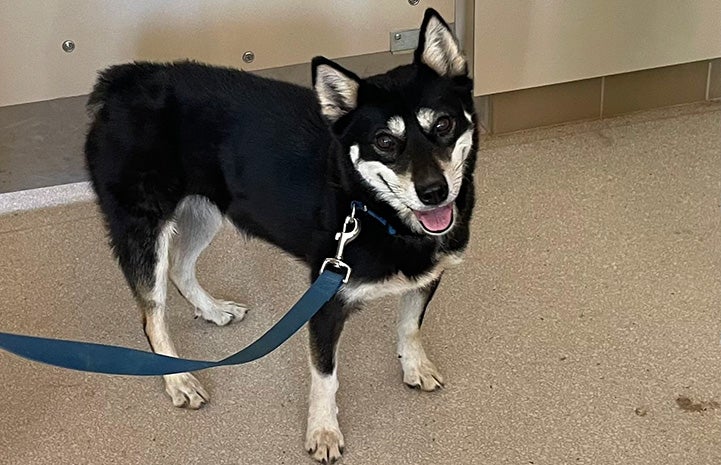 Many times, the best helper for a shy or unsocialized dog is another, much more confident canine companion. So, finding Hazel a roommate and good role model was top priority; however, she was a little picky about her dog friends.

It took a few tries, but eventually the Dogtown staff found two dogs Hazel really clicked with. And once she had a couple of friends to guide her, she slowly started to make progress.

Buddy was her first friend. He was also a little shy at first, but once he warmed up to someone, he was sweet and snuggly. Hazel took to him quickly, and when he moved in to become her roommate, she started taking her cues from him. Caregiver Carissa Hendrick says that one of Hazel’s big steps forward was getting comfortable enough to eat with a human nearby.

Until then, she’d never really eaten in front of people. Her breakfast would sit untouched until she was alone and felt safe enough to eat it. But with Buddy watching her back, she calmed down a little. “I could be in the next room where she could see me and she’d be eating her food. That’s huge,” Carissa says. “She has to be really comfortable to eat. And she had never done that in front of me before.” 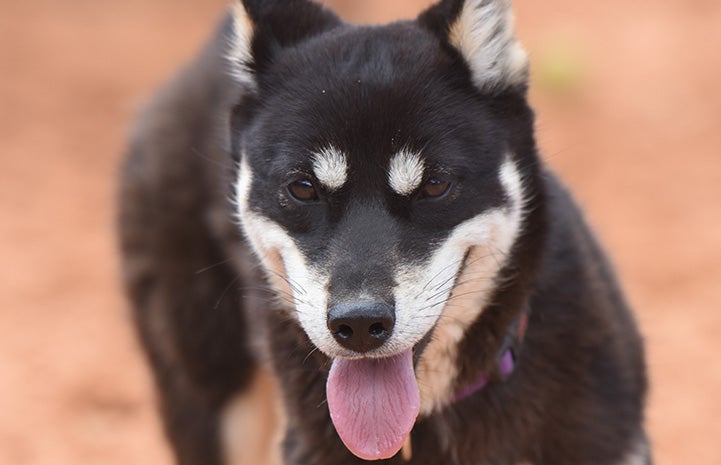 Hazel’s second friend, who showed her the joys of a good nap in front of the TV, was Carissa’s dog, Drake. Carissa sometimes takes Sanctuary dogs on outings to her house to see how they do in a home environment. So, it seemed only natural to do the same with Hazel.

“At first,” says Carissa, “she would just circle around my kitchen table, nonstop. And now when I take her there, she’ll go outside for a walk with Drake, and then she’ll come in and she’ll settle. She’ll fall asleep on the dog bed.”

Hazel doesn’t tolerate any busywork during her visits, though, so instead the three of them settle around the couch and watch Grey’s Anatomy. “I don’t think she cares what we watch,” Carissa says with a laugh. “She listens to it, but you can see her sigh and relax, and then she’ll start falling asleep.”

One particularly impressive moment was when Hazel started dozing off to a nice back massage. For a dog who had never wanted to be close enough to someone to be petted, it was a big deal. Carissa says she and Buddy were sitting together, and when Hazel came up to rest next to them, she took the opportunity to touch her. “She started to enjoy it, that day. I was massaging her back and she started closing her eyes.”

Caregiver Megan Boemeke remembers another milestone that has stuck with them: the day she took a treat from her hand. “It’s huge, the little things,” she says.

When Buddy got adopted, Hazel had to be solo for a while until the staff could find her another friend she approved of. Visits with Drake have continued, of course, and Hazel continues to surprise the people around her as she makes big steps all on her own. 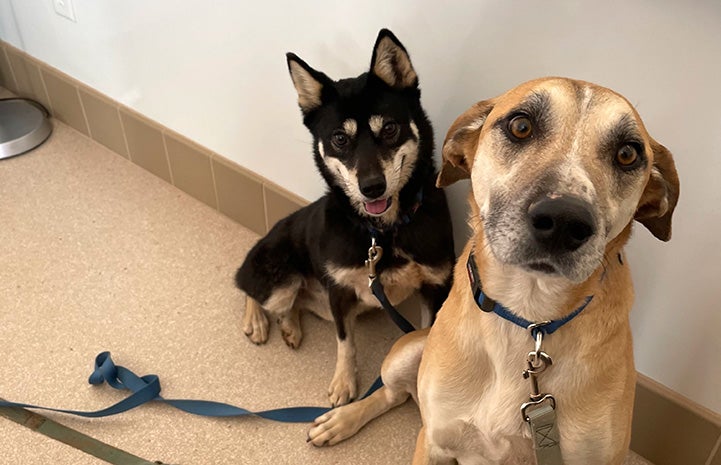 Walking on her own four paws

Hazel was slow to warm up to walking on a leash. In the old days, she needed Buddy or Drake with her or else she would just keep circling. But recently she walked without another dog next to her. “At first she was just spinning around me,” Carissa recalls, “and then Megan joined us walking. That seemed to help. She wanted us in front.” Megan adds, “And she wanted to walk between us. But she stopped spinning, which is huge.”

When Buddy was with her, Hazel would often visit the front desk where volunteers check in. And while he would spend time resting and greeting people, Hazel mostly stayed tucked away in her crate (her safe place). But again, she’s making strides all on her own. On her first solo visit to the front desk, she came out, circled a couple of times and then settled down on a bed.

Hazel may still be extremely shy, but she has come such a long way since she first arrived at the Sanctuary. Everyone who’s met her along the way is rooting for her to have a long, happy life in a home with a sociable, confident dog to be her friend and helper. “She’s one of the most interesting dogs I’ve ever worked with,” Carissa says. “I have so much hope for her.”

Until then, we’ll keep helping her along the path to comfort and cheering her every step of the way. 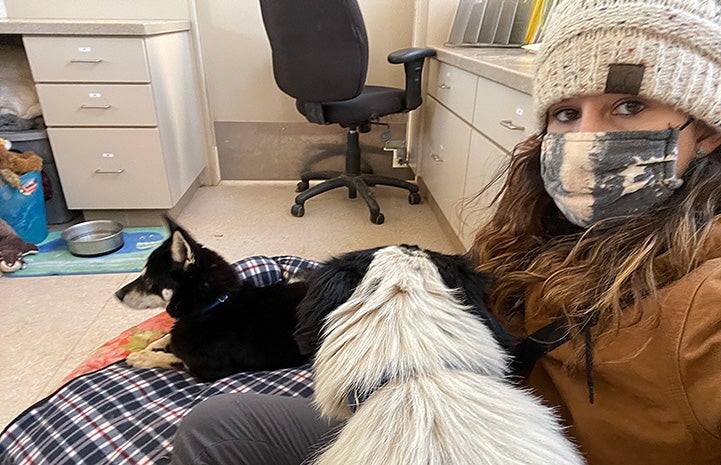 Give a pet the chance to unwind

Spending time in a home can do wonders for pets in need, and it’s so rewarding when you see their progress. Why not give it a try?