Best Friends members Alan Braslow and his wife Elaine have been deeply involved in animal rescue activities in New Jersey for years. And because they’re so familiar with Best Friends’ work, when a new pet store opened in his hometown, Alan had a hunch where those puppies came from — puppy mills.

Some research into the store’s first location confirmed his suspicion and provided momentum for a grassroots effort, spearheaded by Alan and supported by Best Friends and other animal welfare groups. Because of it, Camden County, New Jersey, recently became the state’s first county to pass a resolution banning the retail sale of pets in stores, unless those pets come from local shelters. And that’s a pivotal win for pets in the area.

Protesting the sale of puppies at a pet store

When Alan first began working out how to change things at the new pet store, he contacted Best Friends, which has a national puppy mill initiative program, led by Elizabeth Oreck, who for years has fought puppy mills at the consumer level, Today, more than 75 municipalities around the country have banned the retail sale of milled pets.

Best Friends supplied Alan with educational handouts, posters and “Puppies aren’t products” T-shirts. He also recruited peaceful protestors, without whom, he says, all of this would have been impossible.

“I have a full-time job, a family, and other obligations,” Alan says. “When I couldn’t be at the protest some days, a few volunteers really stepped up and made sure we always had five to 10 people in front of the store.”

While the word “protest” conjures up plenty of contentious images, Alan opted for a more civil approach by distributing educational materials with contact information for 10-15 local animal shelters and rescue groups. He even included his own phone number should anyone need help finding the perfect pet.

“I wanted to be really careful about attacking the problem, not the store,” Alan says, adding that the store owner was a good guy, but was just unaware of the deplorable conditions inside puppy mills.

In addition to having a daily presence on the scene, as well as on Facebook, Alan increased his effort by contacting Jeffrey Nash, a member of the Camden County Board of Freeholders, who also is an adoption advocate. He and his wife have their own cherished adopted dog, Norman.

After compiling extensive research into the issues and examples of legislation passed in other communities, Alan and Jeffrey worked with Best Friends and others to hash out a strategy to persuade the freeholders to pass the resolution. It didn’t take long.

“The research was so thorough, everyone was onboard the day I introduced it,” Jeffrey says. “The resolution unanimously passed 30 days later.” 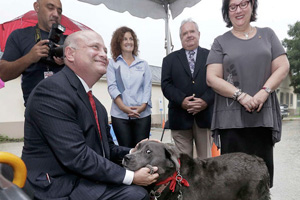 The resolution, called “Norman’s Law” (named after Jeffrey’s dog), prohibits pet stores in Camden County from selling dogs and cats unless they are obtained from animal shelters or rescue organizations. It also gives the Department of Health and Human Services the power to enforce the measure through health inspections. Furthermore, since the 37 municipalities within the county have the power to prevent such a store from opening in the first place, the resolution includes strong support for these communities to pass similar resolutions, a task Best Friends is helping to accomplish.

“It’s already started a chain reaction with other counties expressing interest in passing similar resolutions,” says Elizabeth, who through the years has seen her share of these resolutions take shape.

More than just saying no to retail pet sales, Jeffrey hopes Norman’s Law encourages people to consider adopting from shelters, which are filled with loving, wonderful dogs and cats. “Everyone deserves a Norman,” he says.

Now, thanks to Alan’s unwavering dedication to banning the retail sale of pets (and with continuing help from Best Friends), more dogs like Norman from Camden County will have a better chance at the home they deserve.