Image
Cat hit by car sustains serious injuries, including a broken pelvis, but her story does not end there. Read about her happily-ever-after.
By Christelle L. Del Prete 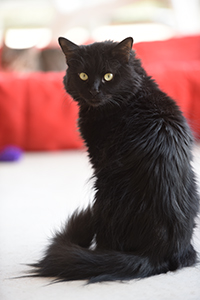 River didn’t get her name from a rushing body of water, but unfortunate circumstances left her quite adrift and far downstream from where she needed to be. The five-year-old cat was hit by a car on River Road, located in a community not far from the Sanctuary. A good Samaritan found the injured cat and called a local rescuer who helped get her to Best Friends. When she arrived, poor River was pretty roughed up.

Help for a cat hit by car with broken pelvis

There was no telling how long River had been on the streets. Her long black fur was dull and matted. The accident had left her hobbling in pain, with a pelvis that was broken in two places. Worst of all, River refused to eat. Although she was lucky in that her broken bones would heal on their own with lots of rest at the Best Friends Animal Clinic, her poor appetite left her with little strength to fuel her recovery.

Since River’s activities had to be restricted and carefully monitored for weeks and possibly months, she went to live in one of the clinic offices. There, clinic staffer Della Wallace made it her mission to get River eating again so she could heal and feel her best. Soon, Della’s office was turned into a food tasting buffet, with tiny platters spread out all over the place.

Although Della and the rest of the Best Friends veterinary team brought the hurt cat a huge assortment of foods and treats, River stayed finicky. She would turn up her nose at countless varieties of canned cat food, as if she had a food aversion. She would nibble one kind of dry food one day, but reject it the next. Chicken and tuna — treats most cats can’t resist — didn’t do the trick either. Even with appetite stimulants, River ate only enough to survive.

By the time River’s broken pelvis finally mended, she should have been strong enough to move out of the clinic and into Cat World. While the accident left her with a permanent limp, she was no longer in pain. But her body was still so thin and frail that vets worried she might re-injure herself simply doing what cats in Cat World do — chasing toys, leaping up onto cat trees, playing with other cats or jumping up into people’s laps. They also worried she would eat even less without someone giving her dedicated “food therapy” (offering her food samples and encouraging her to eat multiple times during the day). 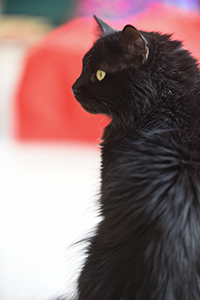 So instead of going to Cat World, River took a detour to a loving foster home. There, she would get constant one-on-one care until she could eat enough to put on weight and build up her strength. Elaine Nelson, River’s foster mom, diligently kept up Della’s efforts to find that magic food that River would always want to eat.

Detour to a loving foster home

It was no easy feat. Aside from Temptations, a popular cat treat, there was really nothing that River loved to eat every day. But Della and Elaine kept at it until they found a few kinds of dry cat food that she liked. Gradually, River began to eat more consistently, to put on some weight and to show her personality. Elaine wasn’t sure if River would like her other cats (she didn’t), but she definitely didn’t expect the “cat loves dog story” between River and her great Pyrenees dog. At only eight pounds, the petite cat happily played with the gentle giant.

Although she’ll always be a somewhat delicate cat, River can hold her own now. And she continues to eat and get stronger every day. After several months in her foster home, she took her next big step and came to Cat World, where she’ll meet lots more people, which will help her find a home of her own. With the worst behind her and a bright future to look forward to, the waters should be calm for River from here on out.

Help bring hope and healing to more animals like River 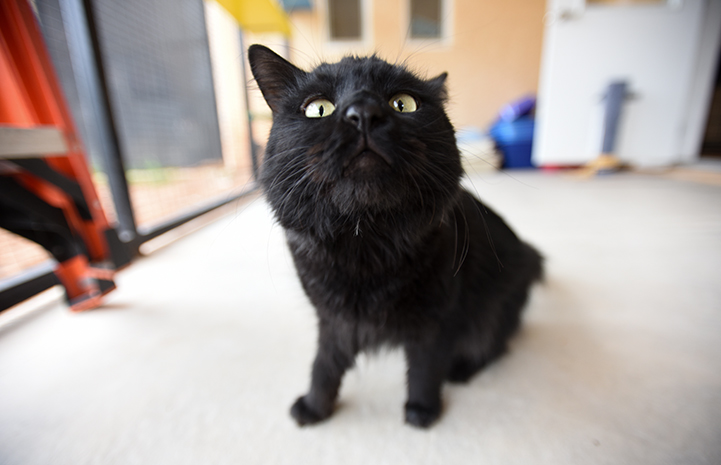