Cat with hyperthyroidism gets all the love he deserves

Palm Springs, California, may sound like a great place to be in the winter, but Felix the cat wasn't exactly basking in the sun. Poor Felix had spent an entire year in an animal shelter, waiting patiently for some loving soul to bring him home. But no one ever did. Perhaps it was because of his age; born in 2002, he's not quite a kitten. Or maybe he was overlooked because he has special needs. Whatever the reason, sweet Felix was brought to Best Friends to get the medical attention he needs - and a much better shot at finding the forever home he deserves. 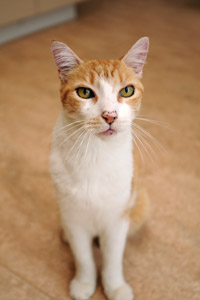 One such illness is kidney disease, from which Felix also suffers. His hyperthyroidism caused high blood pressure, which actually made his kidneys work faster. Once the veterinary staff administered medication to control the thyroid condition, his blood pressure lowered, but that was hard on his kidneys, which had grown used to the extra blood flow. To cap things off, Felix also has an old hip fracture, which makes him gimp a bit when he runs around.

Though the old injury doesn't give him too much trouble, Felix will have to take medication for the rest of his life to keep his thyroid healthy. His kidney levels will also need to be monitored, and he may need a light regimen of subcutaneous fluids. But these ailments don't make him a misfit in Cat World, or anywhere else, for that matter. On the contrary, they are quite common in older cats, and, with proper veterinary supervision, they can be managed in a home setting.

Cat enjoying the affection he deserves 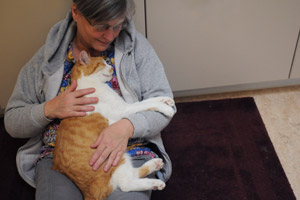 And now, despite an unusually cold January in Southern Utah, Felix is feeling the warmth here at Best Friends. Not only is he being loved and cared for by his dedicated medical team, but also by the rest of the staff at Hope House, the area of Cat World in which he resides. In fact, "when he first showed up, everyone was in his face because he is so cute," Julie explains. And this is just fine with Felix, because he loves people! His favorite activities include snuggling and being surrounded by an "army" of caregivers. He even has his very own chair to sleep in when he gets tired of all the attention.

But Felix is still dreaming of a home of his own, and thanks to Best Friends members, who make all of the special care here at the Sanctuary possible, he now has a very good chance of finding exactly that.

To find out more about Felix, or any of the other wonderful cats at Best Friends, visit Cat World at the Sanctuary or the Adopt a Pet section of our website.