Image
Couple steps up to foster a very shy dog and gets a whole lot of assistance from their live-in dog expert, Dandelion.
By Nicole Hamilton

When Heather and Matthew Rocha look at photos of Bud thriving in his new home, the two foster parents can’t help but to think of how far he’s come — from a dog so fearful he could barely move, to one who eagerly jumps in the car, ready to head out to explore the world with his adopter, Jennifer Cowie.

“Shy is not quite the right word,” says Matthew in describing Bud when he and Heather began fostering him. “Terrified would be a bit more accurate. Bud was so shut down that the only thing he did was to lay pancake-flat on the floor, hide his face in the corner under our kitchen cabinets, and shake.”

Little by little, Matt and Heather helped Bud gain confidence. And while it was hard work at times, they also had 24/7 access to a dog expert named Dandelion, who knows everything about all things canine, because, well, Dandelion is a dog, too. 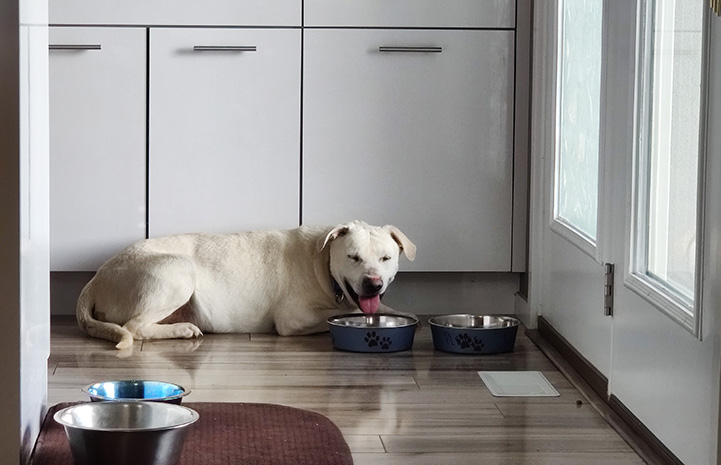 Foster home for a fearful dog

Bud arrived at Best Friends in Utah by way of a shelter in Cedar City, Utah. “When the shelter manager sent over videos of Bud before he entered our program, my heart broke,” says Danielle Barnhart, Best Friends lifesaving outcome coordinator in Salt Lake City. “He was scared and shut down, but you could see he really wanted to trust. When I met him in person after he arrived at Best Friends, he just cowered in the kennel.”

With fear like that, there was no way Bud was ready for adoption. And while a foster home would be the ideal next step for him, the team needed to find a place where he could begin to let his guard down under the guidance of someone with experience helping dogs work through challenges.

Enter Matt and Heather, who started fostering dogs with Best Friends back when the pandemic brought their careers in the entertainment field to a halt. For a good part of the past year, they traded life on the road for one fostering dogs at home in Salt Lake City.

By the time Bud arrived at Best Friends, Matt and Heather had gained plenty of experience helping dogs needing a little extra time, compassion and patience to learn the skills required to thrive in an adoptive home. And when they learned all about Bud, they stepped up to foster him, not knowing that soon after he arrived in their home that their other dog, Dandelion, would step up to help Bud, too. 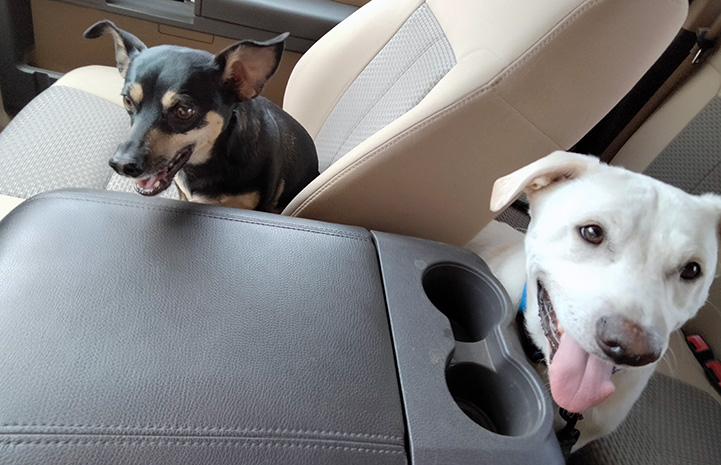 The beginning of a beautiful friendship

Baby steps: That’s what it eventually took to get Bud to go outside on his own. But before any steps could be taken at all, Matt had to first get him up off the floor. On Bud’s first day in his foster home, Matt had to pick him up and take him outside when it was time for him to use the bathroom.

At first, Bud was so afraid that Matt and Heather decided to simply let him be. And though he was unsure of everything human, he would lift his head and appear to relax a little when Dandelion went into his room to check on him.

After a few days, Bud began to venture out of his room. But he was still very afraid of people, and whenever Matt or Heather made an unfamiliar noise or gesture (anything from a sneeze to a door opening), he would run back to his safe place and hide.

“As Bud began to trust us more, we started working with him slowly, showing him that we were not there to harm him,” says Matt, who would sit or lie on the floor with Bud and pet him or offer treats. He and Heather would also pet Dandelion during these sessions, and the more Bud saw Dandelion openly receive affection, the more he learned he could be open to affection, too. 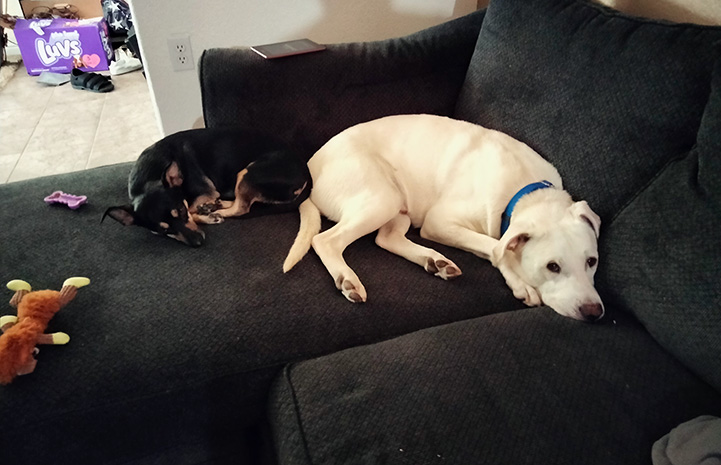 Learning from an expert

Bud was getting a little braver every day, but Matt still had to carry him outside to use the bathroom. And he was still too scared to walk through doorways, hop on the bed or walk up and down stairs. That’s when Dandelion started to play a huge role in helping him become more confident.

“She essentially became his security blanket and an example of what to do,” says Matt. “If Bud was unsure, he would look to Dandelion for the answer. If Dandelion scratched her ear, Bud would scratch his ear. If Dandelion got up to get a drink of water, Bud would have to drink the same water.”

Dandelion played an especially pivotal role in helping Bud master the stairs. One night, Bud watched Dandelion climb the stairs to get to the spot where she often lies for a little alone time or to get some sun. When Dandelion reached the top, Bud began to cry and wouldn’t stop until she came back down. So, Dandelion started to go up and down the stairs as if to say, “Hey Bud, this is how you do it!”

Eventually Bud followed Dandelion’s example, starting with just one step until eventually he was climbing them like a pro. “It was truly remarkable to watch,” says Matt. “Once Bud got it, he was so excited that he could now follow Dandelion anywhere.” 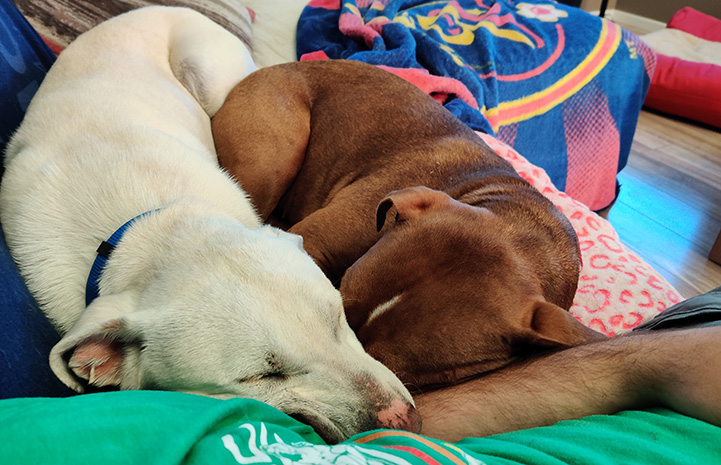 Shy dog is a standout

As Bud was discovering confidence in his foster home, Jennifer Cowie was a few hours away in Vernal, Utah, looking to adopt a dog who would be good company for her two dogs, Rosie and Brandy. When she saw Bud’s photo online and read his story, she knew she had to meet him.

“He just kept pulling on my heart strings,” says Jennifer. “I had been looking for a dog for so long but none stood out to me. But when I saw (Bud), something told me it was meant to be.”

The first time Jennifer saw Bud in real time was on a video call with the Rochas. While she could tell that Bud was very shy, she liked how he looked right at her when she talked. Matt and Heather thought that was a good sign, too, and they discussed getting together so she could meet Bud in person. It was a big step for Bud, but worth it because it was the next step toward his new life. Jennifer decided to adopt him that day. 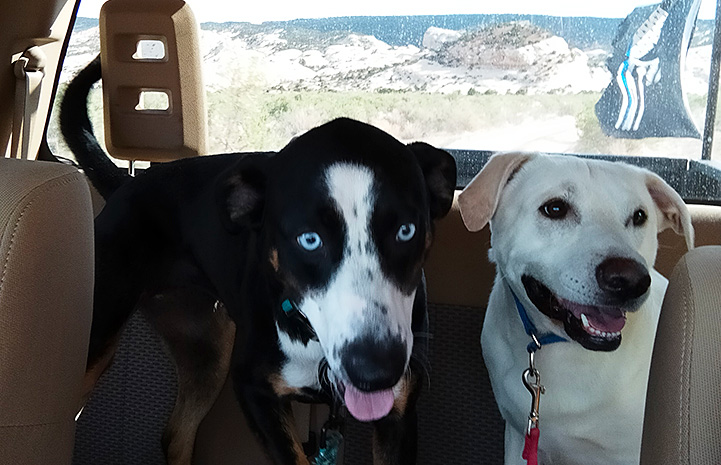 Treats and patience make all the difference

Bud’s transition to his new home went smoothly for a variety of reasons. First, it helps that Jennifer works from home, so she can help Bud whenever he needs it. Having friends Rosie and Brandy by his side makes a big difference, too. But perhaps one of the biggest reasons Bud is thriving today is because he had a foster family who showed him how to trust people. 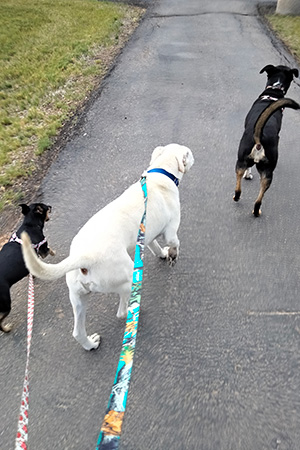 Showing Bud how to trust is an educational process that Jennifer has continued. When Bud first came to live with her, she was dedicated to letting him call the shots, and in very little time he let his guard down. Recently, she has started taking him with her everywhere, so that the world can open up for him even more.

Where Jennifer isn’t close by, Rosie and Brandy step in. Just like his former life with Dandelion, he’s learning again by example. And he’s even warming up to Jennifer’s partner, with one caveat: There has to be treats.

Jennifer often sends Matt and Heather photos and videos of Bud, who has a new name (Cooper) to go along with his newfound confidence. “It’s so rewarding to know he is truly in the perfect home,” Jennifer says. “To see where he is now and know where he came from is truly magical.”

In fact, Matt says that seeing photos of Cooper living his best life almost brings tears to their eyes. But then knowing how far he’s come: How could you not shed a tear or two of joy?

Contact your local animal shelter and sign up to foster. Whether you foster for a day, a week or a month, the results will last a lifetime.