Image
Abby the dog who was rescued from a fighting ring gets a second chance at Best Friends. She receives clicker training and socialization.
By Christelle L. Del Prete

Sweet, loyal Abby almost didn't get a second chance. After being rescued from a horrible life in a dog-fighting ring, she was in danger of being killed because she displayed aggression toward other dogs. Even when she was tested with a stuffed dog, Abby would run at it and wrestle it to the ground. Though she would never actually bite or inflict any physical damage on the test subject, the unusual behavior was enough to put her own life at risk.

But the rescue organization that was working with Abby saw something special in the traumatized dog. Because she is so smart, and so good with people, they knew she could be rehabilitated. She just needed to learn how to trust and how to respond appropriately in new situations before she could successfully transition to life as a family pet. So the organization reached out to Best Friends to help save her. 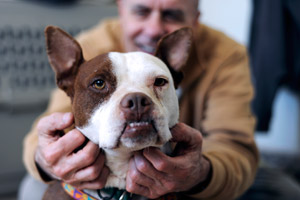 When Abby first arrived at the Sanctuary, she was fearful and painfully shy. But, in addition to her caregivers in Dogtown, Dr. Frank McMillan, director of well-being studies at Best Friends, began working with her. For more than two years, Dr. Frank spent time each day walking Abby and using a reward-based training technique called clicker training to teach her desired behaviors and tricks. Abby quickly became comfortable with a collar and a leash. She learned to sit almost immediately, and to reliably come when called. She was agile, too, and could leap up onto agility equipment or straight up into the air to catch a treat.

But Dr. Frank recalls Abby would also try to outsmart him by devising ways to get a reward without fully following a cue. For example, instead of lying down on the ground, she would lower her front end into a stoop and look expectantly up for a treat. Because Dr. Frank can be a softy, this often worked in Abby's favor; but, if he withheld the treat, she would follow through with what Dr. Frank was asking her to do before claiming her prize. 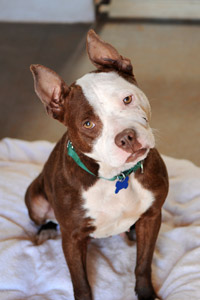 Abby has a "soft" mouth. She would always take her treats very gently from Dr. Frank's hand. But her trainers in Dogtown did extensive work with her using a basket muzzle, so that she could try meeting other dogs safely. Though she did well with some of her canine counterparts, Abby made it clear that humans were her companions of choice and that she would prefer a home where she can be the only dog.

Although she may never have canine friends, Abby is becoming more social and adaptable with each passing day. Staff accountant Martina Schilling has made Abby her official office dog, giving her the chance to get used to "scary" objects, such as printers and oscillating fans, and to get acquainted with office staff and visitors. Abby has also spent a good amount of time in the kitchen at Dogtown's Angel Lodges, where she's become more outgoing as a result of interaction with both staff and volunteers.

Abby's journey isn't over yet; she's still learning, growing and waiting for a forever home with someone who is patient and willing to earn her trust. But the strides she's made since she was rescued have been truly amazing. Martina says once Abby is comfortable with you, she is the most loyal and loving dog you could meet. And her story is truly a testament to the fact that, no matter where they come from, every pet deserves a second chance.

To adopt Abby or another dog, go to the Adopt a Pet section of our website.