Image
Two stray and feral puppies are found roaming around a lake and are brought to Best Friends for help and socializing.
By Christelle L. Del Prete

Feral puppies Rufus and Jacob could have been lost forever. The stray puppies were brothers who had been roaming around a lakeside recreation area not far from the Sanctuary. They were alone, with their mom and siblings nowhere to be found. They were also young — five months old or so. That was bad news, because lack of human contact seriously hurt their chances of becoming happy, well-adjusted pets. But with the right kind of care at the Sanctuary, the two pups could have a much brighter future, if they could only be brave enough to take the first step. 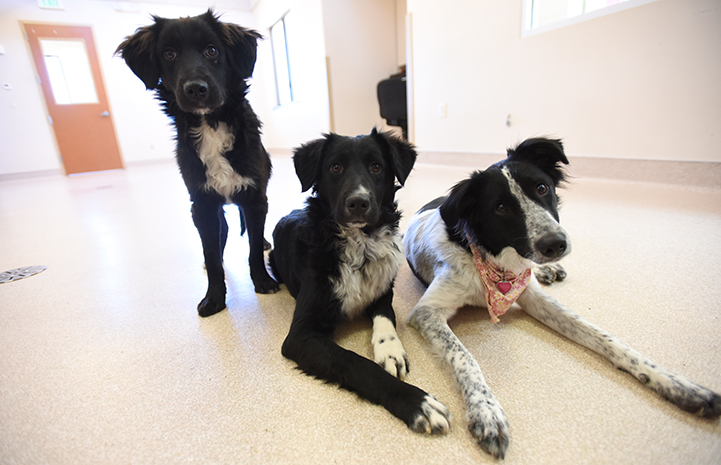 By living on their own during the first several months of their lives, Rufus and Jacob missed a crucial puppy socialization period. From approximately three to 16 weeks old, puppies absorb information like sponges in order to learn how to function in the world. Most important of all, they learn what is safe and what is dangerous. That’s why young puppies at Dogtown get puppy socialization classes, primarily run by Dogtown volunteers.

In the classes, puppies learn that household items like vacuum cleaners and sounds like doorbells or blenders aren’t so scary. “That's part of the reason I was so worried about Rufus and Jacob,” explains Dogtown trainer Ashley Atkinson. “They hadn't had the chance to encounter these things while they were still at an age where general curiosity of the world outweighs fear of new things.” Instead, the pups were far from curious. They were terrified.

It was clear when they were found that Rufus and Jacob had had very few positive encounters with people. They were so afraid to approach anyone that a local marshal had to humanely trap them to bring them to safety. Though Rufus and Jacob no longer had to fend for themselves, there was no way to know if they’d come around, or if they’d be shut down and scared of people for the rest of their lives.

“When we first got them, I was seriously concerned they would never accept human attention,” says Dogtown manager Chris Vergallito. But she and her team of Dogtown caregivers and trainers have plenty of experience helping shy and feral dogs adjust to living with people. They understood that Rufus and Jacob would need tons of time and patience, and they were determined to give the fluffy little border collie mix pups the very best chance to succeed as they grew into adults. 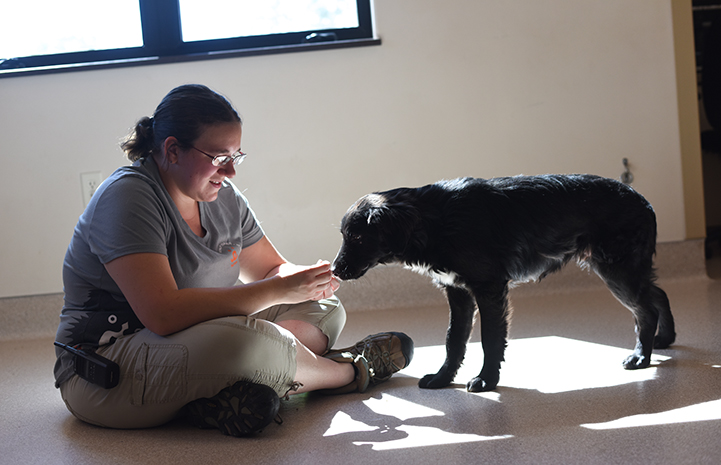 Coming out of the corner

At first, the brothers didn’t want people anywhere near them. They hid in the corner and pressed their handsome faces into it if someone came into their room. It was as if they thought that if they refused to look at people and couldn’t see them, then they might become invisible and the “scary” people would just go away. But shutting people out that way was terribly stressful for them.

Dogtown caregivers worked double time to get the pups used to having humans around. They sat quietly in their room, read to them and tossed treats to them. In the beginning neither puppy would touch any of the treats — no matter how tasty they were — until the person had left the room. But gradually, the temptation became too much, especially for Rufus, who loves treats and is a little braver than his brother. He crawled cautiously out of the corner to taste the treats and realized that, even if someone was there while he was eating, he was safe. Eventually, Jacob, who follows Rufus’ lead, got brave enough to do the same.

Baby steps like these have helped the brothers gradually begin to let go of their fears in the two months they have been at the Sanctuary. Besides treats, other dogs have greatly helped bring Rufus and Jacob out of their shells. They’ve been able to participate in puppy play groups with other dogs who are more social with people so that they can learn from them.

One of their helper dogs is Luella. A Best Friends alum herself, Luella got plenty of socialization as a puppy, so she’s healthy, happy and friendly. Even in a room with three people (two of them strangers), Rufus and Jacob watch Luella interact with people and take cues from her. When she trots up for a treat, they do the same — with Rufus in the lead and Jacob a few steps behind.

Compared to Luella, who grew up with humans helping and loving her, Rufus and Jacob seem very shy indeed. But as Ashley points out, they have come so far from the terrified feral pups they once were.

A safe place to learn and grow

Now seven months old, the puppies take treats from their caregivers’ hands and accept chin scratches. When their caregivers take them for walks, they walk to the trailhead instead of having to be carried. Even Jacob, the shyer of the two, was able to go on his first car ride and to enjoy an outing to a grassy cove at the Sanctuary.

After their bleak start in life struggling to survive on their own in the woods, Rufus and Jacob are just beginning to understand how much joy people can bring to their lives. 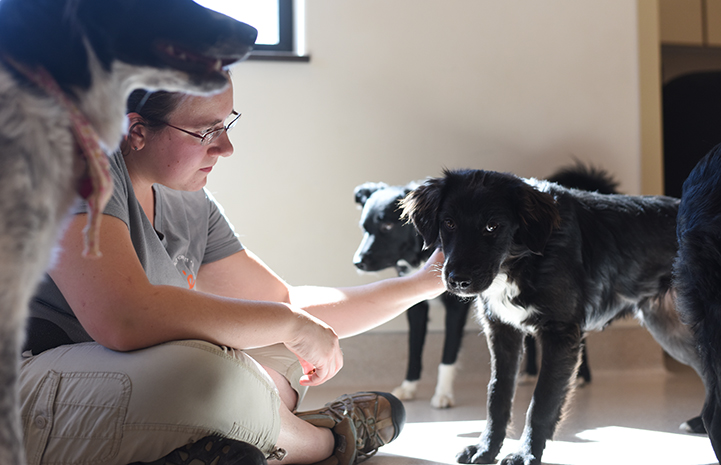