Agility training for dogs isn’t just for recreation. It helps dogs at Best Friends Animal Sanctuary stay happy and healthy, and it can even help them get adopted. Dogs love learning and practicing on the dog agility course in Tara’s run — Dogtown’s indoor training facility. Not every dog coming to the Sanctuary will be an agility star. But because there are so many benefits of agility training for dogs, it’s an important part of life at Dogtown. And best of all, they have a blast doing it.

The goal isn’t to train canines for dog agility competitions, but to give them a safe and constructive way to have fun, burn off some energy and develop important life skills. Agility can help dogs overcome a myriad of challenges. Three dogs named Cordelia, Belle and Isabel are having a great time doing agility at Best Friends, while learning skills that help them become their best selves.

Introducing a shy dog to the agility course

Cordelia approaches the agility course the way she approaches life — cautiously testing the waters to make sure it’s safe to move forward. She needs plenty of encouragement (treats and praise) along the way. But the fact that she is willing to step onto the course at all shows what amazing progress this shy girl has made since coming to the Sanctuary.

Cordelia came from a Best Friends Network partner shelter in New Mexico, where she had struggled to walk on a leash because she was so shy. At Dogtown, she has learned to trust her caregivers, though she’s no lap dog and may never be. That’s OK, because she’s just beginning to enjoy small gestures of affection and to show affection in return.

How to help shy dogs

Since agility training is a great way to help a dog build confidence, it wasn’t long before Cordelia was introduced to the agility course. For the first few sessions, she was accompanied by her confident roommate, Chaplin. Oftentimes, a confident dog is the first to try out the agility equipment, and the shyer dog follow. But Chaplin wasn’t interested in any of the obstacles, such as the dog agility tunnel, platform, A-frame, bar or tunnel. Cordelia, on the other hand, seemed curious.

Rebecca Woodruff, a behavior consultant at Dogtown, helped Cordelia get started. “With shy dogs, one of strategies is to put treats up on the platform or A-frame,” she says. “If the dog is too shy to take treats from someone’s hand, we can place the treats right on the equipment instead. You don't ever have to touch a dog in order to teach them how to run the agility course, which is so important for shy dogs who don't want to be handled.” 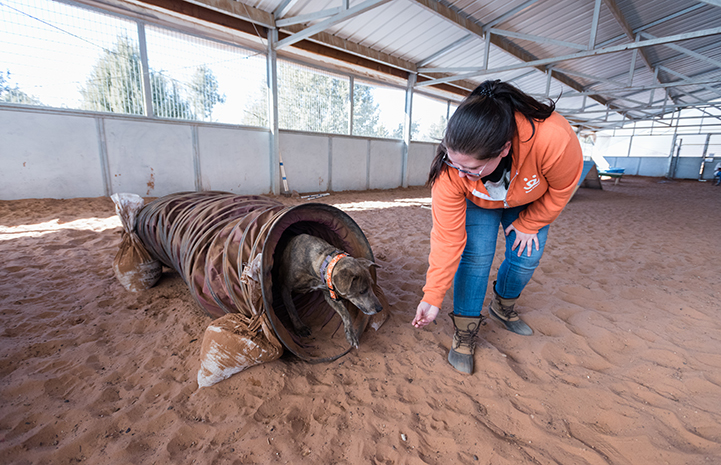 Now that Cordelia feels comfortable on the agility course, she no longer needs Chaplin by her side there, and she’ll take treats from people’s hands. She’s tried almost all the obstacles, including the narrow, elevated ramp called the dog walk.

Rebecca says agility is helpful for dogs like Cordelia. “Not only is (the agility course) a safe and predictable environment for them, but running on the obstacles is also reinforcing in and of itself, because it’s fun.”

Now, when Cordelia gets to Tara’s run and sees someone pull out the treats, she’s ready to go. Her new skills have made a difference, not only on the agility course, but also in other areas of life.

“She doesn’t want to be reached for, but she wants to engage with people,” Rebecca says. “She will rub her head against yours and nuzzle your ears. She is affectionate in her own way. The relationships and confidence she builds here are important, because she carries them from out into the world.” 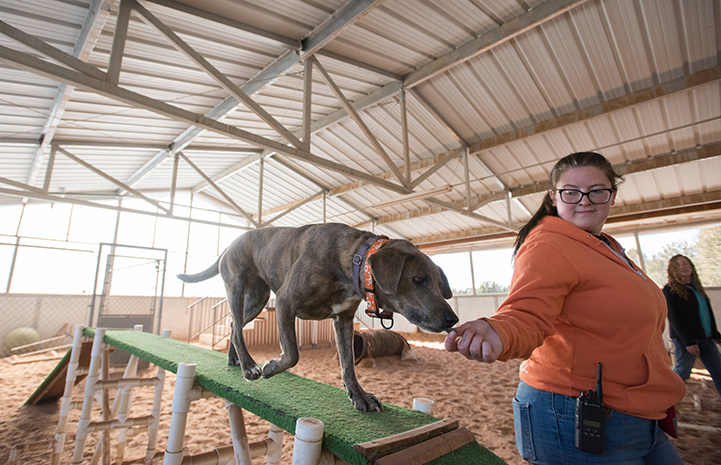 Relationship-building for a defensive dog

Relationship-building is especially important for a dog named Belle, who was brought to Best Friends from a shelter in L.A. because she needed help with some challenging behaviors.

Like Cordelia, Belle is not comfortable being approached by people. But unlike Cordelia, who avoids people when she’s feeling uncomfortable, Belle feels like she has to defend herself. She was so standoffish that it took more than six months of training and trust-building before Terran Tull, a Best Friends behavior consultant, could touch her. But agility has made a huge difference in how Belle relates to people.

“Normally it takes over a month for Belle to accept new people,” says Terran. “They must first interact with her through her gate and then take her for walks. But if she meets someone while she’s doing agility, things go much faster.”

Things went amazingly well the first time Belle met Rebecca in Tara’s run. Right away, Belle was able to run through some of the agility obstacles with her friend. As Belle ran up and down the A-frame, leaped over the bar, dashed through the tunnel and jumped through the hoop, she did several weeks’ worth of relationship-building in mere seconds.

Terran says agility fast-tracks Belle’s friendships because she loves agility and has so much fun doing it. “She really likes it here because she’s in her element, doing what she enjoys. Agility is a good, hands-off way to communicate with her. It’s like saying ‘Hey, we can play the same game.’” 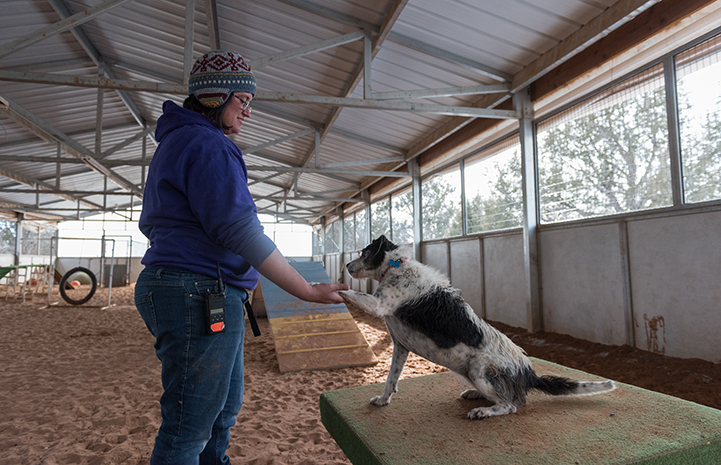 How agility helps with dog anxiety

Watching Isabel on the agility course is very different from watching Belle or Cordelia. Isabel is a streak of concentrated energy — lightning fast and focused. Agility seems to have come naturally to her, as if she was built for it. It’s hard to believe she only started practicing a few months ago at the Sanctuary.

Isabel’s reasons for stepping out onto the agility course were completely different. She’s not shy or defensive with people, but she is an active and energetic dog with a high level of anxiety. She thrives when she has a good outlet for her excess energy, but when she doesn’t, she struggles with compulsions (like barking and jumping).

Last summer, Isabel needed some downtime to recover from knee surgery. Although the rest period helped her heal, the restriction on her physical activity intensified her anxiety. She began reacting to exciting things in her environment, such as the deer and ravens living nearby. Agitated, she would bark and try to chase them. When she was able to walk again on the Dogtown trails, she would get overly excited and chew on her harness.

Anxiety medication helped Isabel cope, but caregivers knew there was a better long-term solution. As soon as she finished her physical therapy and was medically cleared for regular physical activity, they took her to the agility course. 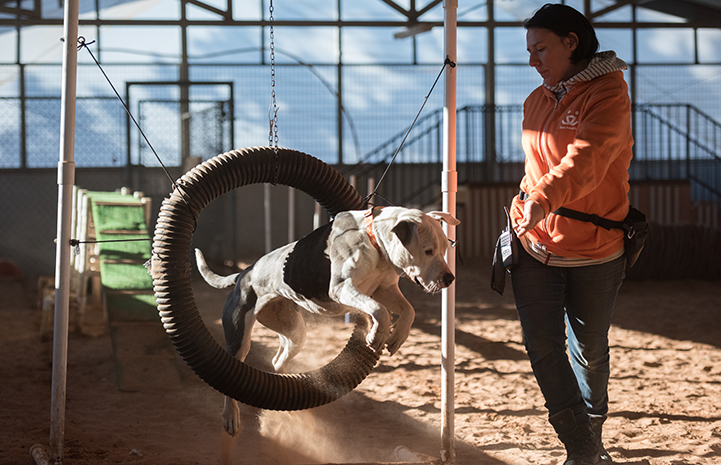 A natural knack for agility

She was a natural, according to Dogtown caregiver Debbi Carman. “She is so smart and motivated that in one session she mastered the platform table, A-frame, bar and tunnel sequence,” says Debbi. “Afterwards, she settled on a large blanket in her room — at rest and calm. She loves training, and it is so good for her mentally and physically.”

During a recent agility session, Isabel was eager and happy to show off her skills. She ran up and down the A-frame, sailed over the bar, whipped through the tunnel, pranced over the dog walk and then leaped through the hoop. With the help of her caregiver, Debbi, and a treat, she also successfully moved through the weave poles, and then raced back to the beginning of the course to do it all again.

“Agility really helps her to focus her energy and use it constructively,” Debbi says. 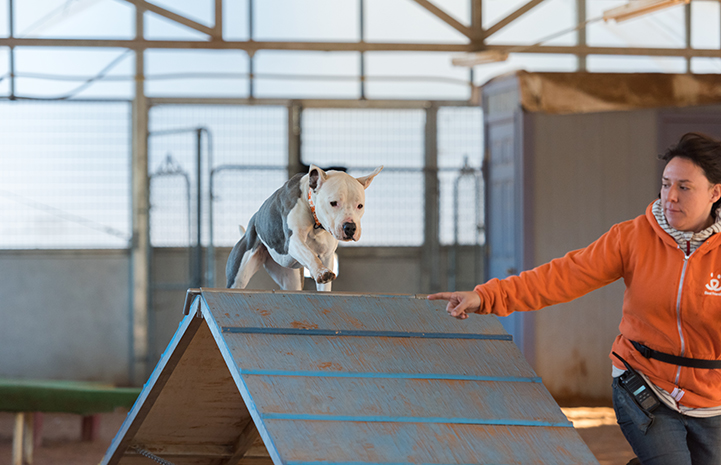 The true beauty of agility is that dogs don’t have to be naturals like Isabel to its benefits. Agility training can be adapted for dogs of any size and shape, as well as for different levels of ability. Dogtown’s agility stars have included a stocky pit-bull-terrier-type dog named Moose, a young Yorkie mix named Milky Way, a Chihuahua mix named Jazz and a Lab mix named Sosa.

Like Cordelia, Belle and Isabel, agility has helped each of these rescued dogs with their individual challenges. Agility training helped jumpy and mouthy Moose gain control over his impulses and learn to calm down. Milky Way was making up for time lost to some health issues early in his life. Once healthy again, he just wanted to be active and have some fun. Jazz was recovering from a rough past and needed to build confidence to overcome her fear of the world. Sosa struggled with leash reactivity and barrier reactivity. Agility helped to tire him out and relieve his frustration, so that he could remain calm while on a leash or inside his yard.

No matter what a dog’s challenges are, mastering agility obstacles is empowering. And an empowered dog can cope much more successfully with the world and all its challenges. But if the dogs could tell us their favorite thing about agility, it would probably boil down to just one thing — fun.

You can help dogs by donating to Best Friends 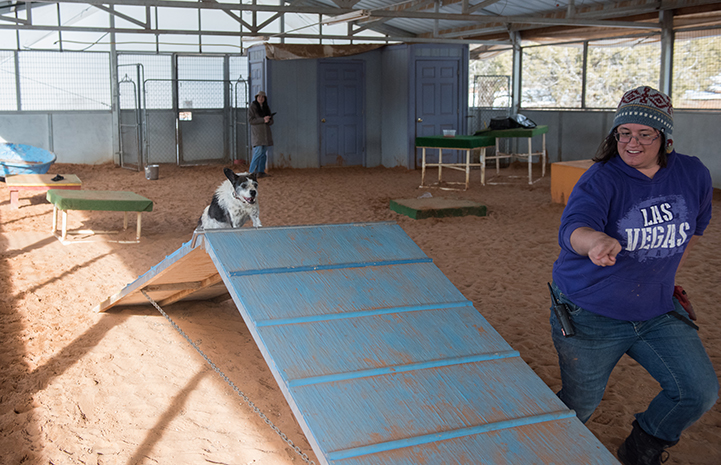