Image
Discarded Jack Russell terrier ends up in NYC animal shelter. With help of Instagram puppy mill celebrity Toast, she is adopted into home in Canada.
By  Denise LeBeau 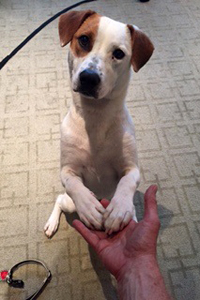 The shelter is no place for a spunky Jack Russell terrier, but that’s where Beatrice ended up after she lost her home in New York. When she got kennel cough and her overall health began to fail, Animal Care & Control of New York City put out an appeal to help get her to safety. Best Friends–New York staff, seeing that Beatrice needed a nurturing environment, jumped into action to find a foster home for her, and then work on finding her a forever home — one that would be a far cry from her humble beginnings.

Once Beatrice left the shelter, Ania Goldberg, marketing specialist for Best Friends, opened her heart and home to foster the little tan-and-white dog. “When I found out Beatrice needed a foster home, I had to help,” says Ania. “She’s too cute to resist.”

Within a couple hours of her arrival, Beatrice was sprawled on Ania’s husband’s lap, licking his face. “Beatrice is so smart, she picked up on the schedule and habits of our home almost immediately,” says Ania.

With lots of love and care, Beatrice was soon healthy and ready for her own forever family. So, staff began spreading the word about her online, which resulted in a bit of serendipity coming into play and helping Beatrice find the perfect home.

Best Friends has quite a few unique supporters who help spread the word about adoption, including social media sensation Toast, a dog rescued from a puppy mill. A post about Beatrice appeared on the Toast Meets World Instagram account, with the hope of attracting an adopter. Within days, Beatrice’s irresistible face caught the eye of a Jack Russell enthusiast.

When Michael saw Beatrice’s photo on Instagram, nothing could stop him from meeting her — not even the fact that she was in New York and he was in Toronto, Canada. “I decided to fly down and check her out,” says Michael. “I had a Jack Russell for many years and missed having one.” At their meet-and-greet, Beatrice was her happy-go-lucky self, and soon Michael had himself a new dog. Beatrice was by Michael’s side on the flight home, but that was just the beginning.

A new home for a great little dog 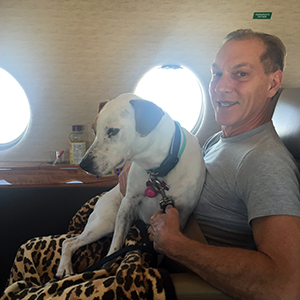 Beatrice is no shrinking violet. At just about a year old, she’s got quite a bit of puppy energy, and once safely ensconced in her new home, she let her ears down. “She started eating everything,” says Michael. But with a lot of patience and love, he was able to get her through that phase.

Michael reports that Beatrice is as smart as she is adorable. The pretty little girl has mastered all the important cues, like sit, stay and down, and she’s a champ at giving her paw. Michael couldn’t be happier that he hopped on a plane to New York to meet Beatrice. “I’m so glad I rescued her,” he says. “She is the best girl. All she needed was a good home and loads of attention.”

The little dog has come a long way from the time she was cast aside. And now that her manners and health are in top-notch form, she’s ready to take to the skies again. “It’s important that she be well behaved,” says Michael. “I travel a lot and Beatrice will be going everywhere with me.”

Photos by Kristan McCormick and Michael