Lab rescued from shelter giving back as firehouse dog

Labrador rescued from a shelter becomes a firehouse dog (aka ‘fire dog') for the Toledo Fire &amp;amp; Rescue Department. Read his story.
By Laura Coffey 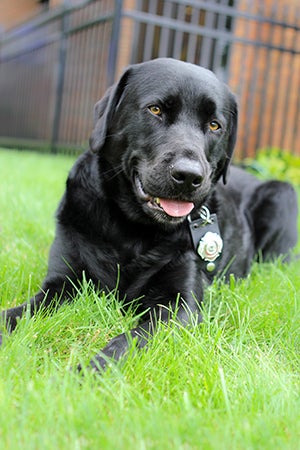 For decades, dogs were regular fixtures at fire stations and on fire engines. The iconic image of a Dalmatian as a “fire dog” still endures for that reason. Dalmatians made excellent crew members back in the days of horse-drawn steam fire engines because they tended to have a calming effect on horses in stressful situations.

But these days, the presence of dogs at fire stations has waned. Municipal lawyers worry about a child being bitten by a dog during a school tour of a fire station, and some firefighters, who just plain don’t like dogs, balk at the idea of them being there.

Nevertheless, Marie Peck, founder of the Fetch Foundation in Arizona, has a dream. Marie’s son, brother and sister-in-law are all firefighters and she says: “If only I could start a nationwide firehouse dog program. We need to get dogs back into fire stations.

“These first responders are going out there every day and seeing car wrecks, injured people, injured pets, so many things — and they’re just supposed to handle it and keep working. They need to know that the right dog is waiting for them, tail wagging, ready to help them let some of that stress go.”

Marie’s dream doesn’t stop there, however. She says, “I have a search and rescue background, and I watch dogs being bred and bought for these jobs. But I say, ‘Walk with me through a shelter, and I will find you that dog.’” 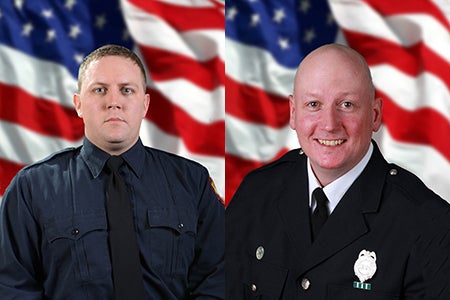 It could be said that firefighters are a tough breed. And, as Marie points out, week after week, they rush from one harrowing scene to another — and they keep coming back for more. That is, of course, unless they simply no longer can.

Such was the case when two firefighters in Toledo, Ohio, climbed through a second-floor window of a burning apartment building in January 2014, trying to help any remaining people still trapped inside. The firefighters, Jamie Dickman and Stephen Machcinski, didn’t realize everyone had made it out safely until it was too late. In a heroic effort to save others that day, they lost their own lives. Understandably, their fellow firefighters were in shock, and the grief only intensified when it became known that the fire was an act of arson. They would go on to spend more than two years waiting to relive the nightmare at an emotionally draining trial.

Meanwhile, an overweight Labrador retriever whose human had passed away languished at an Arizona animal control facility. Because of the facility’s low save rate, his future was alarmingly uncertain. Oh, and the dog’s name? Smokey.

Things began to turn around for Smokey when he and a few other animals were transported to Best Friends Animal Sanctuary in 2016. It didn’t take long for caregivers to notice there was something special about Smokey. He had a knack for connecting with people.

“They contacted me and said, ‘We’re pretty sure we have a dog you’re going to want to meet,’” recalls Best Friends animal behavior consultant Sherry Woodard, who screens and trains homeless dogs to become working dogs through the Canines with Careers program. Since 2009, she has helped more than 70 formerly homeless animals to become service dogs, therapy dogs, and detection dogs – among other roles. 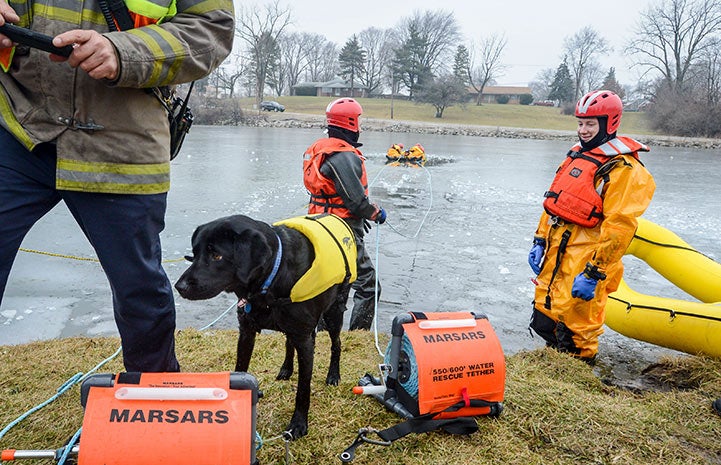 Sherry felt Smokey would thrive as a therapy dog. “Smokey is just an all-around great guy,” says Sherry. “His personality from the beginning showed that he loves people. He looks to make eye contact with people, as if he’s trying to see what they need.” Smokey was about two years old and 20 pounds overweight when he came to live with her, so she started helping him to eat more nutritiously, hike increasingly longer distances, and socialize with other pets and people.

After about a month, Sherry placed a call to her longtime friend, Marie Peck of the Fetch Foundation. When Sherry told Marie about Smokey and wondered if she, too, would like the opportunity to work with him, Marie’s answer came swiftly. “I jumped at the chance,” she says. “This dog was something else. He really was. Nothing fazed him — nothing. This dog was meant for the job of service.” And while Smokey continued his training with Marie, fire department officials in Toledo, Ohio, were trying to find a way to help firefighters there obtain emotional support. 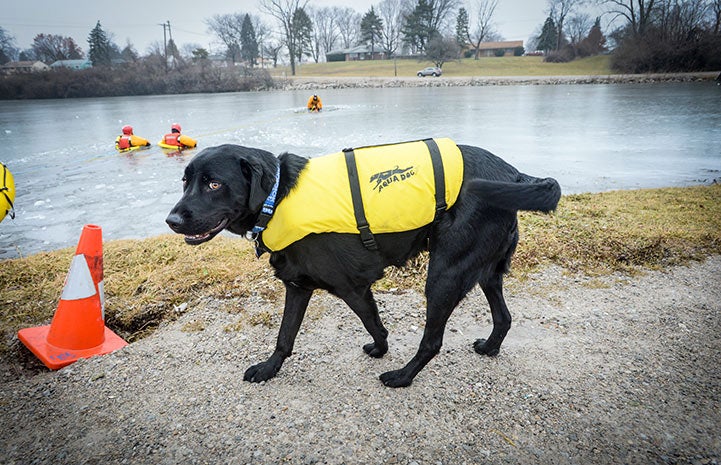 Rescued dog to the rescue

Karen Marquardt, assistant chief of the Toledo Fire & Rescue Department, is a big believer in both animal rescue and the power of comfort dogs to alleviate stress. She could see how much the firefighters were still hurting after the deaths of their colleagues.

Steve and Jamie had enjoyed close friendships at the fire department and, by all accounts, loved their profession. It is said that, in 1998, when Steve learned he had been accepted as a fire department recruit, he called his sister to share the news — but was so overcome that he could hardly talk. And Jamie’s enthusiasm was obvious, even though he had been a firefighter for only four months. He ran 5K races in full firefighting gear to help the department raise funds for safety equipment. He and his wife — also named Jamie — were so close that they were known as “Jamie squared.” When he died, Jamie left behind not only his wife but a three-year-old daughter and a baby boy. 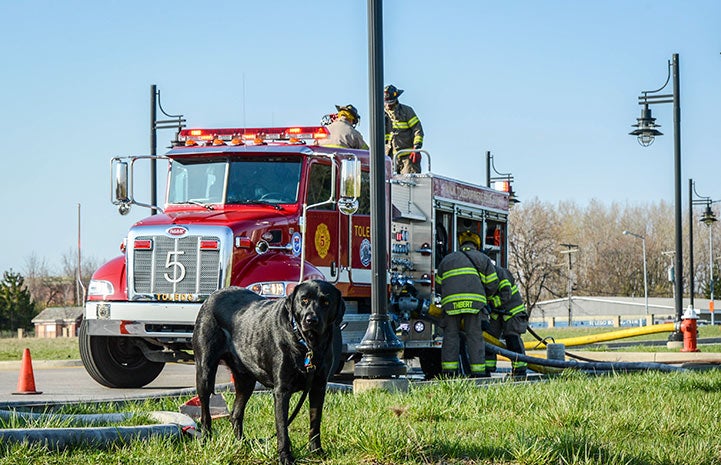 While fellow firefighters struggled to move forward, the mood was temporarily lifted when they encountered and helped some dogs in need. “We went out on a run one day and came across some dogs who were not being treated very well, so we rescued them,” recalls Rachel Doran, a firefighter and paramedic. “We took one and put her in our rig and brought her back to the station. Everyone on the crew recognized how much she brightened everyone’s day just by being there.” However, the unexpected passing of the puppy not long after left a huge hole.

The positive impact of that puppy was not lost on Rachel, so she approached Karen and inquired about the possibility of getting an official emotional support dog for the fire station. Karen gave Rachel the task of figuring out the logistics. “I had a sense that Rachel would make a great dog handler,” Karen says. “I felt so hopeful this could work.” And with that, the wheels were set in motion.

Rachel contacted Tracy Spader, co-founder of K9 Defender Fund, a Michigan group that provides safety and medical gear for working dogs. And Tracy reached out to Marie Peck. As Marie puts it, she was so excited to get Tracy’s call that she told her, “Give me another month with Smokey. I’ll take him to fire stations, have him stay overnight there and see how he responds to the sights, smells and loud sounds.” She goes on to say, “He was amazing — a natural fit.” 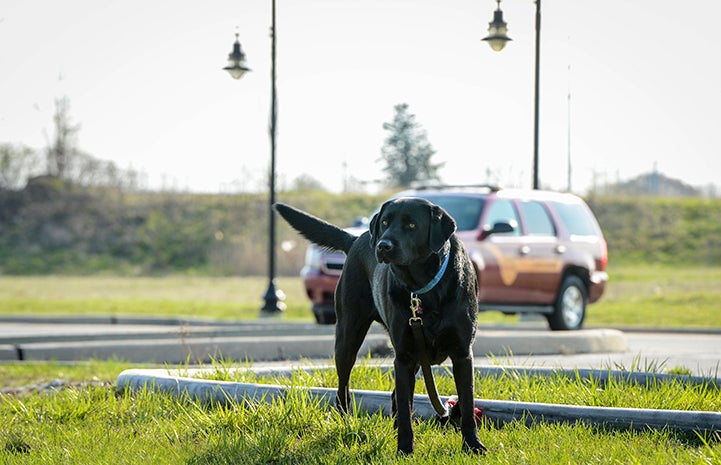 In the fall of 2016, Marie traveled to Toledo with Smokey so he could meet his new comrades at Station 5. “There were all these tough firefighters who had seen everything, and Smokey went right up to every single person in the room,” she says. “He’d make eye contact with each person and then move on to the next, and then the next. People asked me, ‘How did you train him to do this?’ I said, ‘I didn’t.’”

Smokey the dog is a godsend

Today, Smokey is a veteran fire dog. He often can be spotted relaxing in a recliner at the fire station or curled up in his dog bed in the back of a temperature-controlled ladder truck. He adores his handler, Rachel, and he also loves his schedule, which consists of long work shifts followed by carefree days off, when he goes home with Rachel and pals around with her other dog, a six-year-old named Khloe. 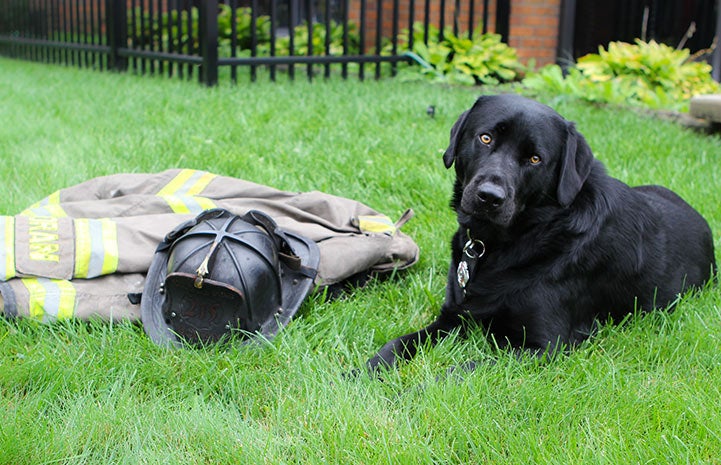 Rachel says her fellow firefighters (including those who previously were not fans of dogs) love having Smokey at the station. “Smokey comes up to say hello and starts wagging his tail, and he just makes you feel better,” Rachel says. “It’s so funny to watch some of the biggest, toughest guys in the department around him. Their voices get all high-pitched and they get so excited to see him.”

In addition to providing ongoing stress relief, Smokey played an especially important role in May 2017, during the criminal trial of the apartment building owner accused of setting the fire that killed Steve and Jamie. Crowds of people gathered in overflow facilities to watch the proceedings and to show support for the fallen firefighters’ families. After being found guilty of two counts of involuntary manslaughter and two counts of aggravated arson, the building owner was sentenced to 20 years in prison. “The trial was devastating,” Karen says. “We had firefighters who had to relive every moment of that day and testify about doing CPR on the body of a friend they had pulled out of the fire.”

Karen remembers the way Smokey diligently checked on Steve’s and Jamie’s family members throughout the trial — at lunch breaks, for example. His intuitive skill became especially apparent as it pertained to Jamie’s grieving dad. “Jamie’s father was so distraught that he wasn’t able to be in the courtroom,” Karen says. “He watched the proceedings on closed-circuit TV in another location. He would just be sitting there by himself, very stoic and really struggling. Smokey would see him, and he just knew. He would go lie by his feet.” Through tears, Karen adds, “Smokey has been a godsend for this fire department.”

Be a part of Best Friends’ lifesaving work 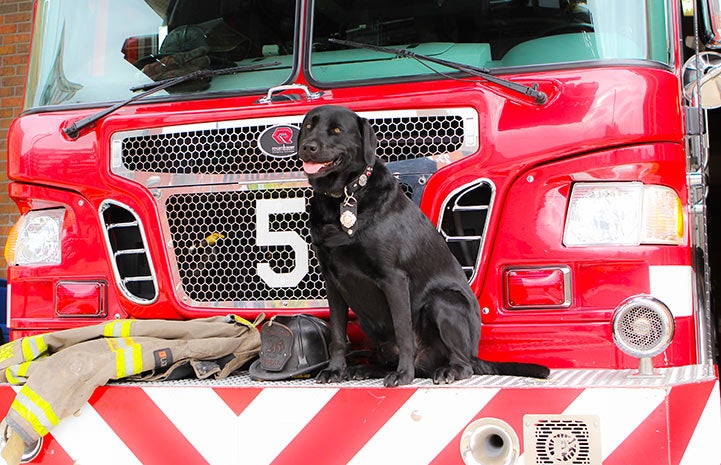