Oliver the Vicktory dog: Interview with his adopters

Image
Information about Oliver the Vicktory dog, who was rescued from Michael Vick's dogfighting ring, from adopter Erika.
By Best Friends staff

*We are sad to report that Oliver passed away due to cancer just before we spoke to his adopter Erika.

This is an excerpt from her message to Best Friends about Oliver's passing:

It is with great sadness that I am telling you that my sweet, dear, brave, beautiful Oliver passed away in my arms yesterday morning around 6:15 a.m. I want to thank each and every one of you for the beautiful life Oliver and I had together. Thank you for never giving up on Oliver so that he could bring so much joy and love to so many lives. Oliver was so very blessed to have each and every one of you in his life. I have so many fond memories of Oliver. He will forever be my heart. My love to all of you for all you have done. Oliver loved you all dearly. Thank you. May love and peace be with you. -Erika

More about Oliver from Erika:

What surprised you most about Oliver? 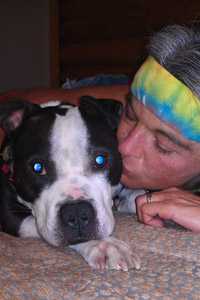 What surprised me most about Oliver was the fact that he allowed me to love him after all he had been through. He was such a warmhearted, sweet soul, and he had no fear in his new home and new surroundings. The fact that his original evaluation stated that he was extremely fearful of people and yet he would jump on my lap and shower me with kisses was amazing! The fact that Oliver would chase after my husband to play and bark was more than amazing!

What was your favorite thing about him?

Every morning when I would get out of the shower, Oliver would bolt just as fast as he could to lick my ankles. I called this "the blessing of the ankles." There were days that I would run late to work because I would stand in one spot or try to walk very slowly because Oliver was determined to lick my ankles and I could not leave until he was done. Oliver also did an excellent moonwalk. When it was time to eat, I would tap my fingernails on his food bowl, and he would moonwalk across the living room until I sat his food bowl down.

What was his favorite thing to do?

Wake me up by pressing his forehead against mine as hard has he could. Root around in my husband David's beard in the morning to wake him up. Bark and play and chase David. He loved to try to pounce on Squeaky (the cat) as well as Boss Man (his big brother who weighs 128 pounds) to play. Oliver also liked to stretch out and drag his back legs across the floor to stretch every single muscle he had. 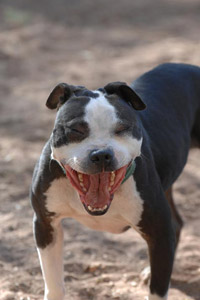 Everything! It was an absolute honor to be able to give Oliver a second chance. There are no words to explain how I feel about Oliver. It was an absolute honor to have him trust us after all he had been through. He had a way of getting into people's hearts, and he will always remain there. Oliver saved me from a life of anger. Since I couldn't control what happened to Vick, at least I could control how my emotions were channeled. I chose to channel all the anger towards Vick into love, and, in turn, give this love to Oliver.

What do you think people can learn from Oliver?

Look at each dog as an individual. Do not judge. Do not ever give up on any animal. Oliver could have very easily been "put down" due to his evaluations or due to his background. This would have been a horrible mistake! Oliver had so much to teach us all, and he did this quite well! Every single person who was involved in saving Oliver's life and not giving up on him deserves to know how much their efforts are appreciated. I think of Rebecca Huss (who served as the guardian/special master in the Bad Newz Kennels case) every day, and I am so thankful for her and the fact that she did not give up on Oliver. Oliver was diagnosed with cancer in August of 2011. He was given a very short time to live. I was blessed to have the best doctor in the world who went to the end of the Earth and back to try every single protocol to save Oliver's life and to make him comfortable.