'Only cat' makes a friend

Image
Sonny the cat was an 'only cat' (aka bachelor cat). Other cats stressed him out. But the right feline match came along and now he has a friend.
By David Dickson

At Best Friends, though, caregivers always remain hopeful that even so-called "only cats" might find a friend if they keep looking hard enough.

They tried introducing Sonny to a super-friendly, cuddly cat. In Sonny's eyes, though, this was way too much lovin'! "You could tell by his body language that he was stressed out," Michelle explains.

So, Sonny went back to bachelorhood. While caregivers love finding friends for everybody, they understand the match needs to come on the animal's terms.

For a while, Sonny lived alone. He began to relax, and actually started enjoying attention from his caregivers. "You could walk right up and pet him," says Michelle. That was a big improvement from before.

And then along came a next-door neighbor ...

'Only cat' (bachelor cat) and a feline friend? 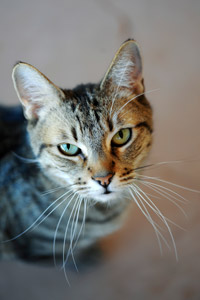 Sonny was living in one of the single-cat rooms at Cat World Headquarters when Fedora moved into the adjoining room. These two rooms are separated by a pocket door that can be opened partially or all the way.

Fedora seemed like the perfect candidate to make friends with Sonny. "She's confident," explains Michelle, "but she doesn't need to be in your face." It was clear Sonny didn't want a snuggle buddy. But could he make friends with a cat like Fedora?

Caregivers wanted to give it a chance, but again, on Sonny's terms. They started by cracking the pocket door ever so slightly. Then, by placing each cat's food bowl near the crack in the door, the two neighbors could get used to each other from a safe distance. Things looked promising. Sonny wasn't bothered one bit by this intriguing new neighbor.

After a period of time, caregivers started opening the door completely for supervised visits. These also went well. Fedora gave Sonny some distance, and they both got along just fine.

Caregivers tried longer and longer playdates until Sonny and Fedora were ready for an overnighter. Both cats did great every step of the way.

An ideal fit for two felines

These days, the two cats now share the same room. Success! Incidentally, Fedora is not FIV positive. Since the FIV virus can only be spread through serious bite wounds, these two can live together safely. "There's no reason Sonny can't live with a non-FIV cat if both cats are friendly," explains Michelle.

And they're certainly both friendly. To be clear, they're still not snuggle companions, and likely never will be. But that's not what Sonny needed anyway. "They respect each other's space," Michelle says.

This new friendship not only gives Sonny some company without stressing him, but also proves he can live with another cat who has the right temperament. That can go a long way toward helping him find a home.

Truly, there's somebody out there for everyone.

Setting the record straight about FIV

When it comes to FIV, many people are still confused about what's real and what's hearsay.