Image
Stray Lab puppy and her littermates come to Best Friends. Pup had parvo and intestinal worms, but has now recovered fully.
By David Dickson

If you happen to visit Beamer Robb’s Puppy Park (an outdoor puppy play area at Best Friends) and see a small black blur zooming back and forth at near-supersonic speeds, there’s no need to duck for cover. No, people aren’t firing cannonballs at one another from opposite ends of the puppy park. It’s just Gerty the black Lab puppy working off some of her endless energy! As it turns out, she has some serious backlog to work through. 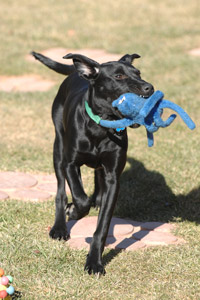 Gerty was found as a stray with her sisters, Estelle and Penelope, along with their mom, Nera. The puppies were in serious need of care when they arrived, Gerty most of all. Gerty was skinny, weak and dehydrated. All three puppies, along with their mother, tested positive for parvo. From that point on, the clinic staffers rolled up their sleeves to help all of them get better. It was clear early on that Gerty would need the most help.

"She was pretty depressed," says Best Friends veterinarian Dr. Patti Iampietro. "She was quite sick."

Pup sick with parvo and other issues

For five days, Gerty received fluids, antibiotics and other medications through IV. As if she wasn’t already battling enough medical issues, Gerty was diagnosed with intestinal parasites and needed to be dewormed as well. Poor girl!

She may have been a bit down at first, but Gerty perked up before long. "She was very outgoing," explains Best Friends vet tech Annick Popowich. Despite all the medical attention she required, Gerty enjoyed contact with humans and lit up with excitement when people visited with her. She also found another love while in the clinic that would turn into an obsession in rather short order: toys! "She always had a toy in her mouth when she was feeling better," explains Dr. Patti. 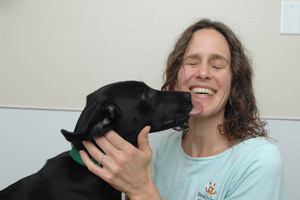 After a good week and a half in the clinic, Gerty had improved to the point where she and her siblings could move over to the puppy buildings. They still had to go through their quarantine period, which included receiving all their shots, before they could attend puppy preschool and meet the public. Once that wait was over, Gerty was able to taste freedom in the puppy park and the preschool room for a few brief days ... until she came down with a cough! Then it was back to quarantine.

In the end, it was around 10 weeks before Gerty and siblings had the complete medical "all clear," with no coughs, sniffles or other snags. During that time, staff members did all they could to allow the puppies a chance to get some wiggles out, but there’s nothing quite like a full romp in the puppy park or a nice long walk on the trail.

The 10 weeks ended recently, and all three puppies are doing incredibly well. As for Gerty, she’s now feeling so on top of the world you’d think she eats lightning bolts for breakfast. It’s a good thing she has so much energy to spare, really. Otherwise, how could she possibly spend enough time playing with all the many toys she adores?

Gerty loves, loves toys. Especially chasing after them. Fetch has become one of Gerty’s all-time favorite activities. Whenever she goes to the puppy park, or to the puppy preschool room, she immediately scampers around until she can find a toy to bring to somebody within visual range. If it’s the preschool room, she also likes to make sure and walk by the mirror in the room during her fetch rounds. And why not? Gotta see those toys from every possible angle!

Dog training to learn the basics

Best Friends dog trainer Tamara Dormer has been teaching Gerty the basics of sit, down, come and so forth. Gerty has already learned her own name, too. This is one smart little cookie. Cute as can be, to boot. "She’s just a sweet, sweet girl," says Dogtown staffer Wendy Williams. "She’s real cute in the classroom."

The medical staff at Best Friends has given Gerty and siblings a clean bill of health. They have no permanent challenges or sickness from the parvo or other health concerns they had upon arrival. All dogs are now ready for outings, sleepovers and, of course, adoption. So for anybody who wants a little extra zing in their life, Gerty is sure to not disappoint!

Considering giving a puppy a home?

If you’re looking for a puppy to share your life with, why not consider adopting one from Best Friends or a shelter near you?