Image
The benefits of being an office dog at Best Friends Animal Sanctuary are numerous. Read about all the perks for shelter dogs.
By Christelle L. Del Prete

Walk into almost any office at Best Friends Animal Sanctuary and you’ll find more than just people. Since the early days at the Sanctuary, dogs have been a part of office life here. Not only is it good for the dogs, it’s pretty great for people, too. Of course, dogs aren’t the only animals who make great office mates. Cats, parrots, rabbits and pigs also enjoy the pleasure of sharing an office with a human friend. 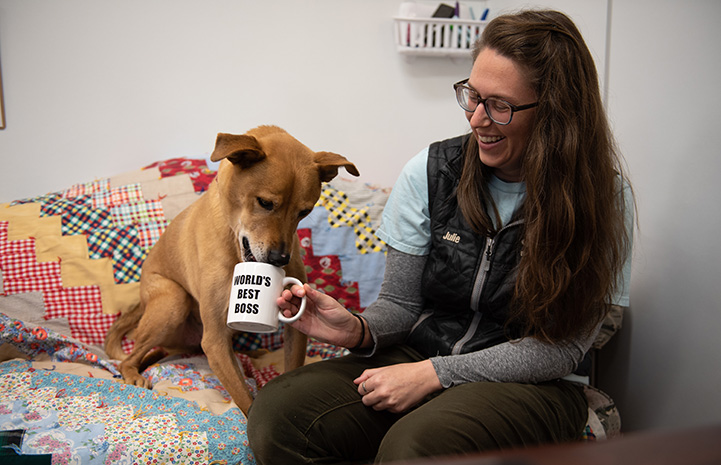 There are lots of different reasons why a dog might move out of Dogtown and into an office, either temporarily or for the duration of a Best Friends stay. Timmy came to the Sanctuary from a shelter in Houston, Texas. The young dog is happy and playful and likes other dogs, but he needed a temporary break from running and playing while he underwent treatment for heartworm disease. 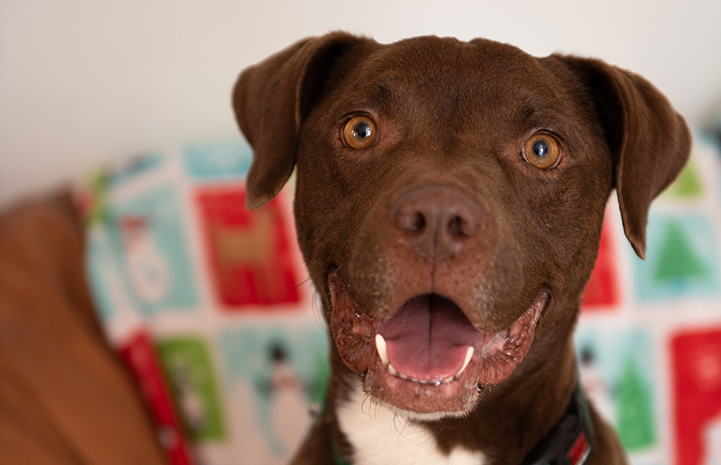 Heartworm is endemic in the south, and dogs like Timmy who come to the Sanctuary from Best Friends in Houston (and other areas where we’re working to help shelters increase their save rates) often need treatment. The condition is treatable, but part of that treatment requires that dogs must be kept calm. A side effect from the medicine used to treat heartworm can be an increased heartrate, which can lead to complications. So, for several weeks, only slow and steady activity is allowed.

Because most areas of Dogtown are very busy during the day and include lots of running and playing, it’s just not possible to keep a dog mellow and quiet for weeks at a time. So, Timmy stayed in Dogtown team lead Tierney Sain’s office, where he was encouraged to relax and nap as much as possible when he wasn’t out on a leisurely stroll.

Timmy completed his heartworm treatment in March and was able to move into another part of Dogtown. Now he’s free to run and play to his heart’s content. 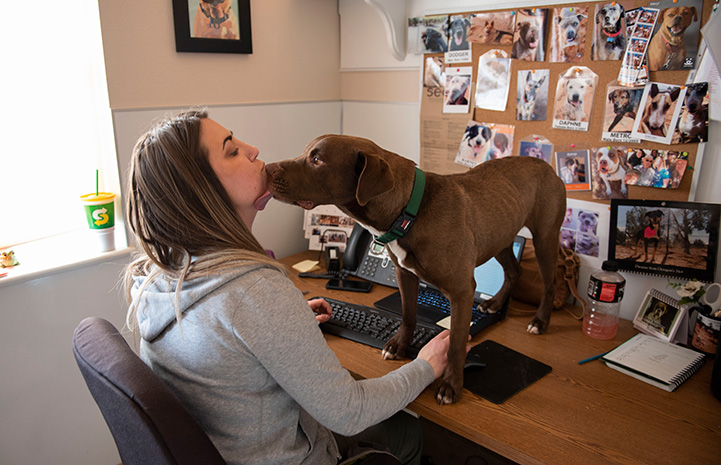 Getting creative to save and enrich lives

Offices are a great transitional place between the Sanctuary and a permanent home. They are also ideal spaces for single dogs — those who, because of medical or behavioral challenges, can’t live with other dogs.

Beyond accommodating individual dogs’ needs, spending time with a dog in an office setting can provide invaluable information to Dogtown staff and potential adopters. Since office spaces are more similar to homelike environments, the staff can learn how dogs might react to situations in a new home. For example, the way dogs react to office visitors provides clues as to how they will react to houseguests.

For dogs who find the hustle and bustle of daily life at Dogtown overwhelming at times, an office can provide a nice break and some decompression time. Having furry friends share office space can have a calming effect on people, too. Dogtown team lead Craig LaLonde says: “It’s nice to walk down the hallways and to say hello to all the office dogs. It also creates a different, more relaxed environment for meetings. It’s like having a therapy dog around.” 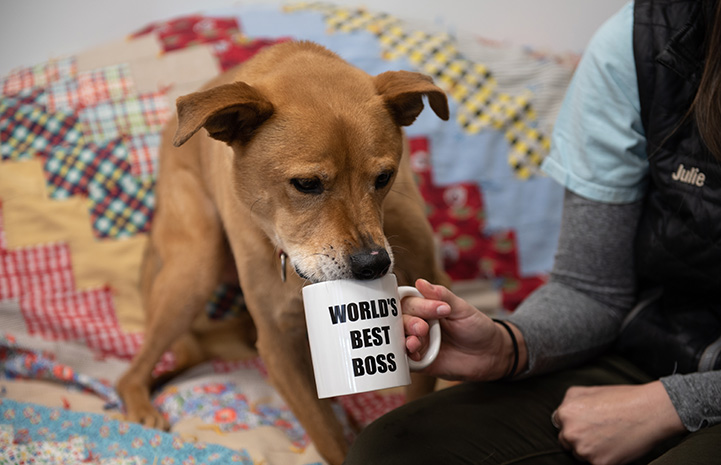 Then there are dogs like Orville, who like things a bit more low-key. When Orville was first brought to the Sanctuary, he seemed grumpy and didn’t want to be touched by anyone. He was overweight, covered in lumps and bumps, and he had some back pain. Once he got some much-needed veterinary care, lost some weight and began to feel better, Orville proved he was more sensitive than grumpy. He still doesn’t want to be petted by strangers (even when he seems to be asking for attention), so low-traffic environments are best for him, and he prefers to live as an only dog.

Craig’s office was the perfect solution for Orville. “He is happy here,” Craig says. “He still loves taking slow walks to sniff around, he loves car and golf cart rides, and he goes to hydrotherapy once a week for arthritis and weight management. Once he figured out the benefits of being in the office, he decided he doesn’t want to live anywhere else here.”

Since Orville is older and a bit of a couch potato, it doesn’t take much to make him happy. He likes to lie on his bed, look out of the windows and try to persuade office visitors to give him some treats.

Then there’s Shocky, who made herself right at home in the office of Dogtown manager Julie Tasch. Shocky was rescued after Hurricane Katrina when she was a tiny puppy. She’s always had some physical challenges, but when she was younger, they didn’t bother her very much. 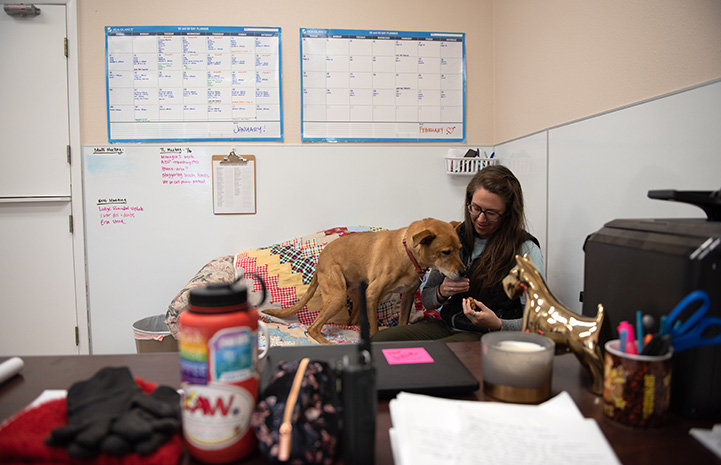 Back then, Shocky wanted to be running around outside in her yard all the time. But now that she’s 13 years old and has slowed down due to pain in her back end, it has become harder for her to get around. Her caregivers thought she could benefit from living full-time in an office. Before she became manager, Julie was a caregiver at Dogtown, and Shocky was one of the favorite dogs she took care of every day. So, when Julie had space for a dog in the manager’s office, Shocky was her first choice.

He moved in, and right away was so comfortable on her bed with its piles of blankets that Julie had to coax her to get up and go outside whenever she needed a potty break. Shocky needn’t have worried. She’s not in any danger of getting evicted from the office. Julie loves having her there as much as Shocky loves being there. 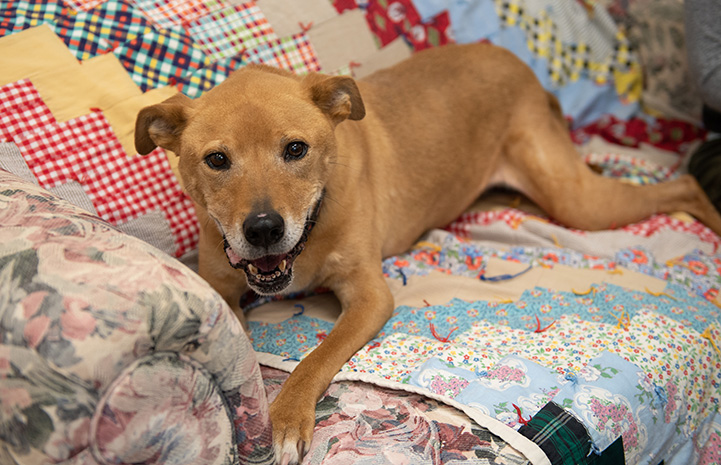 “Because I started at Best Friends as a caregiver and now I have an office job, the hardest part is the lack of dog time. Having an office dog benefits the staff as well, because it helps us to keep that feeling of connection with the dogs,” she says.

Spending time in an office can be a particularly helpful part of socializing shy dogs. That includes dogs like Pecos, a gentle giant who is afraid of his own shadow. Pecos was already six years old when he came to Best Friends from another rescue organization. It was clear that he hadn’t had much socialization early in his life.

Pecos needs help building relationships with people, and an office setting helps him get used to people’s routines, noises and everyday activities. The more familiar Pecos gets with such things, the easier it will be for him to someday transition to a home of his own. Even though he has a large, den-like crate where he can rest out of sight if he is overwhelmed, Pecos is acclimating to the rhythm of people’s lives and learning to become a part of that rhythm.

Though they might not be good at answering phones or typing, canine office mates will never leave dirty dishes in the sink or steal all the good pens. Not only do they make great at-work companions, a stint in someone’s office at Best Friends might just be just the thing to help them land at an even better place to crash — a new home.

Donate and Save Them All