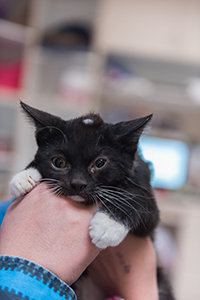 ​Udon Noodle might sound more like something you’d order at a Japanese restaurant than the name of a little black-and-white kitten who faced an uphill battle from the very beginning of his life. But he’s just as irresistible.

Although the kitten named Udon Noodle is hard to resist, he had little chance of surviving very long before he came to Best Friends. Now, the four-month-old kitten has the best possible chance at a full and happy life.

Stray kitten ends up in a city shelter

Udon Noodle was only four weeks old when he found himself in a California shelter. Not only was he young and fragile, but he also had a big lump on his head. He showed signs of neurological problems, too, as he seemed a bit wobbly and stiff in his hind end.

Being a kitten in a shelter isn’t easy. Neonatal and very young kittens are especially at risk of being killed in shelters because they are weeks away from being old enough to be spayed or neutered and adopted. And they’re more at risk of getting sick than older cats with more well-developed immune systems.

Most shelters have a hard time handling the number of healthy kittens arriving every summer, and this puts little ones (like Udon Noodle) who need more care at even more risk. But there’s help for them, too. That’s why Best Friends has so many programs to help prevent more kittens from being born to help save those ending up in shelters. 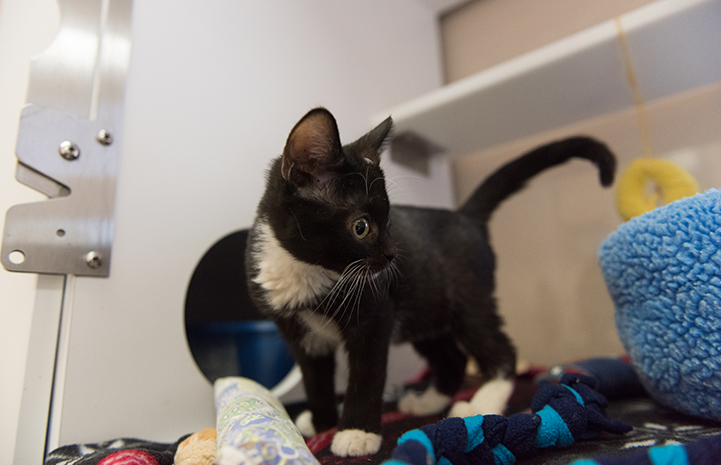 Udon Noodle was going to need much more help than the busy shelter could give him, so he went to Best Friends in Los Angeles and was eventually brought to the Sanctuary. Though no one knows exactly why Udon Noodle is the way he is. It turns out that he had even more physical challenges than anyone was previously aware of. Besides the cyst on his head, he has a hole in his skull, which requires that he be handled especially gently. He’s also blind, and while he may not be completely deaf, he has trouble hearing.

While it’s possible that Udon Noodle’s neurologic challenges could worsen with time, there is also a chance that they won’t. Best Friends vets are taking a wait-and-see approach while staying positive about his future. Everyone wishes him a happy and comfortable life, and they are wasting no time making sure he gets just that. 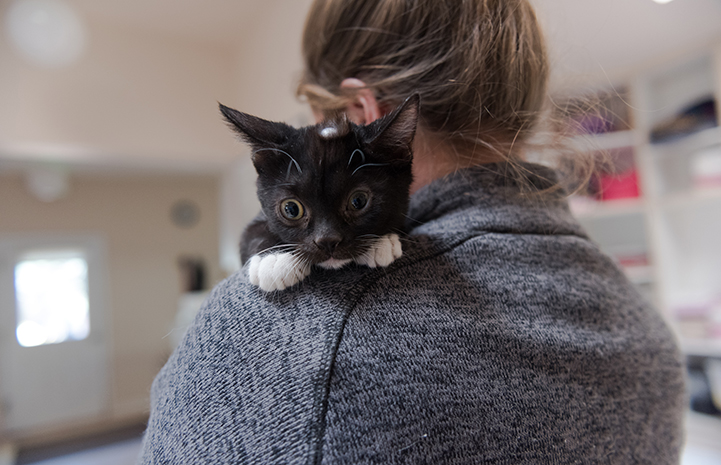 Udon Noodle is free to dream of a bright future, because he clearly doesn’t know he’s different from other kittens, and his challenges don’t seem to bother him at all. Even though he can’t see or hear very well, he always knows when he has a visitor at Cat World, and he rushes up to greet them. He loves affection, snuggles and playtime, and he really gets his grub on at mealtimes. Watching him learn to climb up a cat tree is proof that he’s a tough little kitten. After a few hesitant attempts, he grips the sides of the post and scales it like a pro.

Because he is so full of life — and none of his challenges have stopped him from loving his life — Udon Noodle inspires hope in everyone who meets him. Now that he’s at Best Friends, this little noodle’s dream of a special home and a life as a loving pet is well within reach. And it will be delicious. 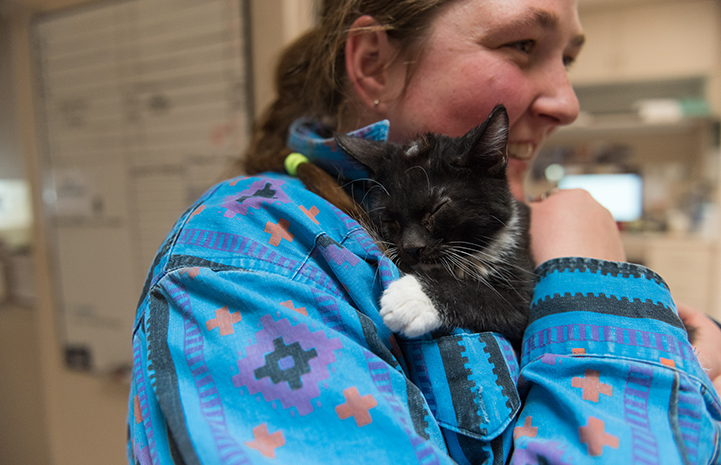