Image
Dog is a surrogate mother to six puppies. After her selfless service, she gets help with socialization with adult dogs since she displays reactivity.
By Christelle L. Del Prete 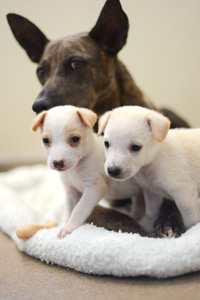 Brigit had to be a pretty sweet and nurturing dog to become a surrogate mother to six helpless puppies. When she came to Best Friends Animal Sanctuary from another rescue organization to finish raising those puppies, she proved to be an excellent mother who loved and protected them as if they were her very own babies. But once they became independent (and quickly got adopted), it seems Brigit had forgotten how to make friends with adult dogs, or maybe she never knew how to do that in the first place.

Either way, the spunky young mother dog was awkward with other dogs. And she was downright bristly if she met them while she and the other dog were on leashes. She’d run to the end of her leash, bark, throw herself on the ground and cause quite a scene. It was no way to make friends, and it didn’t make going for a walk very fun for her.

Helping a dog get along with other dogs

Since most dog introductions in Dogtown begin with dogs leashed and walking a safe distance from each other, Brigit lived alone at first. But Dogtown caregivers who’d seen her tender, mothering side knew Brigit could live peacefully with her own kind, and that she would benefit from having a doggy friend. There was no doubt she could enjoy canine companionship again — if only she could make it through an introduction.

So caregivers began working intensely with Brigit to give her that chance. After all, learning to stay calm around other dogs would help her in other ways, too. For example, it would mean she could go on outings and sleepovers with volunteers, and she’d be more likely to find a forever home, since many potential adopters already have dogs at home.

Brigit started her training program by simply learning how to come out of her room and walk through her building without getting upset at the dogs around her. Once she overcame that challenge and got outside, she could learn to walk past the dogs who were outside in their yards.

None of this was easy, but Brigit loves treats and she’ll do just about anything to get them. Soon, she learned that if she just looked at the other dogs calmly and then looked back at her caregiver or trainer, she would get a yummy treat. Now, although she is still sometimes tempted to bark and run around when she sees another dog, she’s learned how rewarding it is when she focuses on the person she’s walking with.

A solid friendship with another dog 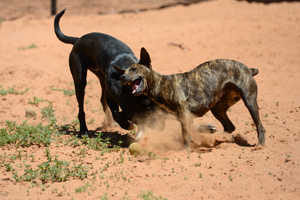 These days, walks are a lot less stressful for Brigit, and life is much more fun. She’s even got a roommate. With her newfound skills she was able to meet Porthos, a playful Lab mix, in a safe, neutral space where the two quickly became friends. Now, their friendship is solid and Brigit — with her mothering days behind her — often shows her silly, puppy side when the two play. She loves to chase, wrestle and play fetch with Porthos.

Having a dog friend means Brigit can wear herself out playing every day, and now that she’s able to go on those outings and sleepovers with Sanctuary volunteers, this sweet, deserving girl takes every opportunity to rest, snuggle and soak up as much love as she once gave her pups.

Keep the successes coming by helping more animals like Brigit.