Teaching a dog to read

Image
Cat a dog learn to read? Yes! Read about one dog who is learning to read cues on signs and how a trainer is teaching him to do this.
By Christelle L. Del Prete

You wouldn’t guess by his name or his massive size, but Moose the dog has been a rock star on Dogtown’s indoor agility course for almost a year now. He also knows some fun tricks, like how to back up at the cue “beep, beep, beep.” He’s incredibly smart — so smart, in fact, that he’s learning to read.

Moose also has frenetic energy to spare, and keeping him busy and giving him new challenges helps calm him down. So Terran Tull, a Best Friends behavior consultant, decided to test Moose’s skills in a whole new way — by teaching the dog to read.

In one training session, Terran stands in Moose’s yard and takes the sign she’s been keeping behind her back and holds it up for him to see. It’s a simple wooden-handled sign with a blue cardboard folder as the background. In the center of the sign on white paper, the word “sit” is spelled out in capital letters.

Despite what it looks like, Moose isn’t actually responding to the words on the signs — not yet, anyway. But one day he will. 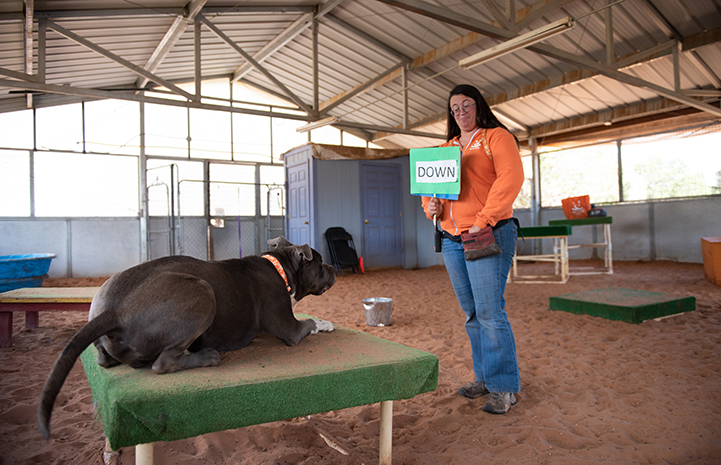 Can a dog learn to read?

Teaching a dog to read is different than teaching people. Moose won’t learn the alphabet, but Terran will give him other visual clues to help him learn different words until he gets to the point where he can look at a word’s shape and know what it means. But first, Moose is looking for other clues to whether he should sit or lie down when Terran holds up each sign.

The signs are the same size and shape, but the background of the “sit” sign is blue, while “down” is green. Dogs can’t see colors as vividly as humans do, but they can distinguish different hues.

Terran also holds the signs in different hands and on different sides of her body. “Down” is on the left, and “sit” is on the right. At this stage of his learning, that’s probably how Moose tells the difference between the signs. But, Terran says, “Moose is very smart, so we’re working up to the point where he can tell that the words themselves look different.”

What’s the point of a dog reading signs?

Terran says that “reading lessons” are good way to keep dogs who like to learn happy. “I want to tap into dogs’ ability to think and give them out-of-the-box opportunities to learn. Teaching them to read (or to recognize signs) is different and interesting. It gives dogs one more thing to think about and do. It’s a chance for them to learn something completely different from anything they’ve done before.”

As for Moose, he’s moving on to the word “shake.” Meanwhile, Terran is working on positioning the signs closer to the center of her body (rather than holding them on the left or the right side) so that Moose will have to focus on the word itself rather than take a hint from the sign’s location.

Since he’s the kind of dog who thrives on both physical and mental activity, Moose loves the exercise, which allows him to build on the impressive list of things he’s already learned and is yet another way to develop his smart dog skills.

How to teach a dog to read

Teaching dogs to do what Moose does isn’t as complicated as it seems. It’s the same concept as adding a hand signal to a verbal cue. For example, once a dog knows how to sit extremely well with a verbal cue, he can easily learn how to do the same thing when someone holds a hand out or palm up. “It’s called transferring the cue,” says Terran. 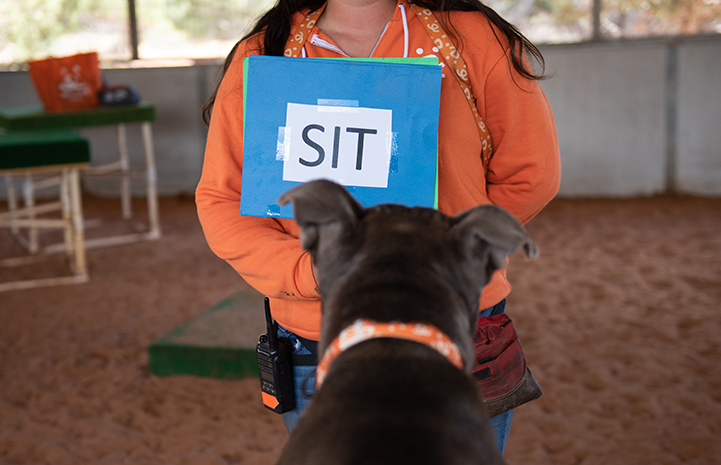 The steps to teach a dog to read are easy: