For a while, Cinnamon and Roly Poly were the two of the easiest cats to locate at Best Friends Animal Sanctuary. As you stepped through the door in Cat World, Cinnamon would be relaxing in her bed just a few feet away. She was always stretched out in her spot, watching anyone who walked by. If it was feeding time, you might also catch a glimpse of Roly Poly as she peeked out from the bathroom and then immediately marched and stumbled back to hide. She was always tucked away in the corner.

One was stationary, only moving her head or lightly stretching out a front paw. The other flew around the corner as soon as she was spotted, kicking carpets around as she went. And Holly DeYoung fell in love with both of them. 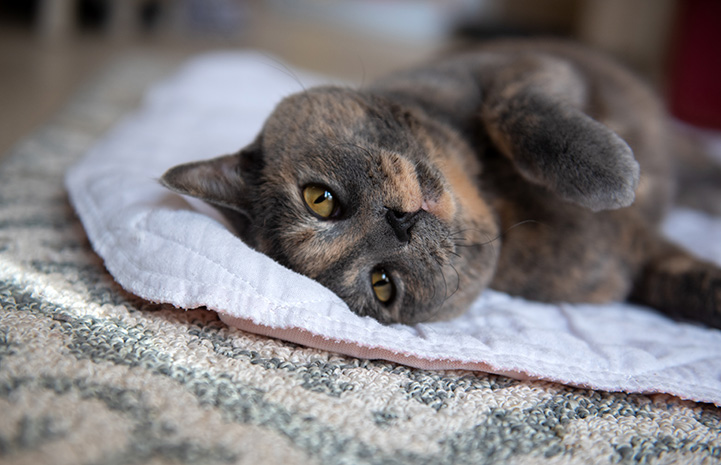 Similar but opposite, both perfect

In some ways, the two cats are very similar ― both dilute tortoiseshell ladies, both with their own designated spots and both with mobility challenges that differentiate them from other cats wandering the lobby. But when it comes to their personalities and how their individual conditions affect them, they’re quite opposite.

Quiet and timid, Roly Poly has cerebellar hypoplasia, a neurological condition that causes her movements to be jerky and uncoordinated. Because she has a relatively mild case, she’s able to get in and out of the litter box on her own and move around mostly unhindered. Her walk, often likened to marching, is especially endearing to her caregivers.

Cinnamon, on the other hand, is a bit of a medical mystery. She’s a talkative, outgoing cat who loves attention from people; however, at a young age she suddenly became unable to stand or walk. There were no injuries to explain it, and every test by veterinarians came back inconclusive.

For Holly DeYoung, both of them were perfect. 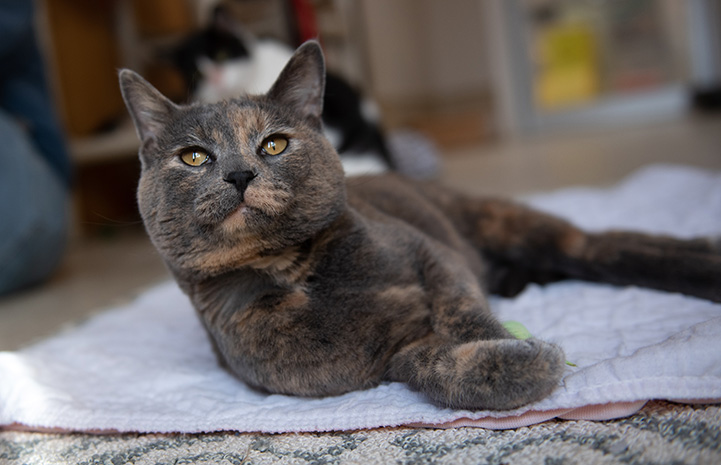 Cat fan learns about cerebellar hypoplasia and other mobility challenges

Holly describes herself as “a cat fanatic … always have been, since I was a toddler.” Her first cat was with her from age five all the way to college and lived to be 22 years old.

“When I was in Africa,” Holly says, “I was that weirdo running around the village trying to save the kittens.” She frequented cat cafes when she was living in a place where she could not have a cat. Of course, watching cat videos was a must.

When she first saw a cat with cerebellar hypoplasia (CH), Holly says her heart broke: “I thought they were in pain. I thought all of this stuff. And so then I started reading up on it.”

When she learned that some cats are born this way, aren’t in pain and that it’s a nonprogressive condition, she couldn’t understand why more people weren’t adopting them. She eventually got firsthand experience in San Francisco volunteering on weekends with a rescue organization for cats with special needs. She met many cats with various mobility challenges. “It’s impossible not to love them,” she says. 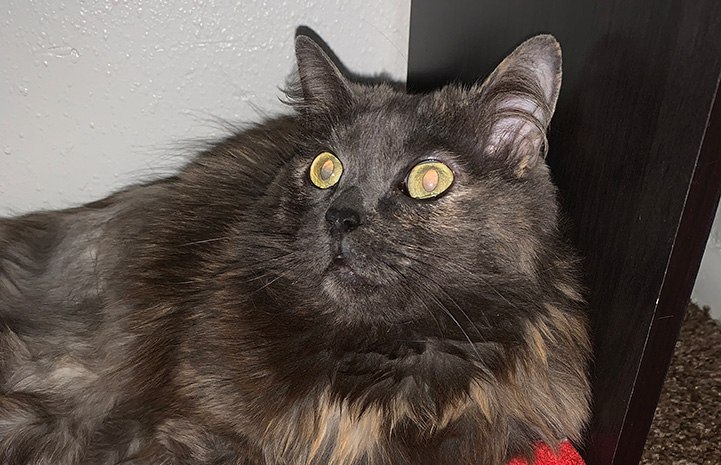 When Holly was looking to adopt a cat, she admits the plan was to get just one. “I asked my friend to be on the phone with me during the process for that exact reason,” she says with a laugh. “If I’m not supervised, I’m going to end up with two.”

If you’ve read this far, you probably already know how things worked out. After looking at some of the other Sanctuary cats with CH, she headed back home with Roly Poly and Cinnamon. The tag-team duo completely stole her heart. 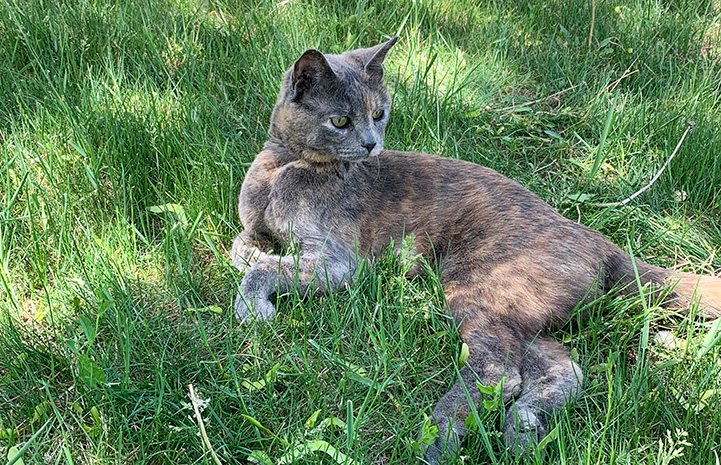 At home, Holly has plenty of time to be with the two newest additions to her family, who are settling nicely into their new space. Roly Poly has a cubby to hide in that she can call her own, but Holly says things are changing. “She’s coming around to me (and) she won’t even hide anymore when I come in,” she says.

The timid cat has started coming out of her shell, is becoming playful and is seeking attention as she gets more and more comfortable. “She’s trying to get on the bed at night,” Holly says, “so I bought a set of stairs so she can get up there if she wants.”

Roly Poly is even trying to make friends with Cinnamon, though Cinnamon hasn’t yet decided to accept the friendship. “It’s really funny to walk into the room and see Roly Poly just sitting there staring at her from a foot away,” says Holly. “But she’s taking her time and not starting any drama with the less mobile cat, so there’s still hope.”

While Roly Poly is hiding during the day, Cinnamon gets all the attention she wants. “She loves being brushed,” Holly says. “When I brush her, she chews on the brush. She’ll take it and just throw it around with her head.”

Cinnamon gets time in the sun outside on the grass. There’s a secure window perch for her to look out at the world when she’s indoors, and Holly’s even thinking of setting up a little kitty entertainment center with an iPad for Cinnamon to watch bird videos. 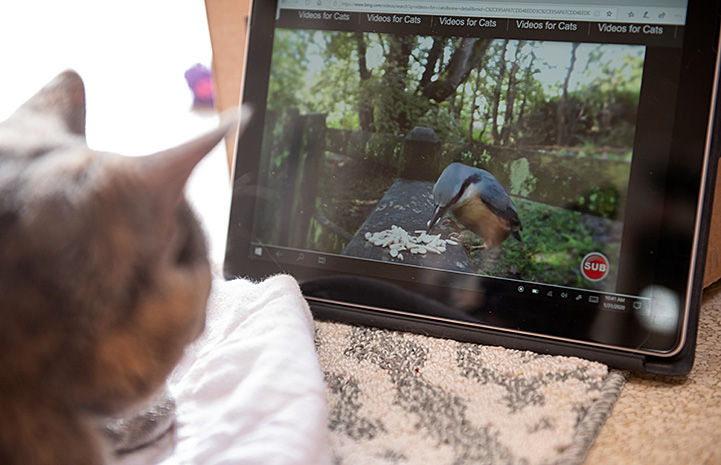 Holly talks about all her plans for spoiling her two new special kitties: a big cat tree, a stroller, window perches and more. She’s excited to learn more about different physical therapies she can practice with Cinnamon, and chuckles about getting her own acupuncture treatment alongside the cat.

Holly’s not the only one in love with the pair. The neighbor’s 10-year-old daughter is fiercely protective of Cinnamon, and Holly’s boyfriend, who works away from home and hasn’t yet met the two cats, is already head-over-heels for both of them.

Cinnamon and Roly Poly — now Penelope and Margot Mousie, respectively — are a couple of very lucky ladies. No matter how similar or how different, these two special cats are getting all of the love they could ever want. 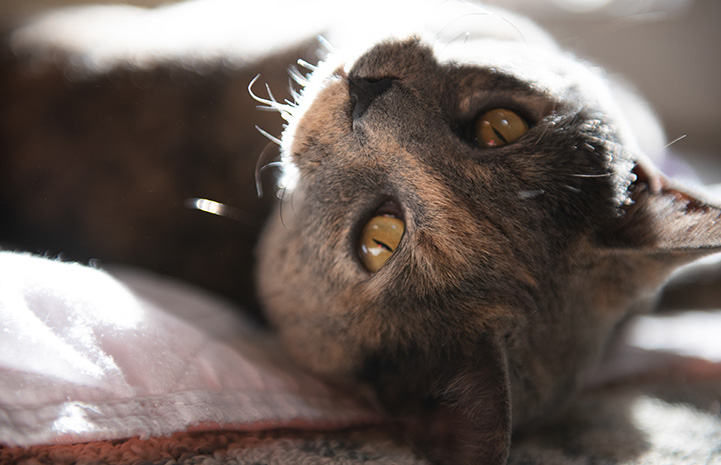 Photos courtesy of Holly DeYoung and by Molly Wald