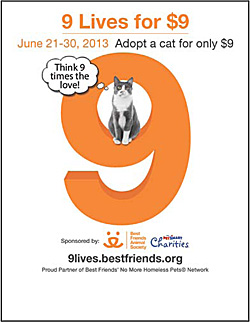 Last year more than 1,200 rescued cats joined families across the country during this promotion. Participating animal shelters and rescue groups* are part of Best Friends' No More Homeless Pets® Network, a program of Best Friends Animal Society which offers help and support to animal organizations that save animals' lives in their communities.

"Reducing adoption fees during last year's promotion helped to increase cat adoption numbers, and some of our partners even reported increased adoptions for dogs and other species as well," said Tami Simon, Best Friends' network events supervisor for the No More Homeless Pets Network

"The reduced adoption fees and the special event feel of the ‘9 Lives for 9 Dollars' promotion encourages people to consider adopting rescued cats.

"Most Americans are bargain hunters and once we can get them in the door for the promotion, they learn they can adopt a cat whose personality and health is known to their local reputable rescue group or shelter," Simon said. "They can feel safe that the kitty is completely ready to become part of their family and then they see that their animal organization is working to match them up with the perfect cat for their home. The results speak for themselves, 1,200+ happy cats in new homes and this year, we anticipate the number being even higher," Simon added."

Reports back to Best Friends following last year's "9 Lives for 9" adoption promotion proved that offering people a special reduced rate during a short set time period worked well. Groups followed their same adoption procedures and qualifications and found that nearly nine out of 10 of people who applied to adopt a cat during this promotion were of the same quality or higher than at other adoption events.

Following are testimonials from some of the groups that participated:

"I feel like you enabled my rescue to ‘explode,' for lack of a better word. Having a small rescue like ourselves partner with such a big name as Best Friends really took us to another level. I got emails not only from people interested in adopting, but from people wanting to volunteer, people offering things like help creating our brochures, and others just commenting that they like our logo." - Charm City Animal Rescue (Baltimore, Md.)

"This event allowed us to find homes for six of our adult cats. That is a huge number for us and, while following our adoption guidelines, brought more adopters taking advantage of the special price but also gave us much appreciated exposure in neighboring, more populated counties." - Union County Humane Society (Maynardville, Tenn.)

"It's very positive. The Best Friends name adds a lot of weight to the event and definitely gives us good publicity. Also, every adopter from this event gave us a donation near or above the regular adoption fee. The promotion did not take away from our adoption fee income in the slightest." - Safe Haven for Animals (Middleburg, Fla.)

*To find a participating animal shelter or rescue group in your area, visit 9Lives.bestfriends.org.

About No More Homeless Pets® Network

The No More Homeless Pets® Network is a program of Best Friends Animal Society focused on building relationships and working with other rescue organizations and municipal shelters all across the country to end the killing of dogs and cats in our nation's shelters. The Network is comprised of 501(c)(3) public charity animal welfare groups and shelters committed to saving the lives of homeless pets through active adoption and/or spay/neuter programs. Network partners are provided fundraising opportunities and adoption events, consultations with Best Friends staff, assistance with networking animals, and the opportunity to apply to Lifesaving Grants. Participation in the program is free of cost.