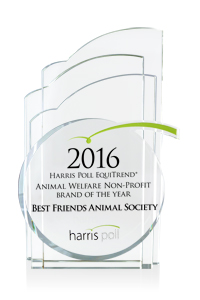 Best Friends Animal Society has been named a Brand of the Year in the 2016 Harris Poll EquiTrend® study.

Measuring brands' health over time, the EquiTrend Brand Equity Index is comprised of three factors -- Familiarity, Quality and Purchase Consideration -- that result in a brand equity rating for each brand. Brands ranking highest in equity receive the Harris Poll EquiTrend "Brand of the Year" award for their respective categories. (For non-profits the Purchase Consideration correlates to likely donation.)

"From its inception in 1984, Best Friends Animals Society has always put a high value on integrity and connecting with its members. It is gratifying to be recognized for these qualities by one of the world's leading market research firms."

Established in 1984, Best Friends Animal Society operates the nation's largest no-kill animal sanctuary for abused and abandoned animals; leads the NKLA (No-Kill Los Angeles) initiative, a coalition of more than 110 city shelters and rescue groups to end the killing of pets in L.A. city shelters simply because they don't have safe places to call home; through its Best Friends Animal Society Utah program the organization is leading a coalition of animal shelters and rescue groups to take that state no-kill; manages the Best Friends Animal Society No More Homeless Pets Network - a national collaboration of more than 1,500 501(c)(3) public charity rescue groups, spay/neuter organizations and shelters actively saving lives and reducing kill rates in their communities; and drives national initiatives on a variety of animal welfare issues, including puppy mills, improving the reputation of pit bull terriers, and saving the lives of community cats.

Best Friends Animal Society received the highest numerical Equity Score and the highest numerical score relating to Love and Trust among Animal Welfare Non-Profit brands included in the 2016 Harris Poll EquiTrend® Study, which is based on opinions of 97,120 U.S. consumers ages 15 and over surveyed online between December 22, 2015 and February 1, 2016. Your opinions may differ. "Highest Ranked" was determined by a pure ranking of a sample of Animal Welfare Non-Profit brands.

Best Friends Animal Society is the only national animal welfare organization dedicated exclusively to ending the killing of dogs and cats in America's shelters. A leader in the no-kill movement, Best Friends runs the nation's largest no-kill sanctuary for companion animals, adoption centers and spay and neuter facilities in Los Angeles and Salt Lake City as well as lifesaving programs in partnership with more than 1,500 rescue groups and shelters across the country. Since its founding in 1984, Best Friends has helped reduce the number of animals killed in American shelters from 17 million per year to an estimated 4 million. By continuing to build effective initiatives that reduce the number of animals entering shelters and increase the number who find homes, Best Friends and its nationwide network of members and partners are working to Save Them All®.