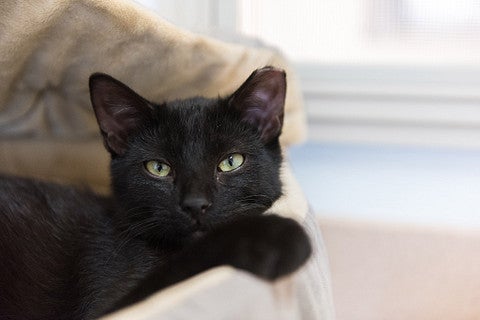 We can’t let August 17 slip by without recognizing Black Cat Appreciation Day! Black cats are often overlooked in shelters and rescues, so Best Friends Animal Society is taking this opportunity to appreciate and elevate the status of black cats and to show anyone looking for a forever friend that these cool cats are beautiful inside and out.

No one is exactly sure why black cats get a bad rap, but some people believe black cats don't get adopted as easily because potential adopters are superstitious and fear a black cat will bring them bad luck. But in many cultures and regions of the world, black cats are seen as lucky.  It’s more likely that black cats get overlooked in shelters simply because they don't stand out. With dozens of pets to choose from, people tend to be drawn to the animals who catch their attention. If many of the cats in a shelter are black, it's harder for people to pick out their unique qualities because they look so similar to each other. A person choosing a black pet to adopt will have to meet and handle several to see which one they fall in love with, so it involves a bit more of an emotional investment.

Wondering where these silly superstitions come from, and why anyone still believe them hundreds of years later? Don’t we have more important things to worry about these days?

One theory is that during the Middle Ages, people believed black cats to be shape-shifting witches, and from then on, they were seen as evil entities, mischievous or unlucky. Although these days nobody really believes black cats are witches or demons in disguise anymore, they are sometimes seen as signs of bad luck.

But fortunately, not everyone sees black cats in a negative light. In fact, black cats are actually welcomed and celebrated by a lot of people. For some, a visit from a black cat means good luck, and for others it means prosperity or romance. In some cultures black cats are even worshipped. In Celtic mythology, it was believed that fairies could take the form of black cats, and therefore their arrival to a home or village was seen as sign of good luck.

Celebrate Black Cat Appreciation Day by adopting a black cat or kitten (or a pair) from a local shelter or rescue group. Black cats and kittens get less attention from adopters, so shelter and rescue staff will be happy to share all the positive points about their dark-colored darlings. If you aren’t ready to adopt, you can help by fostering!

If you already share your life with a beautiful black cat, celebrate by proudly posting photos on social media to spread awareness about the day! Let your cat know it’s his or her special day by getting them a new treat or toy and spend some extra time with them.

And even if you can’t adopt your own cat due to allergies or your housing situation, that doesn’t mean you can’t celebrate this day! Making a donation to your local animal shelter can help countless felines and get you in good with the cats of this world…and honor their possible magic powers.

Throughout my life and my animal welfare career, I've found that some of the most loving, friendly, and outgoing cats I've encountered are black.

I've also found black cats to be quite intelligent. I grew up with two black cats and was able to easily teach them tricks as a child.

Their sleek, shiny coats are stunning. And, since we wear a lot of black, their fur doesn't show up on clothes as much.

They tend to live longer than lighter colored cats due to stronger immune systems.

I lived in Japan for a couple of years, and they think of black cats as good luck! I brought that belief back with me to the states and I've found it to be true!

Their fur is not only gorgeous but also fascinating, because it can turn rust/brownish in the sun, and it gets little flecks of white as they age, like us.

I've found that black cats often get the best homes. The adopters that come in are more concerned with a cat's personality and compatibility than their fur color and tend to be wonderful cat owners!

Who wouldn’t want a miniature panther in their home?

Lots of cats and kittens are looking for homes, so there’s no better time to adopt or foster a black beauty or two.