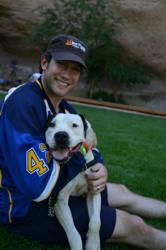 ​KANAB, UTAH (JUNE 21, 2013) - David Backes, captain of the St. Louis Blues and his wife, Kelly, who visited the nation's largest no kill animal sanctuary this week, says their visit has inspired them to "dream big" in their own efforts to help homeless pets.

The couple celebrated their fifth wedding anniversary with a visit to Best Friends Animal Sanctuary, which is owned and operated by the national animal welfare organization, Best Friends Animal Society. They wanted to learn about Best Friends' operation as part of their research into successful animal rescue organizations as they consider starting their own animal charity. Back home in St. Louis, they are active in animal rescue and foster dogs.

"I'm blown away by the size and scope of the Sanctuary," Backes said during the visit. The Sanctuary sits on more than 3,700 acres, surrounded by some 17,000 acres of undeveloped land in southern Utah's scenic red rock canyon country.

During their tour of the sanctuary, David and Kelly walked into the cat headquarters building and ran into a couple of St. Louis hockey fans. Lisa Adcock and her 12-year-old son, Jeff, were in the midst of adopting one of the sanctuary cats.

"We were shocked and surprised to see the captain of the St. Louis Blues stroll in," Adcock said. "My son is kind of bashful but he was really excited." Adcock snapped a photo of her son and Backes. "And I could kick myself; I didn't think to get a photo of myself with David."

The Backes not only toured the sanctuary, but helped with the day to day chores of taking care of some of the 1,600 dogs, cats, horses and other animals that find refuge at Best Friends on any given day. They played with kittens -- which is an important part of helping the frisky felines become socialized and more adoptable. They walked a special needs older dog recovering from surgery and helped with the chores at one of the dog buildings.

Backes even offered to scoop poop. "I'm a pro at that," he said. "We have plenty of practice with our own four dogs at home."

Backes said hearing about how the Best Friends founders "built this place from the ground up with everybody coming together and working together" has given him and his wife Kelly "the inspiration to dream big" for their own charity.

The couple also participated in Best Friends' sleepover program, where volunteers can "check out" a dog or cat for an overnight visit. The program gives the animal special one-on-one time with people and provides the caregivers with invaluable information on how the animal does in a more home-like setting. They spent the night at one of the cottages on Sanctuary grounds with Vince, an affable pit bull. The next day Backes donned his #42 jersey for a photo with the dog.

After his visit to Best Friends, meeting the animals and hearing the stories of how some of them ended up at the sanctuary, Backes said he was more convinced than ever that "the only way to save the lives of the millions of animals in shelters is to focus on the big picture, to fix the problems of why animals are going into the shelters."

Best Friends Animal Society is a national animal welfare organization building no-kill programs and partnerships that will bring about a day when there are No More Homeless Pets®. The society's leading initiatives in animal care and community programs are coordinated from its Kanab, Utah headquarters, the country's largest no-kill sanctuary. This work is made possible by the personal and financial support of a grassroots network of supporters and community partners across the nation.

To become a fan of Best Friends Animal Society on Facebook go to: //www.facebook.com/bestfriendsanimalsociety.