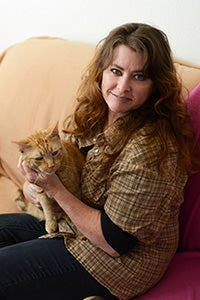 During her 12-year career as a professional writer, Liz dabbled in animal welfare by volunteering for several small nonprofits and Los Angeles Animal Services. In 2000, she co-founded a cat rescue organization and began devoting herself more seriously to animal welfare. By 2005, she made the decision to give up her writing career and move to Kanab, Utah, to work for Best Friends Animal Society.

She started her career at Best Friends Animal Society answering questions from the public on all aspects of animal care and welfare; transitioned into the manager role of that department; served as senior manager over national programs; and was the director of the community cat programs before landing in her new role. As senior writer for the Network, she has merged her two careers and once again gotten value out of that English degree!

After living in Kanab for 10 years, she relocated to Phoenix, Arizona, five years ago where she lives with a charming rabbit named Waffles and a clowder of misfit cats who frequently interrupt her work day by taking over the desk or wreaking havoc in some other part of the house.